Hitting a Double With “Big Blue” in Nine Months

As an investment strategist, I am often asked if I “eat my own cooking.” In other words, do I take the same risks in my own investment account that I advise others to consider?

Yes, I do. Of course, I have to abide by restrictions on exactly when I execute my personal trades to avoid a conflict of interest with my readers. But that rarely prevents me from being able to follow my own advice since most stocks bounce around for a while before moving strongly one way or the other.

That’s what occurred last October when I sent an update on International Business Machines (NYSE: IBM) to readers of Personal Finance. The day that article was published, IBM closed near $127. Just three weeks earlier it was trading at $150, but last fall’s stock market correction was especially tough on any company that delivered less than stellar Q3 results.

And that’s exactly what happened to IBM, as can be discerned from the title of my October 24, 2018 article: IBM Beats on Earnings but Misses on Sales. As I noted in that piece:

…at a share price of $130 IBM is valued at less than ten times forward earnings. In the current environment, earnings are secondary to sales so that number doesn’t mean much at the moment. However, once the top-line revenue figure starts to improve IBM’s earnings multiple should increase as well.

At the end of that article, I included a bit of advice that I ended up taking myself:

More aggressive investors may want to consider buying a LEAP, or long-term call option, on IBM that expires in January of 2020. For example, at the beginning of this week the $130 LEAP could be purchased for $10, resulting in a breakeven price of $140 fifteen months from now. Of course, you risk losing all of your money if IBM’s share price never gets back above $130 between now and then, but you could also double your money if all it does is get back to where it was just three weeks ago.

Last week, for reasons explained below, IBM traded above $150 for the first time this year. That means I had $20 of “intrinsic value” in my option, twice what I paid for it nine months ago. This week, I closed out my position and booked a big profit.

Hats Off to IBM

On July 17, IBM released Q2 results that were mixed but included a 5.4% increase (adjusted for currency) in sales from its Cloud & Cognitive Solutions group. And since the cloud is where everything seems to be headed these days, that was sufficient to drive IBM’s share price up more than 4% that day. 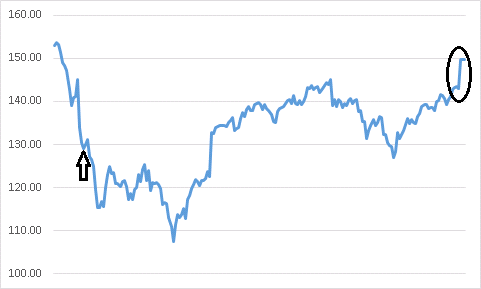 Also helping was a news release issued the previous day jointly by IBM and AT&T (NYSE: T). The two companies announced they will work together under a long-term agreement that stated, “AT&T Business will utilize Red Hat’s open source platform to manage workloads and applications.

Just one week earlier, IBM closed on its $34 billion acquisition of Red Hat announced late last year. At the time, some analysts worried that IBM paid too high of a premium and would suffer the consequences this year.

It’s too soon to determine how much financial value IBM will derive from this arrangement in revenue and cost savings. Regardless, the AT&T deal alone won’t completely dispel those concerns, but it proves the concept is viable.

Since IBM has proven it can grow cloud revenue without Red Hat, the assumption is future cloud sales will grow even faster. Just how fast is anyone’s guess, but that’s what makes the stock market so exciting.

Of course, excitement comes at a price. I don’t mind taking risks since I follow the stock market so closely, but you may not feel the same way.

If not, then I suggest you follow the advice of my colleague Jim Fink.

Jim is now making you a promise. If Jim doesn’t deliver 24 triple-digit winning trades over the next 12 months, he’ll fork over $1,950. Each time Jim has made this bold bet, he has delivered!

Jim has put together a new presentation, in which he discusses how to make 163% profits, whether the market is going up…down…or sideways. Want all the details? Click here now.