Sunset in the Energy Patch?

The Arabs have a proverb: “All sunshine makes a desert.” It means too much of a good thing can actually bring negative results.

Which brings me to U.S. shale producers. A crisis is brewing in the domestic energy patch and it affects all investors.

Production has been booming in North America, especially in the prolific Permian Basin in the southwestern United States. However, that’s been a double-edged sword. This output has offset OPEC production cuts, which in turn has put downward pressure on oil and gas prices.

The recent slump in energy prices is weighing on the U.S. shale industry, with top executives predicting another round of bankruptcies in the sector.

Crude prices were lifted by reports Tuesday from IHS Markit that Venezuela, the country with the world’s largest proven oil reserves, would suffer drastic declines in production due to its political and economic crises.

Over the long haul, crude prices have been volatile with downward momentum (see 12-month chart, compiled with data from the U.S. Energy Information Administration): 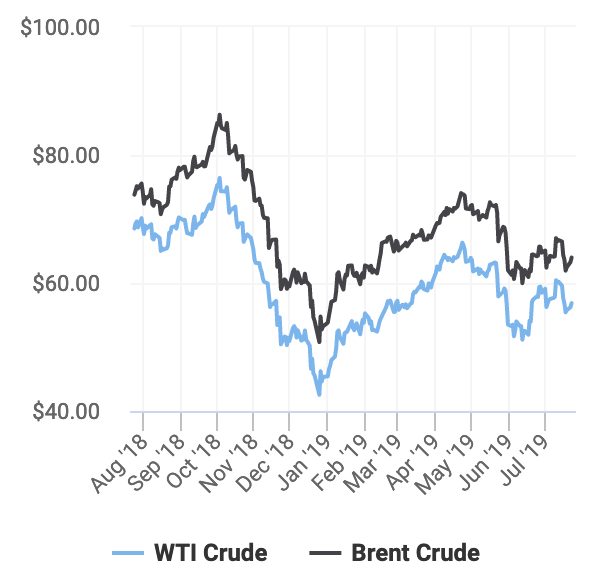 According to a recent survey from the Dallas Federal Reserve, falling energy prices have dampened spending and drilling among shale producers.

To be sure, oil and gas production continued to rise in the second quarter of 2019, but it did so at a much slower pace, disproportionately hurting oilfield services providers. These ancillary companies are the most sensitive to slowdowns in drilling and their margins are hurting. This slump is continuing in the third quarter.

Oil prices crashed in the summer of 2014, launching a long and brutal energy recession. The chief culprit was Saudi Arabia, which threw open the spigots to start a price war. The desert kingdom’s intention was to crush U.S. shale producers by pushing down the price of oil. Once their pesky American rivals were prostrate, the Saudi oil sheiks intended to grab their market share.

The Saudi strategy backfired…in spectacular fashion. Many shale producers survived, due to unexpected efficiencies spawned by technological innovation. But OPEC and its allies got hammered because they’re saddled with higher costs. Saudi Arabia’s oil revenues sank so low, it posed an existential threat to the House of Saud.

When prices started to recover in 2017-2018, oil producers suddenly forgot the lessons of history. They heavily borrowed to boost output and reap windfalls. Oil prices plunged (in sync with the stock market) in the fourth quarter of 2018, started to recover in early 2019, and they’re slumping again. Welcome to the energy roller-coaster; the above chart tells the story.

Now that prices are falling again, balance sheets in the shale industry are loaded with debt but margins are shrinking. It’s the familiar boom-bust cycle and when oil goes bust, the broader stock market often suffers collateral damage.

This dynamic seems counter-intuitive right now, because the world remains hungry for energy. Let’s turn to the gold standard for energy industry analysis, the BP Statistical Review of Energy. According to the 2019 edition released in June, primary energy consumption grew at a rate of 2.9% in 2018, nearly double its 10-year average of 1.5% per year and the fastest since 2010.

China, the U.S. and India combined accounted for more than two thirds of the global increase in energy demand. Consumption in the U.S. grew at its fastest rate in three decades (see chart below, from the Statistical Review): 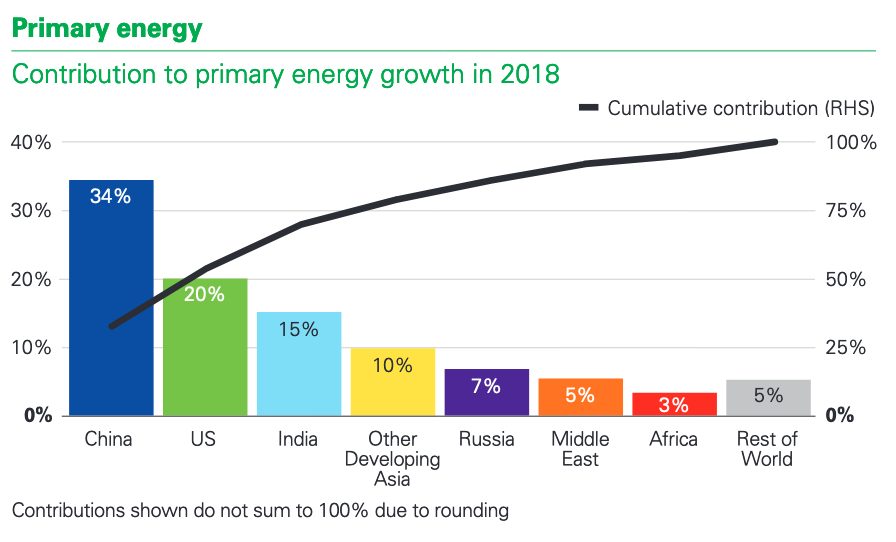 But therein lies the paradox. By honing their fracking technologies, domestic shale producers have gotten increasingly efficient, allowing them to produce more oil at ever-cheaper costs.

Even with crude oil prices in a funk, shale producers can still make money. The pursuit of more oil revenue and profits has contributed to the global oil glut, just as concerns are mounting over slowing global growth.

Concerns about weakening energy demand compelled OPEC and its allies this month to extend production cuts, but OPEC suffers diminished clout. America finally got the energy independence that it sought for decades, but the consequence has been a loss of equilibrium in energy markets.

With financial pressures bedeviling the balance sheets of U.S. shale companies, many are trying to drill their way out of their dilemma. Others are trying to boost margins by slashing costs and enhancing drilling efficiency. These desperate efforts can only go so far.

It’s not just the Permian, where activity has been the greatest. A crisis is brewing throughout the domestic energy patch. Think I’m being hyperbolic? Consider the words of Steve Schlotterbeck, former CEO of drilling company EQT Corp. (NYSE: EQT), the largest natural gas producer in the U.S.

At an industry conference in June, Schlotterbeck told attendees:

The shale gas revolution has frankly been an unmitigated disaster for any buy-and-hold investor in the shale gas industry with very few limited exceptions. In fact, I’m not aware of another case of a disruptive technological change that has done so much harm to the industry that created the change. While hundreds of billions of dollars of benefits have accrued to hundreds of millions of people, the amount of shareholder value destruction registers in the hundreds of billions of dollars. The industry is self-destructive.

According to a report released this month by the Institute for Energy Economics and Financial Analysis (IEEFA): “More bankruptcies are all but certain as oil and gas borrowers must repay or refinance several hundred billion dollars of debt over the next six months.”

The IEEFA said of first-quarter operating results for oil and gas drillers in the U.S. shale industry: “Another quarter, another gusher of red ink.” Conditions are expected to prove even worse when second-quarter results are tabulated. In turn, banks that hold these souring loans will take a hit. We’ve been down this dreary road before.

Rather than rely on conventional supply-and-demand methods, the fracking industry is trying to drill itself out of trouble. History shows that this is a doomed strategy. As the IEEFA notes in its report: “The fracking industry has been riven by a rash of bankruptcies over the past three years, which have continued in 2019.”

If you’re an investor without exposure to the energy sector, why should you care about all this? Because the broader stock market and the energy sector are inextricably linked. In fact, for the last couple of years at least, the prices of equities and energy have moved roughly in tandem.

By Wall Street’s reckoning, rising oil and gas prices are a sign of health in the overall economy. All economic activity requires energy, whether to manufacture goods, operate machines, or provide transportation. By some estimates, the energy sector’s share of the global economy exceeds 8%.

As the stock market continues to rise, we face the growing prospect of a pullback. Indeed, analysts at both Goldman Sachs (NYSE: GS) and Morgan Stanley (NYSE: MS) recently predicted a correction of 10% or more in the third quarter.

A crash in oil prices, combined with a wave of bankruptcies among shale producers, could trigger a broader stock market rout. On the list of risks to the bull market, add financial pressures in the U.S. energy patch.

It’s always difficult to predict the price of oil, especially amid perpetual tensions in the Middle East. The U.S. and Iran have been rattling sabers lately, with increasing odds of miscalculation. An outbreak of military conflict in the Persian Gulf could send oil prices soaring; a negative report about economic growth could send them plummeting.

Regardless, take defensive measures now. The Arabs have another proverb: “You can’t change the wind, but you can adjust the sail.”

Questions about energy sector trends and how they affect your portfolio? Drop me a line: mailbag@investingdaily.com