Want a Rate Cut? Careful What You Wish For

When the kids in my family start begging me for something that I know isn’t necessarily in their self-interest, I intone this familiar parental warning: Be careful what you wish for.

I now offer the same advice to President Trump and Wall Street. The Federal Reserve starts its two-day meeting today and the White House and financial community have been lobbying for an interest rate cut. But over the long haul, a cut could boomerang to hurt investors and the economy.

Fed Chair Jerome Powell pointed out in testimony this month before Congress that current economic “uncertainties” stem largely from Trump’s trade war, not from high interest rates. Most economists agree with him — well, at least the credible ones and not the partisan shills you see on television.

Read This Story: Why Business TV Is Bad for You

There’s a long tradition of the Fed staying above the political fray, but Trump revels in shattering norms and his stance toward the Fed is no exception. The president has been attacking his own Fed chairman with regularity, blaming the Fed’s monetary tightening for stock market sell-offs and weaknesses in the recovery.

The Fed is supposed to take the long view and not bow to temporary political expediency. The central bank has a dual mandate: price stability and maximum sustainable employment.

For his part, Powell has asserted his independence but this week, we’ll find out whether the Fed stands pat on rates or gives in.

Wall Street has been living in an upside-down world, where good news on the economy is viewed as bad because it could preclude a rate cut (and vice versa). It reminds me of Bizarro World in the Superman comic books that I read as a kid, where black is white, up is down, good is bad, and wrong is right.

After a decade of easy money in the wake of the 2008-2009 global economic meltdown, the Fed decided that it’s prudent to tighten the spigot to prevent inflation down the road. We’re also overdue for a recession. When the downturn finally hits but the Fed has been cutting rates, policymakers will have scant tools at their disposal to stimulate the economy.

By pushing up the prices of stocks, bonds and other assets that are already overvalued, more easy money could lay the groundwork for a financial collapse. For 10 years, easy credit has fueled a debt binge among corporations. Recessions tend to be deeper and longer when the preceding expansion was driven by borrowing.

But Trump has remained adamant. He tweeted yesterday:

“The E.U. and China will further lower interest rates and pump money into their systems, making it much easier for their manufacturers to sell product. In the meantime, and with very low inflation, our Fed does nothing — and probably will do very little by comparison. Too bad!”

The European Central Bank (ECB) lowered the interest rate for main refinancing operations to 0.00 in March 2016 and has kept it there ever since. In the meantime, the U.S. central bank has initiated eight rate hikes, of which seven took place after Donald Trump took office in January 2017 (see chart). 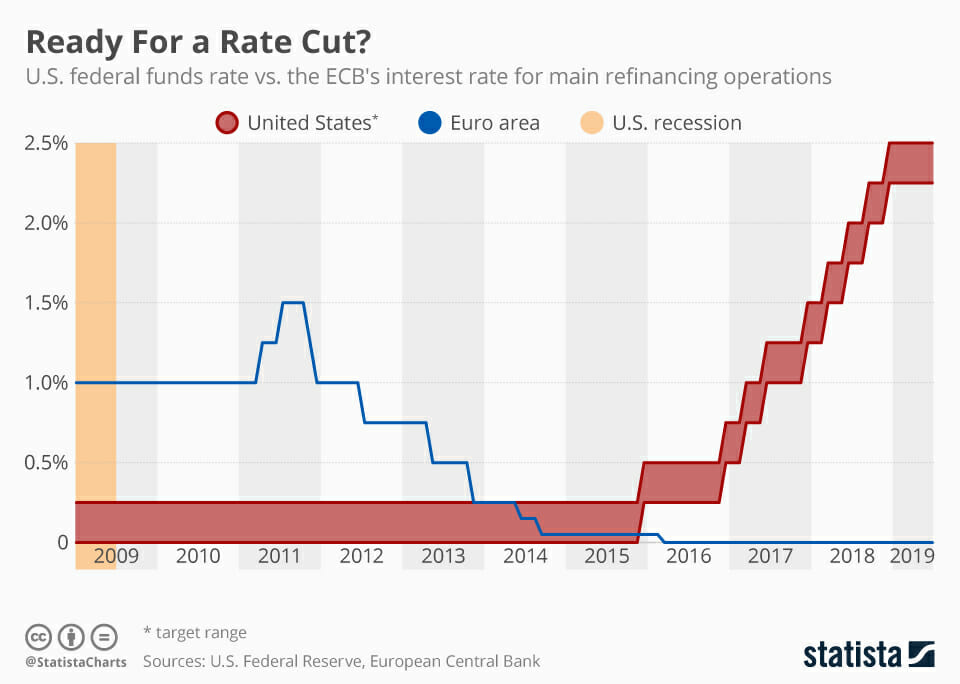 The stock market is pricing in close to a 100% chance of at least a 25bps cut, with a 43% chance for 50bps. Analysts tomorrow will pay close scrutiny to forward-looking comments in the Fed’s statement and Powell’s subsequent press conference. If Powell sticks to his guns and defies Trump’s arm-twisting, stocks could tank.

History shows ruinous inflation rears its head when governments succumb to the temptation to overstimulate the economy. Cutting rates, just so the party in power can get votes, is not responsible stewardship of the economy. At least, that used to be the conventional thinking.

Investors have grown complacent about inflation. The recent Consumer Price Index released by the Bureau of Labor Statistics showed core inflation (excluding food and energy) rose 2.1% year-over-year, exceeding expectations. Unemployment is at a 50-year low, which is fueling wage gains. The following chart tells the story (data from the Atlanta Federal Reserve, as of July 19): 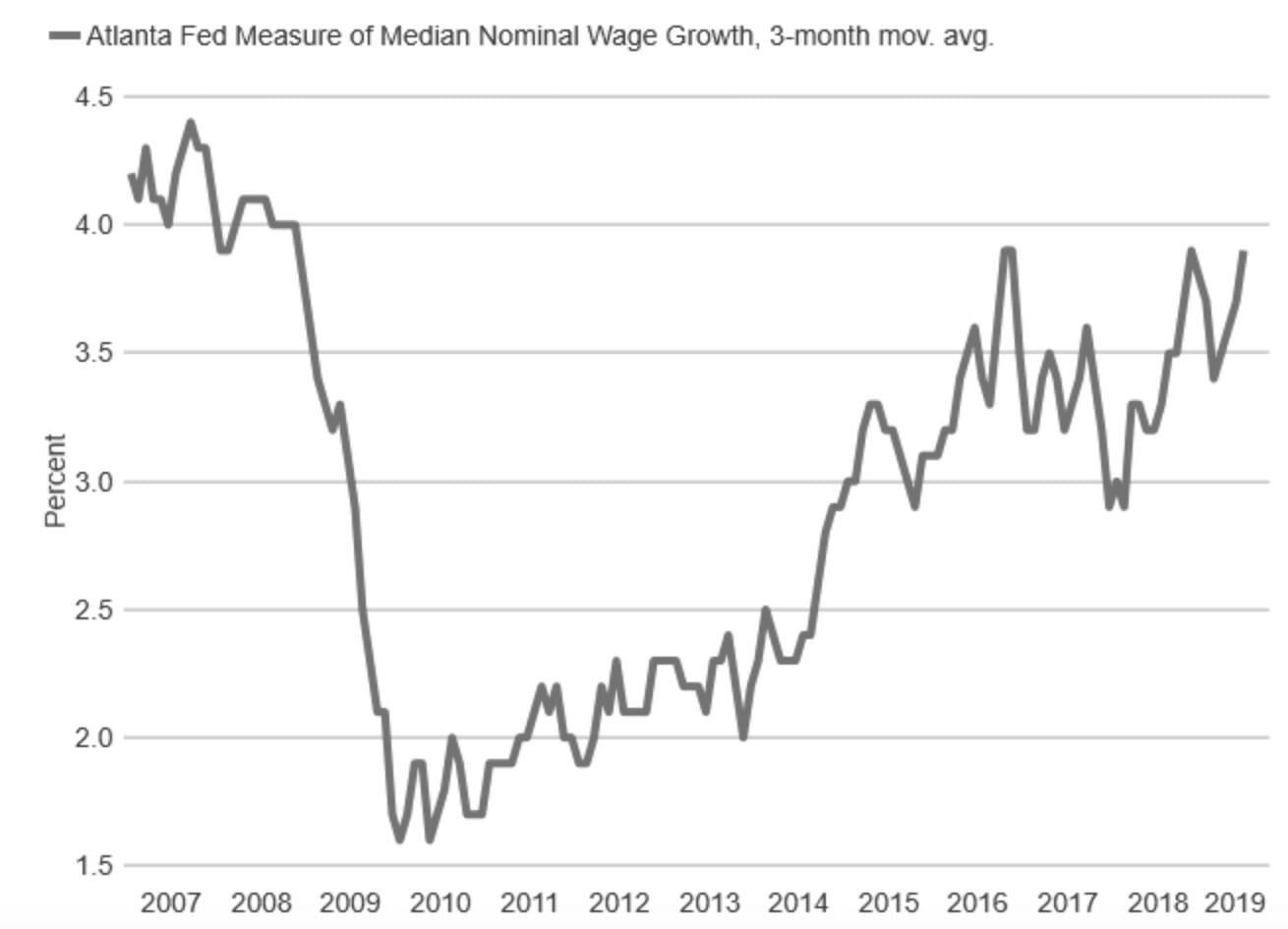 At the same time, tariffs are boosting prices. Costly tariffs are a major part of the inflation equation. Think a trade war can be averted? Sorry to dash your hopes, but it’s already underway. We’re seeing tangible harm in terms of canceled orders, disrupted supply chains, delayed deals, and general mistrust.

Keep this in mind: If tariffs push certain prices higher, it’s unlikely those prices will quickly come down when trade hostilities end.

In the past, investors have consoled themselves by assuming that most of Trump’s tariff threats have been negotiating tactics to intimidate trading partners into making concessions. This self-delusion is giving way to the realization that U.S. tariffs are real and destructive, as several corporations this earnings season report that tariffs are squeezing profit margins.

The seeds of inflation…

Despite the assertions of trade hawks, it’s companies — not governments — that pay tariffs. These costs are passed along to consumers.

To be sure, there’s a doom-and-gloom school of advisors who continually ring the inflation alarm bell, even when inflation is tame. They’re a tiresome bunch with hidden agendas. But as the saying goes, a broken clock is correct twice a day. And now, inflation should actually worry you.

One way to protect your portfolio is to increase your exposure to real estate, which has long been one of the most effective strategies to preserve wealth during inflationary periods.

Another sector to consider now is utilities, which have been outperforming this year. As with real estate, utilities are a “safe haven” hedge, especially in the late stage of an economic recovery. They provide essential services that people need regardless of economic conditions, which makes them inflation and recession-resistant. They’re also a buffer against the trade war, because they derive most of their revenue domestically.

As the Fed deliberates today and tomorrow and Wall Street roots for a rate cut, remember a lesson from children’s fairy tales: wishes often backfire.