How to Profit from the Summer Swoon

Do you believe market timing has merit? If so, now may be a good time to take action. The odds favor a major stock market decline in August or September.

Although it is commonly believed that October is historically the worst month for stocks, that is not actually the case. According to a recently released report from Yardeni Research, September has been the weakest month for stocks by a wide margin.

The good news is the best performing month of the year is July, with an average gain of 1.6%. The bad news is July is now over, and the months of August and September have a combined average return of -0.2%. See the following chart. 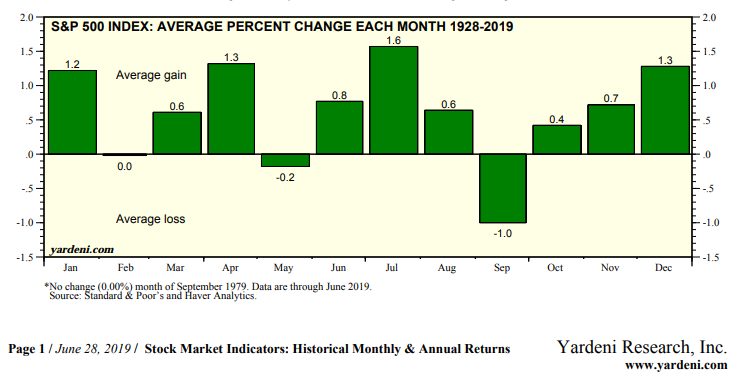 Granted, that’s only a slightly negative figure. However, the total average change from peak to trough during the July — September period is -2.6%. That’s not a huge number, but it is indicative of the extent to which the months of August and September can be particularly volatile.

If you are a long-term investor, it may not make sense to take any action based on these historical tendencies. But if you are a short-term trader or have a very low tolerance for risk, you may want to leverage this seasonal trend.

The simplest way to capitalize on stock market volatility is by trading put and call options on the S&P 500 Index. They are extremely liquid and are a pure play on the U.S. large-cap stock market.

Accordingly, the index would have to drop to 2,950 by the expiration date to break even on this option, which works out to a decline of roughly 2%.

That’s less than the -2.6% average peak-to-trough decline during that period as noted above. If enough investors were worried that a stock market correction may be imminent, these put options would be trading at a higher premium.

Their complacency may be your opportunity to cash in before things get rough. Last year’s stock market correction did not get going until October after the Federal Reserve intimated that it might need to raise rates aggressively to stave off inflation.

This year, the Fed now finds itself in the opposite position of justifying a cut in rates despite low unemployment and steady economic growth. Combined with weak second-quarter earnings results, the message to the market may be that a recession is looming.

In that type of environment, even a whiff of unexpected bad news could send the stock market tumbling.

Those same put options also can be used as portfolio insurance by long-term investors to guard against a stock market crash. In that case, buying a put option on the S&P 500 index at a lower strike price and with a longer expiration date makes more sense.

For example, using a strike price of 2,700 would allow for a correction of 10% before the option has any intrinsic value. Extending the expiration date out to January 2021 would protect all the way through next year’s presidential election.

In late July, that option could be bought for $180. That puts the breakeven level for this position at 2,520 for the index, about 20% below where it was trading at that time.

If the stock market never drops below that level by the expiration date, you are out the $180. That’s the bad news.

The good news is, your stock portfolio has retained most or all of its value, or even appreciated. Remember, buying a put option in no way limits your upside potential.

Think of it no differently than you would any other insurance premium. You hope you’ll never wreck your car or have your house burn down, but it’s nice to know you are covered if that happens.

There are other ways you can profit from stock market seasonality, and my colleague Jimmy Butts can show you exactly how to do that.

Jimmy Butts, chief investment strategist of the premium trading service Maximum Profit, has devised an investment system that beats the Wall Street insiders at their own game. And it works in up or down markets.

Jimmy’s method may seem illegal, but believe me, it’s perfectly legit. His system has shown the ability to generate $37,000 or more in additional income, with no added risk, within a year. Want to learn more? Click here for details.