The Geopolitical Game: Your Next Moves

Goldwyn was famous for his malapropisms, but it’s true, forecasting is a mug’s game. However, you can still prepare for known risks. I’ll show you how.

Stocks last week recorded their worst week this year on worries that escalating trade tensions and other geopolitical risks could further slow global economic growth. The second half of 2019 is experiencing worsening headwinds at home and overseas.

Some analysts are expecting a stock market correction this quarter, worries that have been exacerbated by the Federal Reserve’s apparent unwillingness to cut interest rates further in 2019.

To be sure, the U.S. central bank cut interest rates last week for the first time in 10 years, but the rate cut was modest and Fed Chair Jerome Powell suggested that rate cutting was over for the rest of the year.

With the rate cut in the rear view mirror, investor attention has returned to the trade war. Wall Street sometimes shows shortsightedness of breathtaking proportions. Such is the case with investor complacency over the risks of tariffs. The dismantling of the world’s multilateral rules-based trading system already is exacting investor pain.

Trade war in the 1930s worsened the Great Depression and stoked international clashes. Ten years after the 1929 stock market crash, World War II broke out. It has been 10 years since the market crash of 2008.

Consider the parallels. Perhaps our leaders should spend less time on Twitter and more time reading history. Or at least, more time studying the hard data. 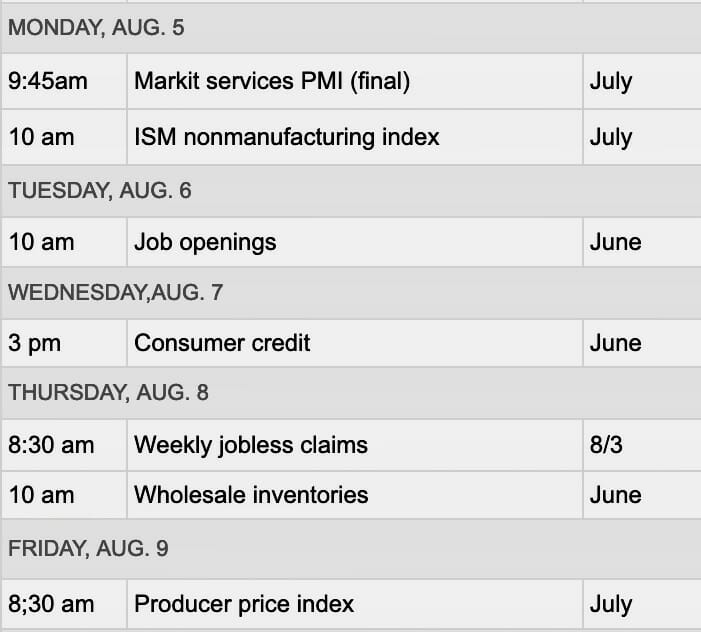 Here’s a table of key forthcoming economic data this week that have the power to move markets.

It’s also a busy week ahead for earnings reports, with about 60 S&P 500 companies scheduled to post operating results. The first earnings recession since 2016 appears to be emerging this season.

Britain’s new Prime Minister Boris Johnson is a pro-Brexit Tory who has threatened a no-deal (aka “hard”) Brexit if he doesn’t like the terms when the October 31 deadline hits. Such an occurrence would be a disaster for the British economy, with severe repercussions for the European Union (and by extension the global economy).

Britain is the world’s fifth-largest economy measured by nominal gross domestic product (GDP) and twenty-second largest by GDP per capita. Brexit is causing strains in the economy on the Continent and rifts within the Western alliance — developments that probably put a smile on the face of Russian President Vladimir Putin.

Indeed, there’s considerable evidence that Putin’s army of hackers spread disinformation ahead of the June 2016 referendum to tilt the scales in favor of Brexit. Perhaps the Cold War never really ended.

Trade tensions between the U.S. and China are another looming danger, but they go beyond the Trump administration’s desire for the Chinese to import more goods from the U.S. Global hegemony is at stake. We’re witnessing a “great power” struggle between America and China that will likely last for many years.

At the heart of this titanic battle is 5G technology, the “fifth generation” of wireless capability that provides faster and broader bandwidth than 4G. Under the “Made in China 2025” plan, the Middle Kingdom has pinpointed the key industries that it views as strategic and seeks to dominate. A linchpin of this march toward global dominance is 5G technology.

The race to deploy and control 5G around the world also entails a national security component, which has prompted the U.S. to initiate trade sanctions to protect proprietary intellectual property from acquisitions, offsets and outright theft.

The U.S. development of 5G is occurring entirely within the private sector, whereas China’s state-run economy is devoting considerable government resources to the effort. Beijing already has budgeted $400 billion towards development of 5G, a commitment that puts the U.S. at a disadvantage.

The Middle East is heating up again too, although admittedly the region is a perennial hot spot. Iran has been rattling its saber in the Persian Gulf, as the White House ramps up sanctions against the oil-producing country. The threat of military outbreak is ever-present.

Relationships between the U.S and Latin American countries also are on the downward slope. Venezuela’s authoritarian government stands out for its mismanagement of the economy, which has spawned social and political unrest, as well as harsh condemnation from the White House. Meanwhile, the U.S. and Mexico are part of a three-way trade deal with Canada that remains un-ratified.

The upshot for investors: Rotate toward defensive sectors, choose value over momentum, and keep plenty of cash on hand. Appealing sectors now are utilities, health services, and consumer staples.

These industries tend to perform well during the late stage of an economic cycle. They also offer a buffer against global uncertainty, because their sales tend to be domestic in origin. Make your defensive moves now, while you still can.