Is Trade Policy Driving The Market Off a Cliff?

Reckless world leaders are driving the global economy and financial markets toward the cliff’s edge.

Wall Street yesterday experienced its worst trading day of the year, in the wake of highly aggressive trade tactics from the U.S. and China. The main U.S. stock indices closed deeply in the red, with the following losses:

As of this writing on Tuesday morning, stocks had bounced back and were trading in the green, after China withdrew efforts to devalue its currency. China “blinked” first. But the damage was done…and the dangerous game of chicken continues.

For several months, Wall Street traders have assumed that President Trump is bluffing about trade sanctions against China and that somehow, his belligerent rhetoric is a negotiating tactic. I’ve consistently warned readers that the trade war is very real and won’t end anytime soon. The investment herd often succumbs to self-delusion. You need to face reality.

President Trump shocked financial markets last Thursday when he posted a tweet that threatened to impose 10% tariffs on the remaining $300 billion worth of Chinese imports. The Twitter broadside jettisoned what had been a brief ceasefire. Stocks started tumbling, a decline that was accelerated yesterday by China’s retaliatory move in letting its national currency the yuan slide.

The yuan (aka renminbi) on Monday sank to its lowest level in more than 10 years, crossing the psychologically important level of seven to the dollar for the first time ever. Beijing’s decision on the yuan was blasted by Trump in a tweet on the same day:

“It’s called ‘currency manipulation.’ Are you listening Federal Reserve? This is a major violation which will greatly weaken China over time!”

In a rare move, the U.S. yesterday officially declared China a currency manipulator, prompting China’s central bank to back off from devaluing the yuan.

Goldman Sachs (NYSE: GS), Morgan Stanley (NYSE: MS), and JPMorgan Chase (NYSE: JPM) are all predicting a stock market correction in the third quarter. A correction is when the market falls 10% from its 52-week high. The trade war was cited as a likely trigger.

U.S.-China trade tensions were further fueled yesterday when Beijing declared that Chinese companies have been directed to stop buying U.S. agricultural products and that China might slap import tariffs on U.S. farm products that were bought after August 3. But it’s the currency war that now occupies center stage.

A weaker Chinese yuan makes goods from the country cheaper and hence more appealing to foreign buyers, which worsens the U.S. trade deficit. For months, Trump has demanded a weaker greenback to make the U.S. more competitive with other countries. He claims other exporting nations have unfairly devalued their currencies against the dollar.

Accordingly, Trump has been pressuring the Federal Reserve to significantly ease monetary policy, to not only stimulate the U.S. economy but also to weaken the dollar’s relative valuation. The U.S central bank last week lowered its benchmark interest rate, but not as much as the president would have liked.

What’s more, Fed Chair Jerome Powell is on record as saying in June that it’s not the Fed but the Treasury Department that “is responsible for exchange rate policy — full stop.”

These tit-for-tat trade measures of the U.S. and China make a recession all the more likely. Trade wars are a negative-sum game. All sides lose. Wall Street is finally waking up to the lose-lose proposition of protectionism.

According to data released August 5 by the research firm Statista, the gap between imports to and exports from the U.S. climbed to a 10-year high in the first half of 2019. This widening of the trade deficit occurred, despite this year’s flurry of tariffs. Meanwhile, imports from China dropped by more than $30 billion (see chart). 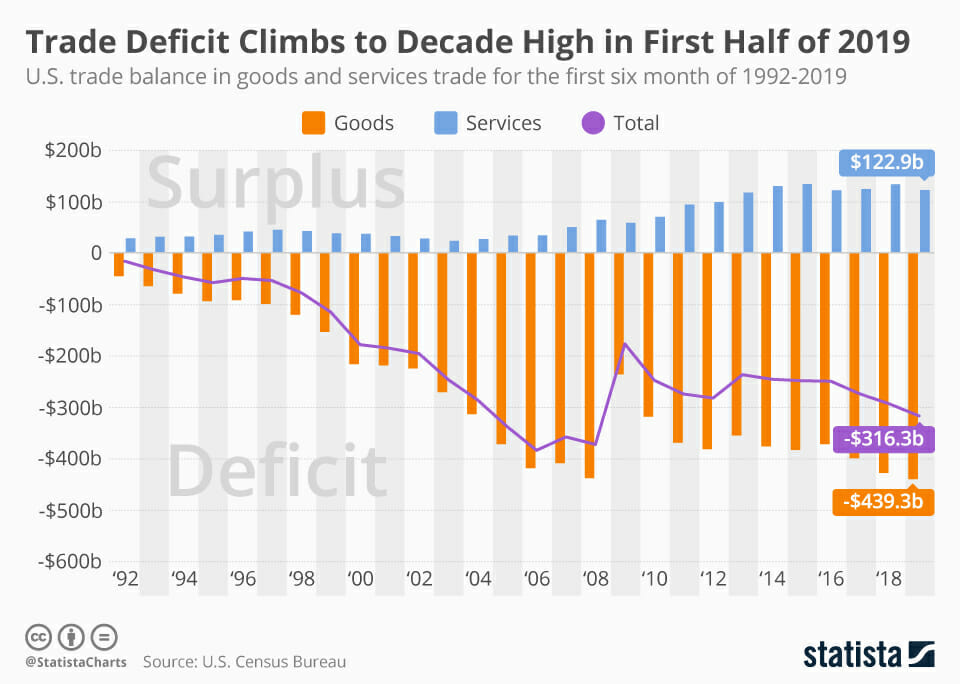 Trump has been boasting that as China pays for new tariffs, the money is filling the coffers of the U.S. Treasury. This is false. Companies pay tariffs, not countries, and these added costs are passed along to consumers in the form of higher prices.

New data released Monday on the services sector reflect the damage of the trade war. The Institute for Supply Management’s non-manufacturing, or services, index slowed to a reading of 53.7% in July, down from 55.1% in June and missing consensus estimates of 55.5%. July’s reading was the worst since August 2016; the index stood at 59.7% in February.

A reading above 50 indicates expansion in the sector. July’s drop was pronounced (see chart). 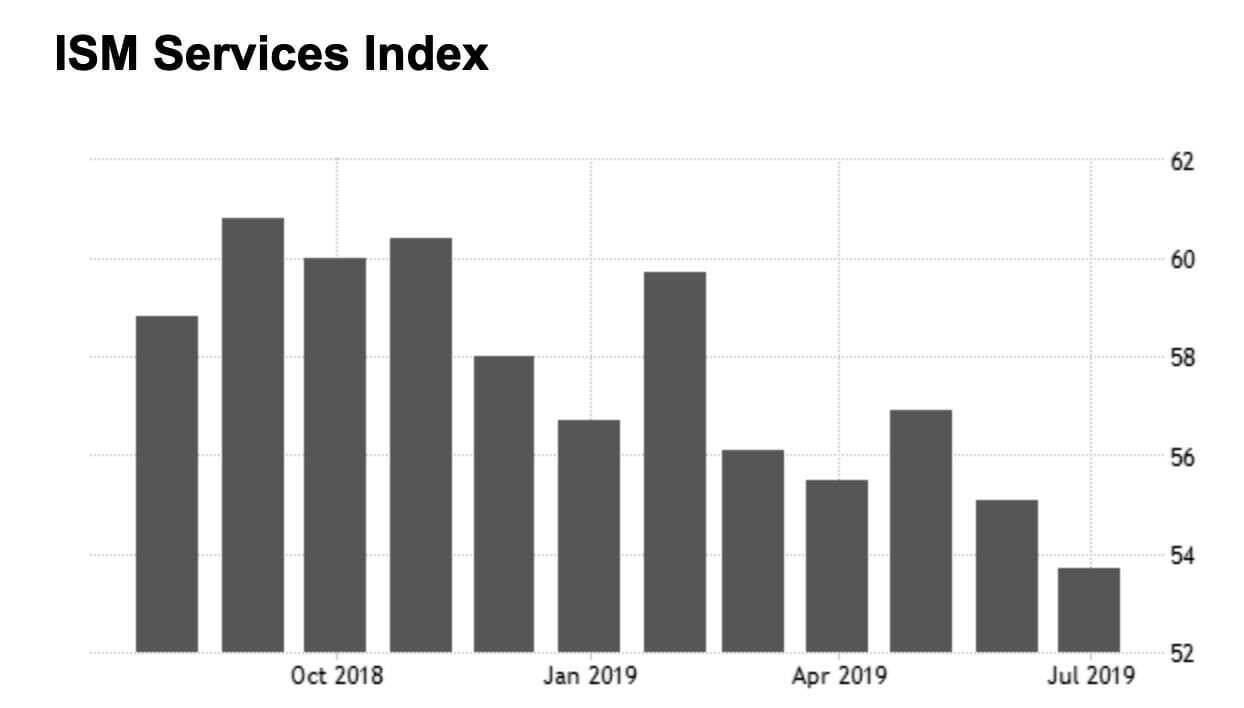 According to the ISM report:

“The non-manufacturing sector’s rate of growth continued to cool off. Respondents indicated ongoing concerns related to tariffs and employment resources. Comments remained mixed about business conditions and the overall economy.”

The July decline in services follows the ISM’s report last week that showed a fourth consecutive month of slower growth in manufacturing.

Meanwhile, we’re witnessing a red flag that’s a classic warning of recession. Rates on 10-year notes sank to 1.73% on Monday. At one point, they yielded 32 basis points less than three-month bills — that’s the most extreme yield-curve inversion since the lead-up to the 2008-2009 financial meltdown.

How you should trade now…

When the long-awaited stock market correction finally hits, a wide range of overvalued stocks are certain to plunge further.

The hardest hit stocks over the past couple of days have been pricey global technology shares, especially the makers of semiconductors and consumer gadgets, as tariffs undermine supply chains, boost costs and dampen demand. The high-flying FAANG coterie have gotten clobbered.

In previous columns, I’ve advised you to pare back your exposure to overvalued, large-cap tech stocks (especially in Internet niches such as social media) and re-balance your portfolio toward defensive sectors. This advice still makes sense; it’s not too late.

The recent flare-up in trade hostilities has prompted investors to flee toward safe haven assets, such as real estate, utilities and gold. You should do the same.

Gold isn’t the only crisis hedge among precious metals. Consider silver, which tends to be less volatile than the Midas metal because it also sports several industrial uses. As global turmoil and uncertainty show no sign of abating, gold and silver make an effective hedge to protect you on the downside—while also offering opportunity for appreciation.

For new stock purchases, use a “stop-loss” order with your broker. Using this order, the trader will pre-set the value based on the maximum loss the investor is willing to tolerate. If the price drops below this fixed value, the stop loss automatically becomes a market order. As soon as the price falls below the stop level, the position is closed at the current market price, which prevents any additional losses.

Increasingly hostile trade tactics from the world’s two largest economies are creating economic turmoil and market volatility that will only worsen this year. Buckle up and don’t let your portfolio plunge off the cliff.