Searching for a stock to own that isn’t vulnerable to trade war fears or central bank monetary policy? If so, look no further than Weight Watchers International (NSDQ: WW). The company released Q2 results on August 6 that pushed its share price up 40% while the overall stock market was gyrating wildly. 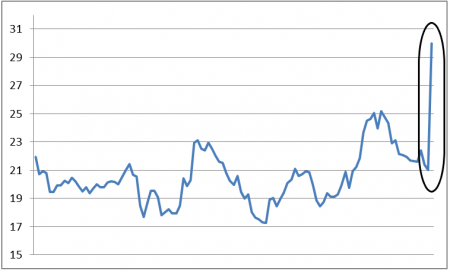 There aren’t many businesses that are impervious to the prevailing macroeconomic forces roiling the market. Even great companies can find themselves on the wrong side of trade tariffs or Federal Reserve rate cuts.

But Weight Watchers is one of the few businesses that can grow revenue and earnings under a wide range of financial conditions. That’s due to the nature of its product, which the company no longer describes as weight loss.

Instead, Weight Watchers has rebranded itself as WW and has a new mission statement: “Wellness that Works.” The company now emphasizes the emotional and physical benefits that accompany weight loss. Rather than simply helping its customers drop a few pounds, Weight Watchers enables them to:

When put that way, placing a price tag on the value of its products becomes considerably more difficult. Coincidentally, that also allows the company to charge more for its products.

As the old saying goes, you can’t put a price on happiness. But you can put a price on losing those nagging 20 pounds by the time your next high school reunion rolls around.

On the surface, Weight Watchers’ Q2 results appear underwhelming. Although subscriber growth was up 1.5% on a year-over-year basis, revenue was down nearly 10%. The company’s gross margin narrowed slightly (58.5% versus 59.7%), and its earnings per share (EPS) fell from $1.01 to $0.78.

Normally, performance like that would sink a stock, especially when those results are released the same week that the rest of the stock market is getting hammered.

Unless, that is, those numbers are far better than what Wall Street analysts had feared. More importantly, Weight Watchers also upgraded its full-year EPS guidance to $1.55 – $1.70. That’s far above the $1.52 consensus estimate that the market was expecting.

The next day, a Bank of America (NYSE: BAC) analyst changed her opinion of Weight Watchers from underperform to buy. She also raised her one-year price target to $27, which the stock blew bay later that same day when it crested above $30.

That’s still less than half the $75 share price WW was trading at a year ago. In July 2017, the stock briefly traded above $100 before plummeting to less than $20 last February.

That means the only WW shareholders that have a profit in the stock are those that bought it during the past six months. All the others are still inside out on this position, but now they have hope.

Hope Is Not a Strategy

At the moment, hope is about the only thing keeping most stocks from going in the tank:

Regardless of what we hope, the financial markets will ultimately have the final say. At the moment, what the markets are saying isn’t encouraging.

For that reason, a company that offers its customers the opportunity to feel better about themselves may be one of the few bright spots in an otherwise dismal environment.

Historically, roughly 40% of Weight Watcher’s new subscribers join during the first quarter. That makes sense, as two of the top New Year’s resolutions in 2018 were to “Eat healthier” and “Get more exercise.”

For the first time in many years, Weight Watchers’ subscriber base did not decline during the second quarter. It remained constant at 4.6 million, about 20% above where it stood at the end of 2018.

I would not be surprised if Weight Watchers’ subscriber base actually grows during the current quarter. When the things we cannot control become unpleasant, it is human nature to focus on what we can control.

What we can control is our behavior. How we eat. How we exercise. How we structure our lives to manage stress.

Despite its big jump in price, WW’s forward price-to-earnings (P/E) ratio of 15 is roughly 20% below the 18 multiple for the S&P 500 Index. More impressively, its price/earnings to growth (PEG) ratio of 0.38 is far below the upper threshold of 1.0 that legendary mutual fund manager Peter Lynch felt was fair to pay for a small-cap growth stock.

That begs the question as to whether Weight Watchers an undervalued growth stock, or an overpriced value stock.

Based on its past performance, it is difficult to make a growth argument for Weight Watchers. Both sales and earnings fell during the past year.

However, there isn’t much basis for the value argument, either. Weight Watchers has not paid a dividend since 2013 and probably won’t anytime soon.

Weight Watchers has $180 million in cash and no long-term debt. That means it can reinvest its free cash flow into the growth of its expanding revenue model that includes food products, mobility apps, and “experiences” such as group travel and workshops.

It remains to be seen if Weight Watchers can take advantage of the current market sentiment to capture more subscribers. I don’t believe the stock market’s recent troubles will magically disappear.

And now that the presidential election cycle is underway, we can look forward to 15 more months of escalating political tensions. While that is all happening, people will be looking for something to make them feel good about themselves.

There aren’t many companies like Weight Watchers, but there are other ways to identify stocks that will outperform the market.

One expert with an uncanny ability to pick market-beating investments is Jim Fink.

Jim is chief investment strategist of the elite trading services Options For Income, Velocity Trader, and Jim Fink’s Inner Circle. He has agreed to show 500 smart investors how his “paragon” trading system could help them earn 2,500% in just one year, guaranteed.

Want to learn all the details? Click here now.