How to Avoid “Wealth Evaporation”

The world is starting to look a lot like 2008. The global financial system is awash in debt, civil societies are wracked by political turmoil, and equity markets are overvalued relative to historical benchmarks. Catalysts for a correction are abundant in America and overseas.

Since the financial crash more than a decade ago, the low-interest-rate policies of central banks have inflated both stock prices and debt around the world. Historically, asset bubbles fueled by easy money crash painfully — it’s been true ever since the South Sea Bubble of 1720.

It’s been a crazy week so far in the markets. Stocks yesterday banged a U-turn, with the Dow Jones Industrial Average erasing a 589-point skid to close essentially flat. After getting spooked by falling bond yields, investors regained confidence by focusing on economic positives, such as the resilient consumer. But wild intraday volatility does not reflect a healthy market.

The only question is not whether a crash will soon occur, but how big it will be and which sectors will get clobbered the worst. Sure, after taking a beating, fundamentally strong investments eventually bounce back. But there’s an even worse danger: toxic stocks that evaporate in value.

Typically, companies have cash reserves and spare borrowing capacity, which means they take time to go bankrupt. But as this week’s stock market losses demonstrate, strains are mounting on companies with vulnerable balance sheets. If you’re near or in retirement, you can’t afford to hold “portfolio killer” stocks.

Read This Story: Wake Up and Smell The Coffee

In a crash and credit crunch there will be a shakeout, with companies bleeding cash and going under for want of financing. Others will be forced to take “rescue” financing packages on onerous terms.

Among the sectors where permanent losses of wealth are most likely right now are energy and technology.

In the energy sector, the prolonged decline in oil prices has put a huge financial strain on many second-tier operators with expensive reserves. In the second half of 2019, you can expect to see substantial energy sector bankruptcies, with losses for bondholders and stockholders.

According to a recent survey from the Dallas Federal Reserve, falling energy prices have dampened spending and drilling among shale producers.

To be sure, oil and gas production continued to rise in the second quarter of 2019, but it did so at a much slower pace, disproportionately hurting oilfield services providers. These ancillary companies are the most sensitive to slowdowns in drilling and their margins are hurting. This slump is continuing in the third quarter.

As the following 12-month chart shows, crude oil prices have been volatile and trending downward (data from the U.S. Energy Information Administration). The U.S. benchmark West Texas Intermediate (WTI) hovers at $52 per barrel. Brent North Sea crude, on which international oils are priced, hovers at $57/bbl. 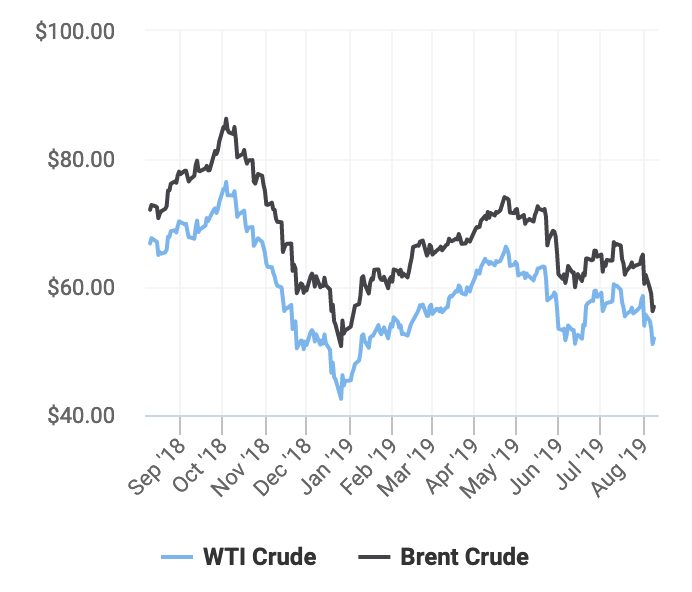 The technology sector is particularly susceptible to a meltdown as well. Tech companies in their early stages typically generate losses and plow revenue into research and development. However, the definition of “early years” has expanded in this cycle, and many tech firms have survived for a decade or more, raising venture capital at higher and higher prices, while still taking losses.

Bull runs often are propelled by a relatively small number of strong stocks that are market leaders. Since 2015, the broader market has owed much of its ascendancy to the five FAANG stocks: Facebook (NSDQ: FB), Amazon (NSDQ: AMZN), Apple (NSDQ: AAPL), Netflix (NSDQ: NFLX), and Google parent Alphabet (NSDQ: GOOG).

All five FAANG stocks have taken a beating lately, largely because of trade war and recession fears. When market leaders tumble, the rest of the troops typically follow.

Not so “Nifty” anymore…

As tempting as it might be, piling into only a handful of market leaders is a mistake. The fate of the “Nifty Fifty” is instructive.

When I was a kid growing up during the go-go 1960s, prosperity seemed boundless. Emblematic of the era’s economic exuberance were the Nifty Fifty.

The Nifty Fifty comprised a group of buy-and-hold stocks that were popular among individual and institutional investors. I remember hearing my father tout the virtues of these stocks; he called them “one decision” investments. His portfolio was heavily weighted toward them.

The Nifty Fifty got crushed the worst. By 1974, my dad was cursing the stocks he once praised. The lesson stuck with me: it’s easy to fall from grace.

A crash can set back retirement plans by many years. It can take years to break even from a 20% loss. The larger the investment, the longer it takes to bounce back.

Stay invested, but avoid aggressive risk-taking. Here’s a prudent portfolio allocation now: 50% stocks, 25% hedges, 15% cash, and 10% bonds. About 5%-10% of your hedges portion should be precious metals such as gold and silver. Other hedges include commodities and agriculture-linked investments.

When the downturn hits and nest eggs get clobbered, many investors will be forced to work through retirement. Does the prospect of working in your supposed golden years appeal to you? I didn’t think so. Amid today’s headline risks, proper allocations and careful stock picking are more important than ever.