How to Profit from Wall Street’s Carnage

From my occasional cinematic allusions, readers of Mind Over Markets have figured out that I love movies. Well, if the stock market were a movie right now, the director would be Quentin Tarantino.

Damage from tariffs and the concomitant slowdown in global growth have stoked recession fears — and a bloodbath on Wall Street. Exacerbating the pressure is the inverted yield curve. The U.S. Treasury yield curve yesterday inverted for the first time since June 2007, a time-proven warning of a looming recession.

The declines for the three main stock market indices yesterday were 3.05% for the Dow Jones Industrial Average, 2.93% for the S&P 500, and 3.02% for the Nasdaq. The decline was broad based, with no sector unscathed. It was the Dow’s worst trading day of the year. The CBOE Volatility Index (VIX) yesterday jumped 27%.

The mayhem seemed to abate today. As of this writing on Thursday morning, the three indices were hovering in the green, although stocks struggled for traction in early trading and bounced between gains and losses.

The destabilizing trade war still occupies center stage, as China indicated that it wouldn’t back down in the tit-for-tat tariff fight.

The Chinese government on Thursday stated it will “have to take the necessary countermeasures” if President Trump carries out his threat to impose 10% tariffs on an additional $300 billion worth of Chinese-made goods from September 1. However, in later remarks, Beijing said it hoped that compromise was still possible, which helped U.S. markets today open in modestly positive territory.

But it’s not just trade. Several negative factors are keeping investors and corporate leaders off balance.

If they sense a recession is on the way, many investors will start to invest in long-term U.S. Treasury bonds, because they’re pessimistic about the short term. Bond prices and yields move in opposite directions.

Germany, the economic powerhouse of the European Union, released data yesterday that showed the country’s gross domestic product (GDP) growth shrank by 0.1% on an annualized basis, between April and June (see chart). 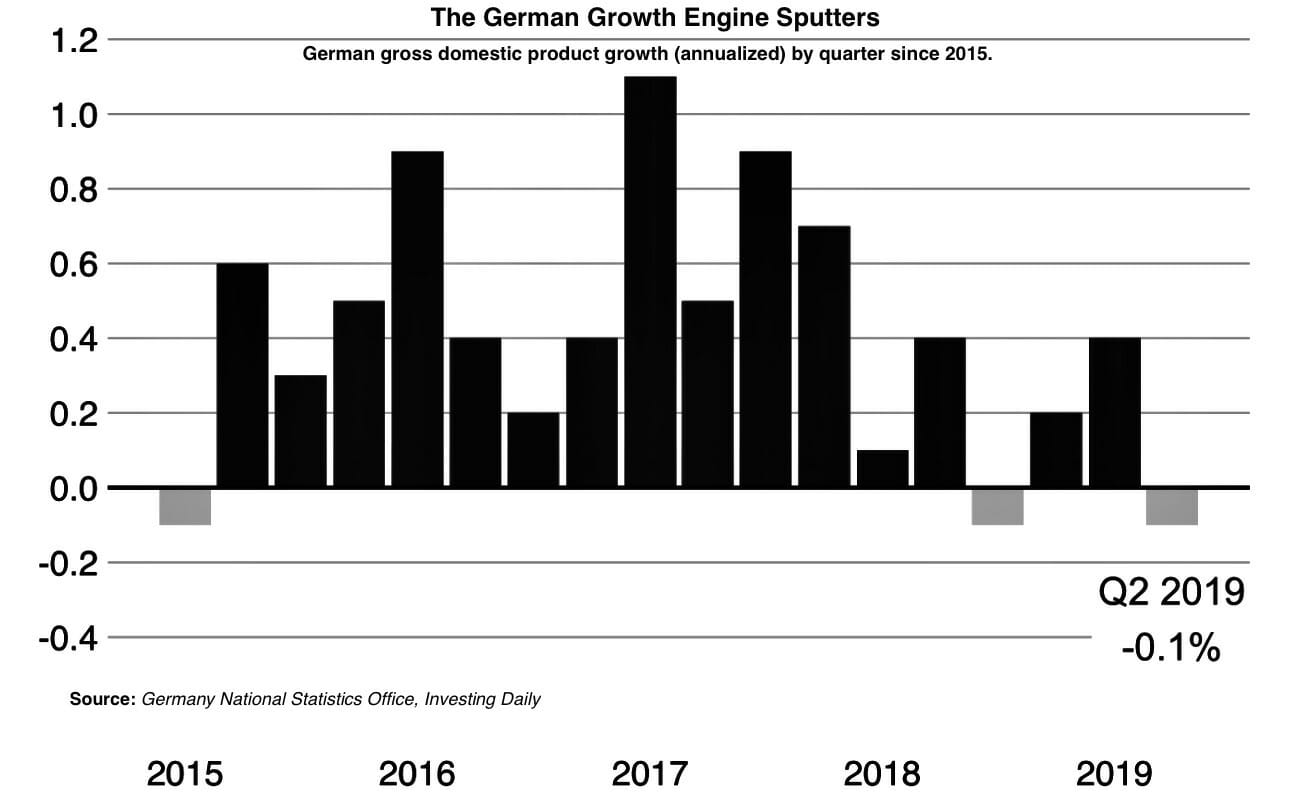 Analysts said the main culprit for Germany’s slowdown was increasing global trade tensions. The country is export-driven and especially relies on automobile manufacturing, a sector that has taken a hit because of the trade war. Exports only account for 12% of U.S. GDP but nearly 50% of Germany’s.

President Trump has vowed to push German luxury cars off American roads, declaring that the sight of Mercedes luxury sedans on the streets of Manhattan offends him.

The White House has threatened to impose tariffs on European cars, a prospect that would clobber an industry that’s a major employer (and source of pride) in Germany. When Germany sneezes, not just Europe but the global economy catches cold.

Correction triggers abound. Even if the trade war is somehow resolved (and don’t bet on it), plenty of other fears about growth will probably sow further volatility and sell-offs.

Public and private debt levels are dangerously high around the world; European banks are shaky; right-wing populism is destabilizing Western democracies; Britain’s planned departure from the European Union (aka Brexit) is descending into chaos; overseas markets such as Argentina are teetering on the brink of collapse; India and Pakistan are rattling nuclear sabers; and China’s economy is cooling.

New data this week showed China’s factory output in July rose 4.8%, its slowest pace in 17 years. Meanwhile, China’s GDP growth in the second quarter of 2019 came in at 6.2%, on an annualized basis (see chart). It was the weakest number since 1992. 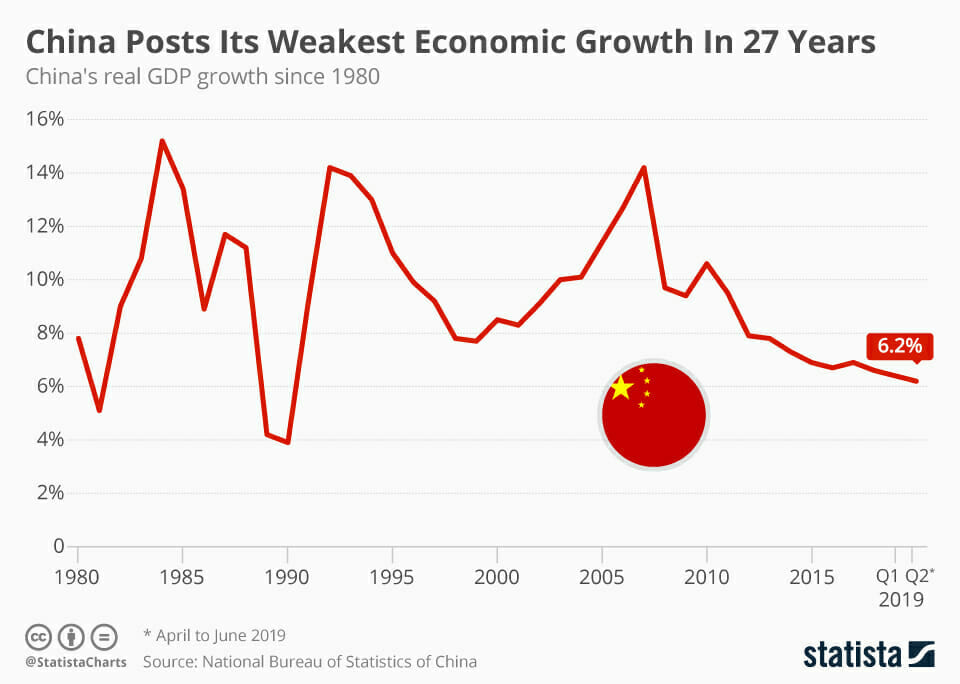 The latest surveys from the world’s industrial purchasing managers show that the manufacturing sectors in Japan and Britain are contracting as well. These weaknesses are weighing on commodity markets, with prices for copper and crude oil tumbling.

The ripple effects of this global slowdown will inevitably reach our shores. Economists at Bank of America (NYSE: BAC) have put the chances of a recession in the U.S. within the next 12 months at one in three.

But there’s a redeeming factor to these woes. There’s usually a lag time of at least several months between the occurrence of an inverted yield curve and an actual recession. This lag could provide a window of opportunity for bargain hunting, as intrinsically strong stocks get caught in the downdraft. Take heed of these words:

“The time to buy is when there’s blood in the streets.”

Attributed to the 18th century financier Baron Rothschild, this often repeated phrase means that investors in the midst of a market panic should seek fundamentally strong stocks that have been unfairly driven down in price by the irrational fear of the crowd.

Pessimism is on the rise and Wall Street’s bears are coming out of hibernation. Bear markets in stocks are defined as downturns, from peak to trough, of at least 20%. Since 1929, the U.S. stock market has undergone 25 bear markets, an average of one every 3.4 years. We’re overdue. The most recent bear market ended in March 2009, more than 10 years ago.

Bear markets usually don’t occur without an economic recession and several leading indicators point to one on the horizon. An increasing number of money managers, corporate leaders and economists are predicting a recession in 2020. When it hits, Uncle Sam’s hands will be tied.

By implementing regressive tax cuts and massive deficit spending, Washington, DC embarked on an extraordinary gamble. When the next recession occurs, fiscal and monetary policymakers will have fewer tools at their disposal.

The laws of economic cycles haven’t been repealed; expansions never last forever. And bear markets don’t necessarily need a recession. Since 1946, there have been four bear markets without a recession.

In the context of this uncertainty, you should be proactive and take decisive measures to simultaneously hedge your portfolio and profit. Consider pocketing at least partial gains from your biggest growth stock gainers; maintain exposure to precious metals (gold and/or silver) as part of your hedges; elevate cash levels; and use “stop loss” orders. My August 9 story provides additional actionable steps.

I’m not necessarily saying that another 2008-type crash is imminent. Maybe the next market downturn will be relatively mild, and maybe it will be postponed for a few more months. Even with Wall Street’s recent volatility, the major indices still stand near record highs. But prudent investors should get ready now in the late cycle…before it’s too late. Is the bull market on its last legs? Bloody likely.

Questions about late-cycle investing? I enjoy hearing from readers: mailbag@investingdaily.com