Each of the last seven recessions — going back to 1969 — were preceded by this yield curve inversion. This was the first time the inversion has happened since June 2007, which was just before the last U.S. recession.

Investors are becoming increasingly nervous, seeking safer venues than equities. What should you do as an investor? Or you might have an even more fundamental question: “What the heck is a recession anyway?”

A country’s gross domestic product (GDP) represents the value of goods and services produced. For the United States, this was $20.5 trillion in 2018. Economies go through cycles of expansion and contraction. A recession is generally defined as two consecutive quarters of GDP contraction. (A depression represents a deeper and generally more protracted GDP contraction.)

The U.S. economy has been expanding for 11 years, the longest economic expansion in U.S. history. But some economic indicators are weak and several potential events could precipitate a recession. A slowdown in consumer spending, which could be impacted by the ongoing trade war with China, may be the catalyst that pushes the U.S. into recession.

Because recessions mark a downturn in economic activity, stock market corrections and recessions go hand-in-hand. A recession can cause the stock market to plunge, or vice versa. In 2008, at the start of the Great Recession, the S&P 500 declined by 37%. As a result, investors tend to become very cautious when recession indicators begin to flash.

What should you do? If you are a long-term investor — which I define as someone with a time horizon longer than five years — it’s probably best to just ride it out. If you sought safety every time someone thought a market correction was due, you would probably under-perform the market over time.

You might even view it as a buying opportunity. Certain segments of the economy perform better during different periods of the business cycle. During the late-cycle stage, which is where the economy is presently, consistent over-performers are defensive and inflation-resistant sectors: the energy sector, the health care sector, and the materials sector. That hasn’t been the case lately, however, as health care and energy have both under-performed.

But the health care, utilities, and the consumer staples sectors are of considerable interest during the late business cycle, for two reasons. First, they generally over-perform during this phase. In fact, two of the three top-performing S&P 500 sectors over the past year have been utilities and consumer staples.

But these are also the three sectors that have historically held up well during a recession (see table). 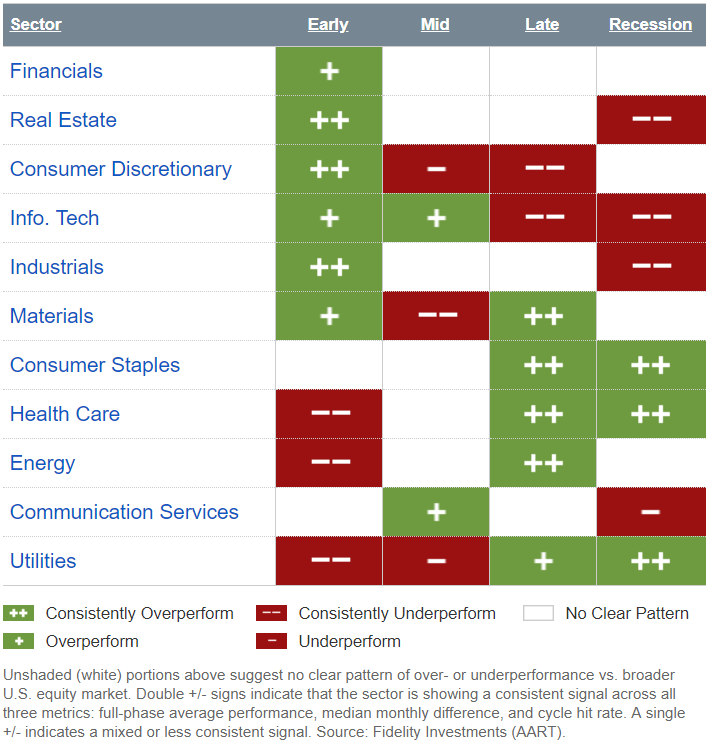 So if you are concerned about recession, but have a long time horizon, then you might consider accumulating those sectors that tend to do well both during the late cycle and during a recession.

If you have a shorter time horizon, you need to be appropriately allocated into safer fixed income options. For any funds that you may need within five years, you should get to these types as soon as possible. The potential for a recession adds urgency to this need. In last week’s column, I discussed potential fixed income investments that could fit your portfolio.

Amber is a financial expert but she’s also a military veteran. Amber served with distinction in Operation Iraqi Freedom. While deployed overseas with military intelligence, she learned how to interpret disparate data to predict likely outcomes. Upon her return to civilian life, Amber honed this skill to find money-making opportunities.

Want to learn the secrets to Amber’s recession-resistant savvy? Click here for a presentation.