Late-Cycle Investing (Before It’s Too Late)

The four most dangerous words in the English language: It’s different this time.

Whenever I hear an investor utter that statement, I slap my forehead with my palm. Shouldering more risk because you think the old rules no longer apply is a hallmark of the “dumb money” crowd.

Timeless laws of finance and economics always hold true, regardless of the era. Notably, in 1929 and again in 1999, investors thought the good times were boundless and assets would keep going up, up, and up. They were spectacularly wrong.

I’m reminded of a Wall Street parable. A man fell off the roof of a high-rise building. At each floor on his way to the pavement, he’d exclaim: “So far, so good!”

Yes, the bull market still lives. But the laws of gravity haven’t been repealed.

The global economy is showing signs of slowing, with three out of four economists in a recent survey predicting a recession by 2021.

President Trump blames recession fears on “fake news” and accuses the media of purposely talking down the economy to hurt his re-election chances. An increasing number of politicians these days decry as “fake” any news coverage they simply don’t like, even if it’s accurate and fair.

But facts are stubborn things. And the facts indicate that a recession lurks around the corner.

Behind closed doors at the White House this week, Trump’s aides have been scrambling to prepare for a recession. One much-discussed remedy is a payroll tax, although it probably wouldn’t do much to stem a downturn.

Trump also has been pressuring the Federal Reserve to further reduce interest rates. Another rate cut probably wouldn’t help much either — although it would tie the Fed’s hands down the road when the recession eventually hits.

It’s a curious contradiction: Trump dismisses recession talk as a lot of scaremongering from his opponents, but at the same time, a worried White House is calling for stimulus measures.

Here’s the real story: We’re long overdue for a recession and the hard data suggest that one is likely to hit within the next 12-18 months. Are you prepared?

Since the end of World War II in 1945, there have been 11 periods of expansion, lasting an average of 58 months (4.8 years). The current expansion is more than a decade long.

Accelerating economic headwinds include the U.S.-China trade war, sputtering growth in the European Union and China, and declining manufacturing activity in the U.S.

The nonpartisan Congressional Budget Office (CBO) said in a new report Wednesday that economic growth is weaker than possible because tariffs are hurting business investment by generating uncertainty. The CBO also said that tariffs are raising costs for businesses and consumers.

This trade war will drag on indefinitely. It should be a big factor in your investment decision-making.

Does the specter of recession and the uncertainty of trade war mean you should avoid growth stocks altogether? Not by a long shot.

You can still find reasonably valued growth stocks that are poised for outsized gains. The key is to focus on strong financial metrics that include low debt, robust free cash flow, and positive projected earnings growth. It’s also important that these companies provide products and services that customers will need well into the future.

The other key is to pick the right sectors, which also means you need to know where we stand in the business cycle.

The business cycle is the rise and fall of economic activity, which historically has followed a recurring and predictable path. It starts with early expansion, characterized by rapid growth as the economy emerges from a downturn. Growth evolves into maturing expansion, as companies hire more workers, consumers spend more money, wages rise, and inflation kicks into gear.

In the late-cycle expansion, where we currently find ourselves, imbalances emerge, inflation flares, and the Federal Reserve steps in to tighten the monetary spigot. The inevitable recession occurs…and then the cycle starts anew.

What’s helpful to you as an investor is that certain sectors of the economy have typically outperformed or underperformed the broader market, depending on the stage of the economic cycle.

The Federal Reserve is dovish right now, to counterbalance headwinds from the trade war. Ultra-low interest rates have been driving income-seeking investors who are ordinarily risk-averse to the equity markets, a dynamic that has especially lifted the real estate and utilities markets.

Historically, real estate benefits from a robust economic environment and utilities from the opposite. However, both sectors are thriving during this late-stage cycle.

The benchmark exchange-traded funds (ETFs) Real Estate Select Sector SPDR Fund (XLRE) and Utilities Select Sector SPDR Fund (XLU) have generated year-to-date returns of 27.5% and 18.5% respectively, compared to a return of 18% for the SPDR S&P 500 ETF (SPY), as of the market’s close on Wednesday. The outperformance of the utility sector is all the more remarkable, because it’s considered a safe haven.

Despite their run-up this year, both the real estate and utilities sectors have further room for growth. They also enjoy insulation from the global trade war.

Sectors that historically outperform during the late stage include energy, health care and consumer staples. Let’s take a closer look at energy and why it should appeal to bargain hunters.

Values in the energy patch…

The energy sector is undergoing upheaval, with crude oil prices volatile and on a downward trajectory. 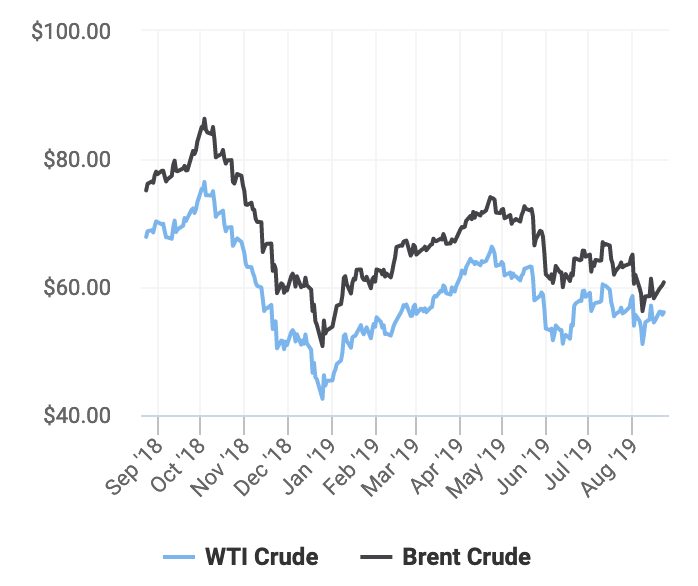 As you can see, crude oil over the past year has been on a roller coaster. Overproduction in places such as the Bakken and Permian shale formations in the southwestern U.S. has helped push down oil prices.

Due to falling oil prices, balance sheets in the U.S. energy industry are loaded with debt and margins are shrinking. It’s the familiar boom-bust cycle. But some companies are stronger than others.

The gyrating energy sector is home to value plays, as jittery investors abandon even quality equities. U.S.-based refiners stand out as compelling buys.

Refiners are often lumped in with chatter regarding energy prices. However, the products produced in refineries aren’t the same as the crude quoted in the market. Although the refining industry is affected by crude pricing, it’s more complicated than a simple rise or fall in the per-barrel price.

Because refiners must buy crude as feedstock, rising oil prices eat into profit margins. At the same time, refiners benefit from higher prices for their products.

Refiners make money on the spread between the cost of crude oil and the value of their refined products — aka, the “crack spread.” As the U.S. shale oil boom exploded, domestic crude oil production began to outstrip the capacity of refineries in some areas. Further, the light, sweet crude that is characteristic of shale oil isn’t a great match for refineries that have invested in heavy, sour processing.

The result has been discounted domestic crudes. Certain refiners can purchase these crudes, process them, and sell them into the export market at higher global market prices.

U.S. refiners are well-suited to leverage these economic realities. They all possess significant refining capacity in the mid-continent region of the U.S. They also have access to Gulf Coast export capacity. Make energy stocks, especially refiners, a key part of your sector rotation strategy.

Questions or comments about sector rotation? Send me an email: mailbag@investingdaily.com