Understanding and Adapting to Trade Wars

Regardless of where you stand on Donald Trump’s trade war with China (and other countries), I continue to see many misconceptions about what the U.S. is trying to achieve — and the tactics we are using to get there. Below, I will review global trade tensions and what they mean for your portfolio.

Why Conduct a Trade War?

Countries launch trade wars when they conclude that the playing field is unfair. In the case of the U.S. versus China, we have outsourced a lot of manufacturing industries and President Trump’s mission is to bring those industries back.

Simple enough, right? However, many people who sympathize with the goal simultaneously don’t understand the implications. For better or worse, the reason we trade with other countries is generally because they can provide certain products to us at lower prices.

There are many situations similar to that of steel, which is why a myriad of U.S. industries are vulnerable to tit-for-tat tariffs (see chart). 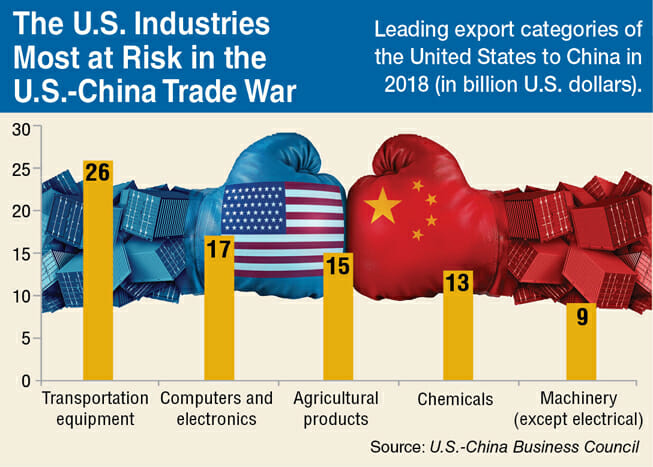 In fact, despite President Trump’s mantra that we must bring U.S. manufacturing home, he has succumbed to the same financial realities as everyone else in his businesses.

Many of the goods Trump has produced and used (e.g., the steel in some of his buildings) have been sourced from overseas despite the availability of the same goods (albeit more expensive), here in the U.S. Here’s a tag from the Donald J. Trump Signature Collection: 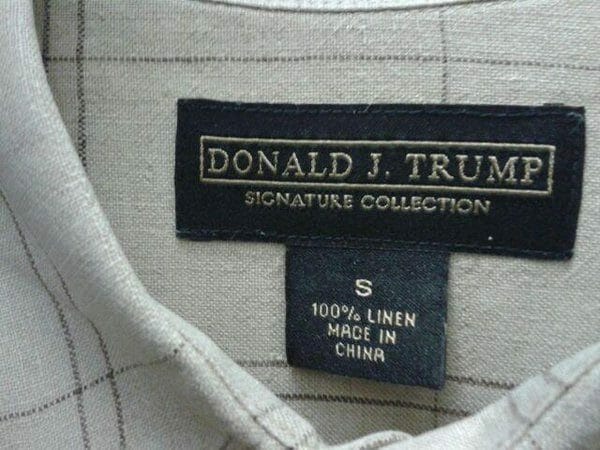 Meanwhile, Trump’s daughter Ivanka operates a line of branded clothing and shoes that are made by low-wage workers in China, Bangladesh, and other developing countries.

The point here is not to raise the matter of hypocrisy, but rather to highlight the powerful economic incentives to buy goods and services from China. They are cheap, which allows us to spend less money on goods.

Open and free trade has driven down the cost we pay for many of the products we buy, which ultimately allows us to have more discretionary income to buy other products.

What Is the Cost?

That’s the downside of trade wars.

What is the cost to consumers? JPMorgan Chase (NYSE: JPM) has estimated that the tariffs that have already been imposed will cost the average American household $600 per year. If President Trump carries out on his recent on again, off again Twitter threat to impose another $300 billion on tariffs on Chinese goods, that will rise to a cost of $1,000 per year. And in his latest Twitter proclamation, Trump has announced that he intends to go even further and raise the previously announced 10% tariff on $300 billion in goods to 15%.

These trade threat have tremendously rattled the financial markets and directly resulted in multiple steep sell-offs. Investors have been especially spooked by the inconsistent manner in which these tariffs have been announced, rescinded, and then increased. The markets do not like that kind of instability.

Further, the more these tariffs cost American consumers, the more pressure it puts on the economy. U.S farmers have been devastated by losing their exports to China, notably soybeans, as China has been unwilling to roll over on this issue.

The reality is that this is all dearly costing the U.S. economy, while holding out the promise that it will eventually revitalize U.S. manufacturing.

The Argument Against Trade Wars

I certainly agree that some U.S. industries are critical and strategic and we should never outsource them. We should also never become overly reliant on a single source for any of our goods.

On the other hand, for industries in which there are multiple countries that can all make goods cheaper than we can, it may be better to import those goods. We can focus on goods and services in which we have a competitive advantage. A country isn’t “stealing” from us if they sell us a cheaper good. They are providing us the good, and we are providing them money. (Theft of intellectual property is a different, although related issue.)

One could make an argument for protecting more industries if the U.S. unemployment rate was high. According to the Bureau of Labor Statistics, in 2009, the year President Obama took office — and in the wake of a serious recession — the monthly unemployment rate peaked at 10%. After that, the rate fell each year, reaching 4.7% in 2016, his last year in office.

The rate continued to trend down following Trump’s inauguration in 2017, but it was on a clear trajectory to historic lows. The U.S. workforce was already nearly fully employed, so it’s hard to argue that a trade war was needed on the basis of the economy.

But it is true that the nature of U.S. employment has changed over time. We just need to determine which manufacturing industries are critical to national security, and which aren’t. The current trade war seems unfocused, and much of it seems entirely unnecessary given the historic lows for U.S. employment.

How it Affects You

Whether or not you think this trade war is a good idea, it is likely impacting your portfolio. Further, it isn’t likely to be fully resolved soon. The best way to distance yourself from trade war-induced volatility is with investments that aren’t dependent on foreign goods for their businesses.

Some of those are the fixed income investments I have written about recently. Equities in this category include health care stocks and regulated utilities.

Regardless of how you adjust in anticipation of a protracted trade war, just remember that this issue is temporary. If you have a long-term game plan, just keep executing that plan.

To help you reach your long-term goals, I suggest you turn to my colleague Amber Hestla.

As chief investment strategist of Income Trader, Amber specializes in trades that succeed regardless of trade policy, economic cycles, or market ups and downs.

Amber is a financial expert but she’s also a military veteran. Amber served with distinction in Operation Iraqi Freedom. While deployed overseas with military intelligence, she learned how to interpret disparate data to predict likely outcomes. Upon her return to civilian life, Amber honed this skill to find money-making opportunities.

If you can answer yes to three simple questions from Amber, you could start collecting $565.00 (or more) every week for the rest of your life. Want to get started? Click here to see if you qualify.