Tilt The Odds in Your Favor

If you sometimes get the feeling that the stock market is a rigged casino, you’re not alone. The Wall Street “big boys” have always had an advantage over average retail investors, but the game seems more unfair than ever.

Consider the market’s extreme volatility lately. With financial markets moving up or down according to government declarations on Twitter, watchdogs in the media are suggesting that a handful of insiders with advance knowledge of market-moving tweets are making a killing.

Government officials are expressing outrage at these accusations of market manipulation. But why should insider trading surprise anyone?

I’m reminded of the classic 1942 film Casablanca, in which Captain Renault says he is “shocked, shocked!” to learn that there’s gambling at Rick’s Café. The Vichy gendarme Renault (played with sly irony by Claude Rains) is actually a habitual gambler at the café. His accusation of gambling is a pretext to shut the place down.

So as I watch the market suddenly soar or plunge on the basis of a tweet or press release, I would not be shocked, shocked! to learn that a few well-placed individuals on Wall Street and in Washington are illegally reaping fast profits by exploiting inside information. Below, I’ll convey time-prove strategies to cope with this uncertainty and tilt the odds in your favor.

The very real risk of recession…

President Trump certainly sees conspiracies, but of a different sort and directed at him. His latest accusation is that the press is trying to sabotage the economy, and by extension his re-election prospects, with alarmist talk of a recession.

From the G7 summit in France on Sunday, the president fired off a series of angry tweets that accused the “fake and disgusting” news media of trying to talk down the economy.

But the latest numbers aren’t fake. They indicate real trouble ahead. 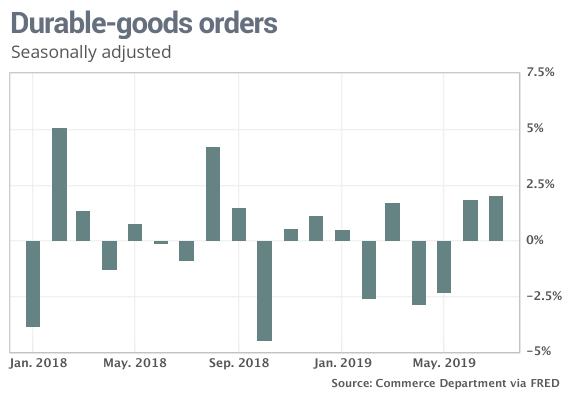 However, shipments of new orders declined by the most in nearly three years, underscoring continued weakness in business investment and a sputtering economy in the third quarter. IHS Markit last week reported that manufacturing activity in the U.S. contracted in August for the first time in nearly a decade.

The risk of recession is exacerbated by the U.S.-China trade war.

Trade tensions escalated last weekend during the G7 summit. The meeting of world leaders was fraught with discord as the U.S. and China launched tit-for-tat trade sanctions. Beijing slapped tariffs on $75 billion worth of U.S. goods; hours later Trump announced a new round of tariffs on Chinese imports.

But on Wall Street, sometimes bad news is received as good news. Investors assume that signs of economic slowdown combined with trade tensions will provide more justification for the Federal Reserve to cut interest rates again next month.

At the annual Jackson Hole, Wyoming symposium of bankers and academics last week, Federal Reserve Chair Jerome Powell blamed trade policy for “a role in the global slowdown and in weak manufacturing and capital spending in the United States.”

Powell acknowledged that the economy is in a “favorable place,” but he made it clear that the U.S central bank would remain flexible and “act as appropriate” to shore up the economic expansion. Powell’s words weren’t dovish enough for Trump, who went so far as to call his own hand-picked Fed chair the “enemy,” but Powell’s accommodating words suggest that another rate cut is possible next month.

Last month, the Fed lowered its short-term interest rate by 25 basis points for the first time since 2008, to offset the trade war and slowing global growth. Wall Street expects a similar cut at the Fed’s next policy meeting Sept. 17-18.

Stocks also got a boost yesterday from Trump’s prediction that a trade deal with China would soon be reached. Beijing made some conciliatory noises as well. The leaders of the U.S. and China seem determined to prevent a repeat of Friday’s trade-induced stock market plunge.

But haven’t we been down this road before? Stocks have been highly volatile for several months, driven sharply up or down by impulsive tweets or off-the-cuff statements from government officials. I don’t know about you, but the economic textbooks that I read in college never accounted for the “Twitter effect.”

These shenanigans shouldn’t prevent you from making money. Despite the market distortions created by social media and trade battles, some things never change. You can better cope with periods of great uncertainty by relying on historically proven strategies — and now’s an opportune time for sector rotation.

As the late-stage economic expansion shows signs of turning toward contraction, you should rotate toward defensive sectors such as energy, health care, consumer staples, utilities, and financials (see chart). 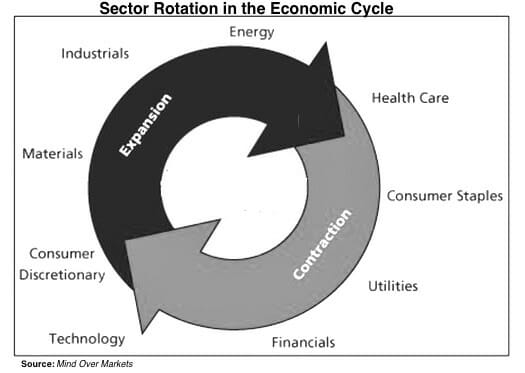 I explain in greater detail the appropriate sector rotation moves in my August 22 article: Late-Cycle Investing (Before It’s Too Late).

Many money managers and financial opinion leaders are calling for a stock market correction sometime this year. By definition, a correction occurs when the market falls 10% from its 52-week high.

For the last four decades, every bull market has experienced a correction, which is simply a healthy restoration of equilibrium. With stock valuations now at excessive levels, you should welcome a correction. It’s hard to find value nowadays; a correction would put many appealing but overpriced stocks back on the bargain shelf.

While you’re bracing for the likely correction, there’s one important proactive move you can make now to protect your portfolio: Trim your growth stock allocation, in favor of income investments. Dividend-paying utility stocks are particularly appealing now.

The crashes of 1929, 1981, 1987 and the more recent tumbles of 2007-2009 are all examples of situations when investing in only growth stocks with the highest potential return was not the wisest course of action.

Pocket some of your gains from your growth stock winners and rotate toward value plays in defensive sectors. Elevate cash levels, so you can scoop up the bargains to come. Stay invested, but don’t roll the dice.