How to Profit When Trump and Xi Shake Hands

During times of family trouble, my sainted Greek grandmother would calmly say: “This too shall pass.” She died many years ago, but Yia Yia’s village wisdom still resonates with me.

Fast forward to current market woes. This trade war, too, shall pass. Not tomorrow or next week, but…eventually. And when it does, investors are likely to rush into those sectors that have gotten clobbered the worst by tariffs. I examine these opportunities, below.

Stocks this week have witnessed choppy trading, driven by the ebb and flow of perceived progress on trade negotiations.

Stocks opened Wednesday morning deeply in the red, with the Dow down by more than 100 points, but the indices gained traction in volatile trading as the day wore on. By late afternoon, the Dow was up by more than 200 points, but wild intraday swings are usually the sign of an unhealthy market.

It’s clear that the trade war is fueling recession fears. Weighing on stocks yesterday and today was the reemergence of the “yield-curve inversion.” The spread between the 10-year Treasury yield and the 2-year fell to negative 6 basis points on Wednesday, extending its decline from the previous session. Historically, an inverted yield has been the harbinger of a recession. It now hovers at its lowest level since 2007.

President Trump claims that any talk of recession is “fake” news designed to make him look bad ahead of the 2020 election. But the worrisome numbers aren’t a figment of the media’s imagination.

The manufacturing Purchasing Managers’ Indices (PMI) for the major industrialized nations that make up the G7 reflect widespread contraction over the past 18 months, largely because of the natural progression of the economic cycle as well as headwinds from the global trade war. Tariffs are generating uncertainty, higher input costs and supply chain disruptions.

Take a look at the chart below, courtesy of the research group FactSet. An index reading above 50 indicates an expansion in overall activity while a reading below 50 indicates contraction. 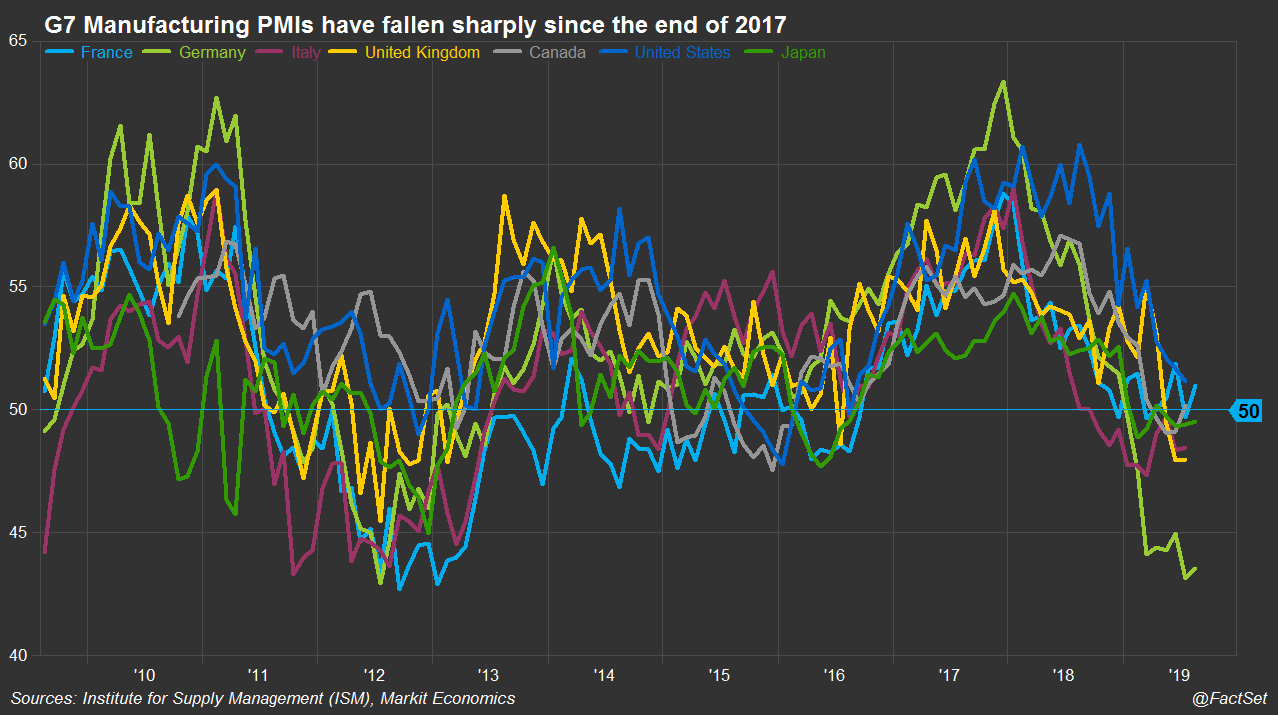 Germany is showing the worst decline in manufacturing activity, with the country’s PMI having fallen from 63.3 in December 2017 to 43.6 in August 2019. Export-dependent Germany is the growth engine of Europe.

The escalating global trade war is the main culprit for Germany’s slowdown. The country heavily relies on automobile manufacturing, a sector that has taken a hit because of the trade war. Exports only account for 12% of U.S. gross domestic product but nearly 50% of Germany’s.

Another threat to Germany and the rest of the Continent is Britain’s plans to leave the European Union, aka “Brexit.” Negotiations between the pugnacious Tory Prime Minister Boris Johnson (often called “the British Trump”) and his EU counterparts have been rocky. The deadline for a deal is October 31 and the likelihood of a no-deal, or hard, Brexit is growing as Britain descends into political mudwrestling.

Johnson announced plans Wednesday to effectively suspend Parliament, to limit debate on his Brexit proposals. Johnson vows to leave the EU, with or without a deal. Outraged Labor party officials immediately accused Johnson of “aiming for a coup against Parliament.” Economists say that a hard Brexit could plunge the country’s economy into a recession, with aftershocks in the EU.

Collectively, the EU is the world’s second-largest economy, in nominal terms, after the United States. Britain is the fifth largest. In addition to tariff relief, the EU allows free movement among its 28 member countries for employment and commerce. Although it gets little coverage in the U.S. media, Brexit is another serious headwind facing the global economy.

Among all the worries about Brexit, probably the most pressing is whether the EU’s big banks now face serious trouble that will spill into the global economy. Deeply indebted and economically troubled countries such as Italy could be the first dominoes to fall, with European banks unable to act as backstops.

Italy is the world’s third-largest economy and its government collapsed earlier this month. The country’s political leaders are meeting today to try and form a new governing coalition; talks so far have been contentious. Nationalists in Italy are even threatening to push for a departure from the EU.

Britain and Italy are in chaos and the the EU is under existential threat, amid the backdrop of a looming global recession. Small wonder that investors are nervous.

America’s corporate leaders are nervous, too. According to TrimTabs Investment Research, corporate insider selling has exceeded $10 billion so far in August, the fifth month this occurred in 2019. The last time insider selling topped that level was in 2007. We all know what happened in 2008.

The fight for the future…

The stocks in these industries have served as bellwethers of progress, or lack thereof, in trade talks.

Investors are transitioning away from momentum growth stocks toward safer sectors more appropriate for the late stage of a recovery, such as utilities, real estate, consumer staples, and health services. These stocks are better equipped to weather the storm if the economy sputters because of trade conflict with China.

But the underperformers would be among the first to shoot higher if a grand trade deal is forged between the world’s two largest economies.

Technology, industrials, telecommunications, consumer discretionary — these sectors have gotten punished the most. If you think a deal is forthcoming, that’s where you should do your hunting.

Risk-averse investors should consider exchange-traded funds (ETFs) for these tactical pivots. Rather than try to pinpoint individual companies in industries you think will pop when tariffs end, ETFs are a potent means to that end.

The goal of a tactical asset allocation strategy is to seize on fast-moving trends or to take advantage of any short-term view of the markets.

Agricultural goods will be another big winner when this trade war ends. A resolution of trade conflict would mean that China has further opened its doors to American farmers, who are suffering right now because of sanctions.

The trade war has been grinding on since January 2018, when Trump first launched his protectionist tariff policy. I’ve been warning readers that trade tensions could continue into the 2020 election. But pressure is mounting on both sides to strike a deal, so maybe the world will get a lucky break. Trump and Chinese President Xi Jinping may finally decide that enough is enough.

We’ve endured many false hopes (and head fakes) in this trade slugfest. But if it appears that a genuine truce is at hand, you can make early bets on the likely beneficiaries. Everyone loses in a trade war, but you can win the peace.