A year ago, the quintet of tech stocks known collectively as “FAANG” was all the rage. Collectively, those five companies — Facebook (NSDQ: FB), Amazon.com (NSDQ: AMZN), Apple (NSDQ: AAPL), Netflix (NSDQ: NFLX), and Google parent Alphabet (NSDQ: GOOGL) — had doubled in value over the prior three years.

If you didn’t know what to do with your money, just buy the FAANG stocks and let the market take care of the rest. Or so the thinking went at the time.

What a difference a year makes.

Of the five FAANG stocks, only one of them has posted a gain since September 3 of 2018. And that one is Facebook at +3%. However, FB had dived earlier in the year as a result of the Cambridge Analytica scandal, so the magnitude of its gain is misleading.

The other four are still in negative territory for the past year. Amazon is down 9%, Apple has lost 5%, Netflix is off 21%, and Alphabet is 6% lower.

Without the FAANG stocks to lead the market higher, it has lost direction. The S&P 500 Index has gained no ground over the past five months.

Even worse, despite the 17% jump in the S&P 500 over the first half of this year, the index ended August almost exactly where it was a year ago.

It was long believed that low interest rates were the fuel driving momentum stocks higher. And for a while, that was true.

But the protracted trade war with China has cast a pall over high-multiple growth stocks that depend on exports for much of their revenue.

Momentum stocks aren’t dead, but they have taken on new life in businesses that are less vulnerable to trade wars.

One tech stock that has outpaced the FAANG quintet is Microsoft (NSDQ: MSFT), up 25% over the past 12 months. Microsoft’s strategic shift towards cloud computing a few years ago is now paying off.

Microsoft stock has tripled in price over the past four years. Yet, it is valued at only 23 times forward earnings. That’s a bit more than the 18 multiple for the S&P 500, but less than half Amazon’s multiple of 53.

However, Microsoft has become the exception rather than the rule that all momentum stocks must be in the tech sector. As money has flowed out of FAANG, it has found a new home in companies across a wide variety of sectors.

Similar to Microsoft, The Coca-Cola Company (NYSE: KO) has also gained 25% during the past year and is valued at 24 times forward earnings. Not bad for a company that sells flavored water.

It would be difficult to find a less exciting business than Cintas (NSDQ: CTAS). The company makes “corporate identify uniforms” and provides restroom cleaning services. What’s exciting, though, is the stock’s 24% gain during the past year and four-fold increase over the past five years.

Point being, tech is no longer where all the action is. In fact, a list of the top 20 performing stocks in the S&P 500 for the first seven months of 2019 reveals that only seven of them were in the tech sector. 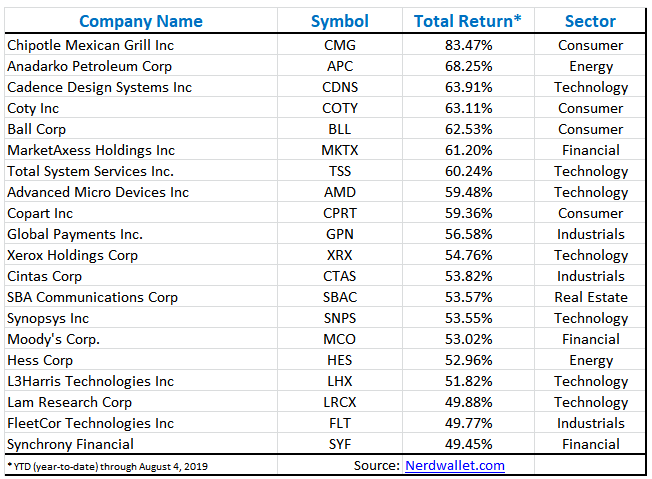 Of the remaining 13, four were consumer stocks. There were three each from the Industrial and Financial sectors, two energy stocks, and one real estate company.

As for the FAANG stocks, only one of them appears fairly valued to me. That one is Apple, maker of the iconic iPhone.

Apple’s stock is currently priced at only 16 times forward earnings and it’s paying a forward annual dividend yield of 1.5%.

In short, AAPL will pay you as much current income as the 10-year Treasury note and will most likely prove to be a much better hedge against inflation. If interest rates move higher in the years to come, bond prices will most certainly fall.

What also is likely to occur over the next 10 years is a resolution to the U.S.-China trade war. When that happens, interest rates will most likely rise as will Apple’s share price.

Since bottoming out at $142 the first week of this year, AAPL surged 50% to close above $212 two weeks ago. That’s the good news. The bad news is AAPL is still lower than it was a year ago when it traded above $229.

If AAPL makes it back to $229 this year, that would represent a roughly 10% gain from where it ended last week. That’s not bad, but last month my colleague Jim Fink made 100% on an Apple trade…in just four days!

How did he do it?

Want to learn about Jim’s money-making secrets? Click here for a presentation.