Investor Warning: Bears On the Prowl

The perpetual doomsters can be a tiresome bunch. These “Chicken Littles” warn of imminent catastrophe, regardless of underlying fundamentals. The real agenda of these advisers is to play on your fears, to separate you from your money.

You’ve seen their advertising pitches: Sell stocks, sell the house, sell everything but the kids! Another Great Depression is on the way!

If you had listened to these hucksters over the last few years, you would have missed the greatest bull market in history.

Ahh, but here’s the catch: The bears aren’t always wrong. Bearish sentiment is rising, with ample justification. Conditions are now ripe for a market meltdown.

Many well-respected analysts are calling for an imminent correction that will usher in a prolonged down market, a gloomy assessment that looks more credible with each passing day. Indeed, some are calling for a full-blown financial crisis in the second half of 2019 that resembles 2008.

A doomster doubles down…

In an August 26 note, Takada doubled down on his earlier warning and said the collapse could happen in a matter of days.

“The correlation between sentiment then and now remains quite high,” Takada wrote, referring to the collapse of Lehman Brothers in 2008. “Even the passing risk-on phase after the initial shock of the yield curve inversion (this month)… and the risk-off mood that struck on 23 August neatly track the pattern recorded in 2008.”

The Dow Jones Industrial Average plunged more than 33% in 2008, the year in which Lehman’s collapse triggered the financial contagion of 2008-2009. 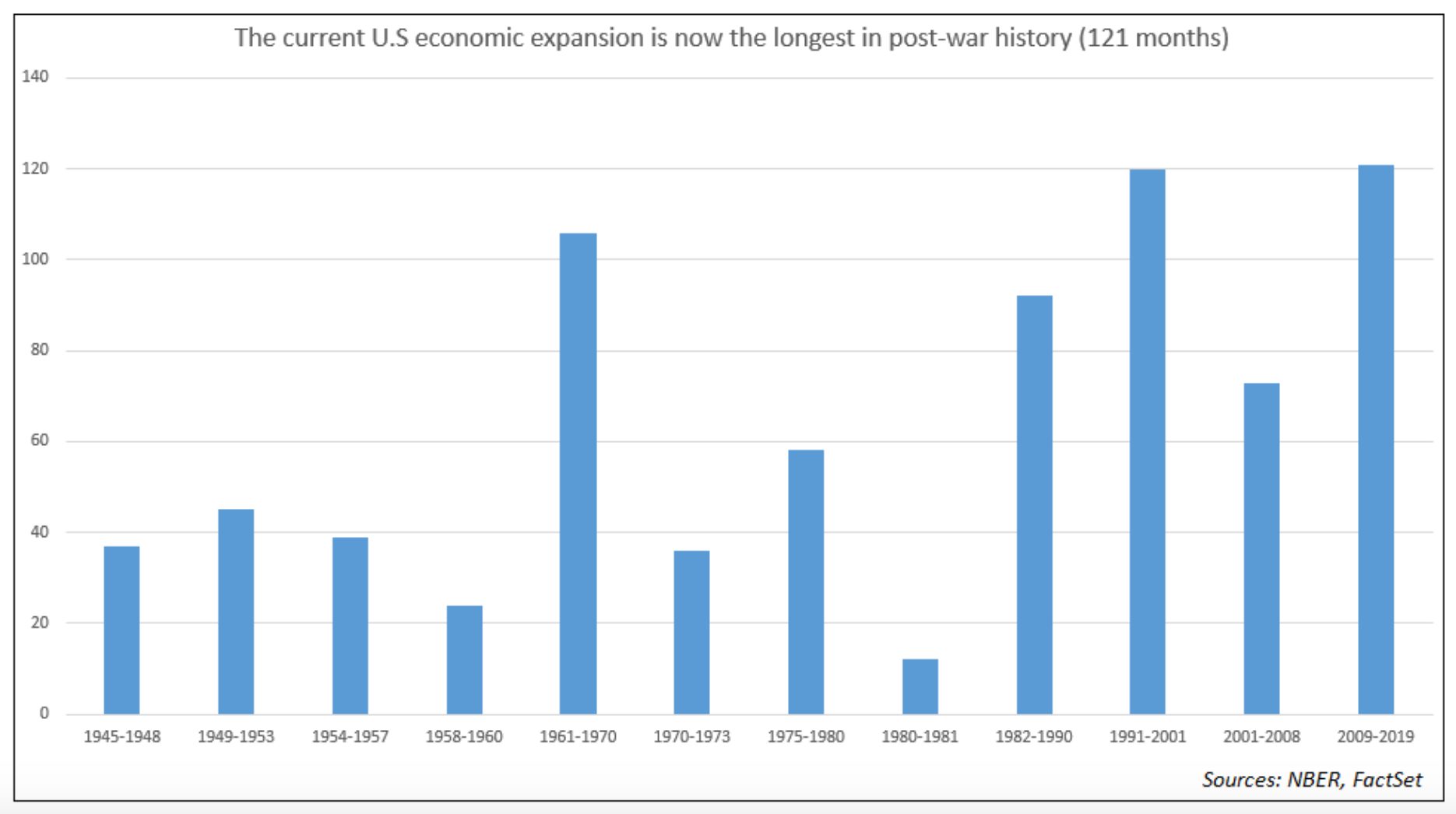 Economists like to point out that “expansions don’t die of old age.” That’s true. But the older an expansion gets, the more vulnerable it becomes. The current expansion is on wobbly legs and it wouldn’t take much to knock it down.

Takada based his pessimism on the ruinous effects of the trade war, slowing global economic growth, and data suggesting that hedge funds are avoiding broad bets on the bull run and shifting to more neutral strategies.

Takada warned that the danger is elevated around the Labor Day holiday, when trading volume is typically light, which could in turn exaggerate downward moves. He also asserted that additional risk stems from the prevalence of index and exchange-traded funds (ETFs).

Moody’s Investors Service predicts that the number of passive index funds will overtake actively managed funds in the U.S. by 2021. ETFs that track financial indices have become a major factor for recent volatility. Because they’re managed via software algorithms, these funds act as accelerants, up or down. They could make the next crash worse.

Also troubling is the yield curve inversion, which occurs when short-term interest rates are higher than long-term interest rates. Falling U.S. Treasury yields in recent months indicate an increasing lack of confidence in the economy (see chart from FactSet): 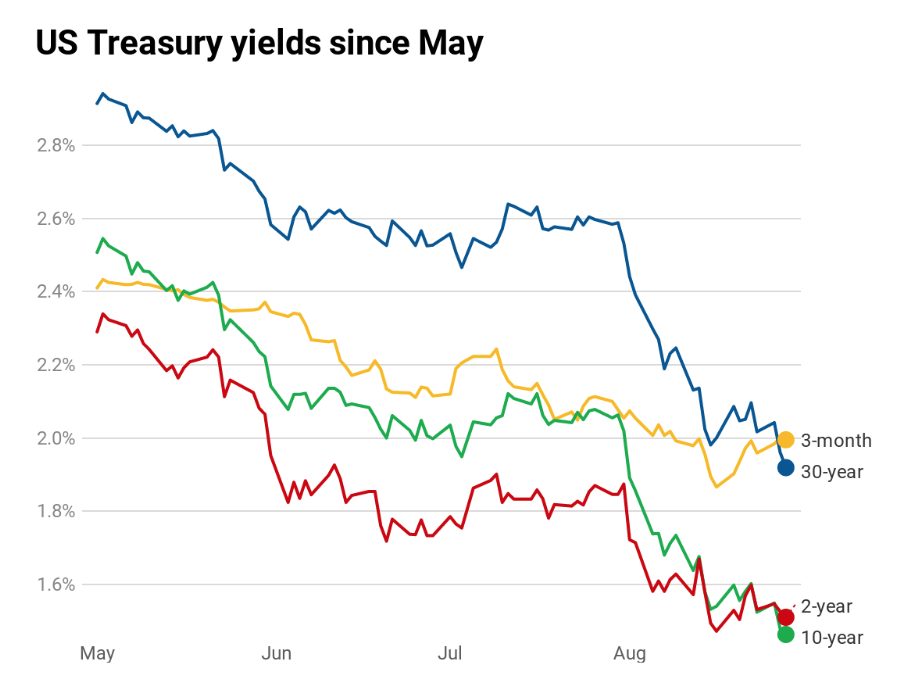 The inverted yield curve has been a reliable red flag that a recession will occur in the following 12-18 months. This indicator currently hovers at its worst level since 2007, which further bolsters the bear case.

It’s cold comfort, but keep in mind, there’s usually a lag time of at least several months between the emergence of an inverted yield curve and an actual recession.

However, the economic expansion remains under threat from the tit-for-tat tariff battle.

The Trump administration is scheduled to impose the first phase of U.S. tariffs on $300 billion worth of Chinese goods on September 1. China was poised to retaliate with tariffs on U.S. products on the same day, but Beijing indicated on Thursday that it would refrain for now.

China’s surprisingly conciliatory stance cheered investors today, but the manic-depressive mood of the stock market should make you wary. Healthy markets take the stairs, not the elevator.

Don’t run for the hills…

Against this dire backdrop, I wouldn’t blame you for being nervous. But I would blame you for fleeing the stock market altogether. Fact is, you’d miss out on the huge profits still to be made, even under these risky conditions.

In previous Mind Over Markets columns, I’ve shown you the protective actions to take now. These steps shield your wealth but also convey plenty of opportunities for profit. Crash-proofing your portfolio doesn’t preclude you from making money.

One defensive tactic: For new stock purchases, use a “stop-loss” order with your broker. Using this order, the trader will pre-set the value based on the maximum loss the investor is willing to tolerate.

If the price drops below this fixed value, the stop loss automatically becomes a market order and gets triggered. As soon as the price falls below the stop level, the position is closed at the current market price, which prevents any additional losses.

Portfolio allocations that make sense now: 50% stocks, 25% hedges (such as gold and other precious metals), 15% cash, and 10% bonds. The price of gold has enjoyed a nice run this year and it should continue rising.

The bears are coming out of hibernation. Don’t run for the hills, but use extreme caution.

Questions about rising bearishness on Wall Street? Feel free to drop me a line: mailbag@investingdaily.com