Americans tend to be a parochial people. In his farewell address of 1796, President George Washington warned “against the insidious wiles of foreign influence” (he never used the words “foreign entanglements,” as widely believed).

The average citizen of “Fortress America” doesn’t give much thought to other countries, unless these foreigners are caricatured as job-stealing villains — e.g., China and Mexico.

Network producers in this country know that foreign news is bad for ratings, so they give it short shrift on newscasts. The moment a news anchor says something like “In Europe today,” millions of Americans will change the channel.

So it’s not surprising that the U.S. financial press consistently underrates the risks posed to investors of Britain’s exit from the European Union, a move known as Brexit. However, the aging bull market is vulnerable to external shocks, especially those that seem to come from nowhere.

Below, I’ll explain why Brexit matters to your portfolio and the appropriate moves you should take now.

In a note to clients on Thursday, economists at JPMorgan Chase (NYSE: JPM) warned there’s now a 35% chance that Britain will crash out of the EU on the deadline of October 31 without an agreement — a “hard” Brexit. The investment bank based its view on British Prime Minister Boris Johnson’s controversial move this week to suspend Parliament.

A deal that’s mutually agreeable to UK and EU negotiators, aka “soft” Brexit, would still cause economic disruption, but less so. As the following chart shows, a hard Brexit would slam growth throughout the British and European economies: 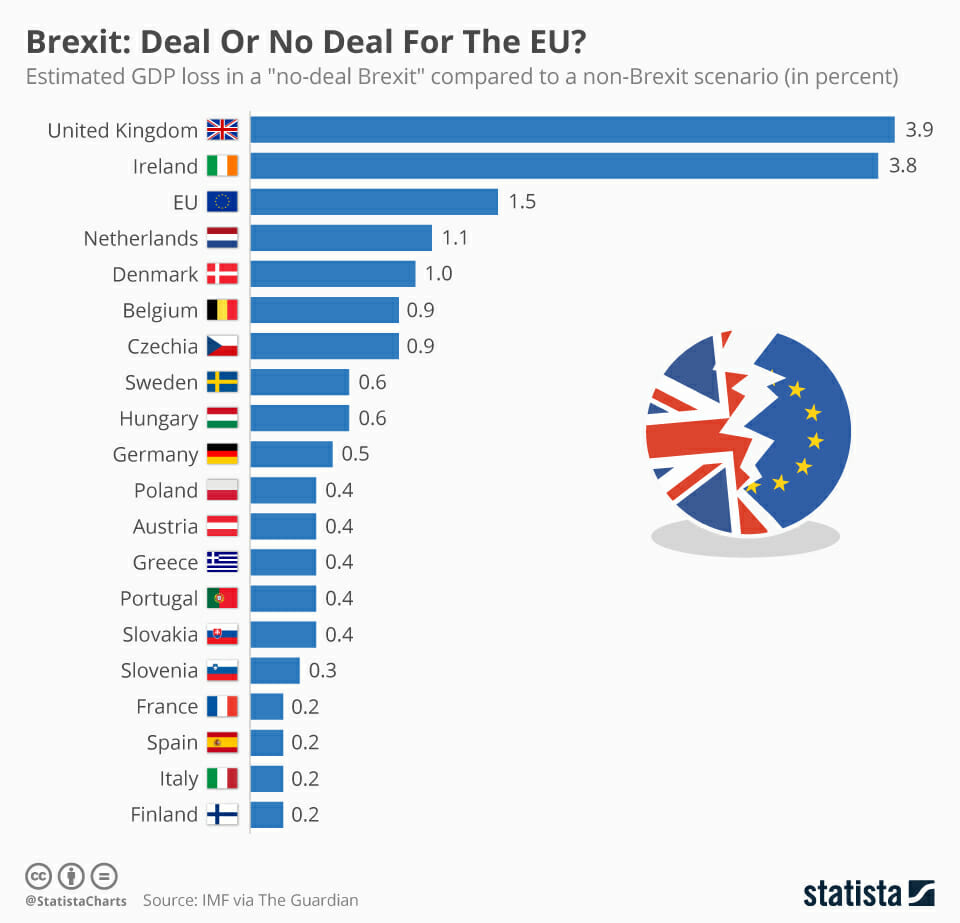 Tory leader Johnson is fiercely pro-Brexit and he has stated his willingness to leave the EU without a deal. His suspension of Parliament limits debate ahead of the EU deadline, a tactical move to ram through his Brexit proposals. But it also increases the likelihood that nothing gets approved by British lawmakers, which means the UK would have no exit plan to present to the EU.

Johnson is being condemned by the opposition Labor party, and even some members of his own Conservative party, for having launched a “coup” against British democracy.

Why should you care? Okay, here’s a snap quiz. Name the world’s second-largest economy.

In fairness, I posed a trick question. The EU is collectively the world’s second-largest economy, in nominal terms, after the United States.

In addition to tariff relief, the EU allows free movement among its 28 member countries for employment and commerce. Many economists predict that a hard Brexit would be a disaster for Britain and the EU, and by extension would harm growth in America and the rest of the world.

Shortages of vital medicines and foods, supply chain disruptions, higher input and retail costs, transportation bottlenecks, lower consumer demand, gutted health and safety rules, managerial confusion, lost jobs…the results in the UK and on the Continent of a hard Brexit would be ruinous and long lasting.

The June 2016 referendum for Britain to leave the EU, combined with London’s fumbling response, represents a collective suicide pact. Why did Brits vote for Brexit? It boils down to one word: immigration.

The Brexit vote was swayed by the British public’s growing resentment of immigrants that are allowed into the country via EU rules. Ahead of the vote, this brewing anger was fueled by Russian mischief on social media, Cambridge Analytica’s targeting tactics, Rupert Murdoch’s anti-immigrant tabloids, and deliberate falsehoods spread by pro-Brexit politicians.

Sure, Britain needs immigration reform. But instead, it’s getting economic chaos. And Russian President Vladimir Putin is getting his wish for a destabilized West.

Britain is the world’s fifth largest economy and our closest ally. Hard or even soft Brexit could trigger a chain reaction in Europe, with collateral damage reaching across the pond to Britain’s cousins in America.

In addition to consumer staples, utilities make sense as well. These defensive sectors are buffers against geopolitical risks such as Brexit; they’re also timely plays in this late stage of the economic cycle.

One caveat: consumer staples and utilities have been on a tear so far this year, which makes them a bit pricey. As investors chase yield, they’ve pushed up valuations in the two groups.

According to research firm FactSet, utilities and consumer staples now sport forward price-to-earnings (FPE) ratios of 19.3 and 19.6, respectively, compared to their historical averages of 14.8 and 16.9. However, these FPEs aren’t too out of whack and the two sectors still have room to run.

At the same time, limit your exposure to financial services companies either based in Europe or with major operations there.

The metrics for European banking hardly look promising, a problem that will be exacerbated by Brexit. Fears are mounting that Brexit could pave the way for another 2008-style crash.

Back then, during the financial crisis, governments around the world doled out massive sums to bail out their national banks. Brexit could indicate whether, yet again, Europe’s banks are too big to fail.

Britain also happens to be home to a large aerospace/defense sector. These makers of high-tech aircraft and weapons systems are poised to lose a lot of clients because of Brexit. Picking up this lost market share will be their U.S.-based competitors. Brexit is a tailwind for American defense companies.

It was once said that the sun never sets on the British empire, but at present the United Kingdom is anything but united. We could be witnessing the sunset of British influence and prosperity. As a pragmatic investor, you can make Britain’s loss your gain.

“China recently signed a deal with Russia to buy soybeans. Tell me how American farmers are going to recover.” — Jim G.

It’s not just corporations that are hurting from the trade war. China has responded to tariffs by shifting its acquisition of key agricultural commodities, notably soybeans, from America to alternate sources such as Russia.

Yep, so far, there’s only one winner from this trade war, and it’s Russia.

The big loser? It’s not China. It’s the U.S. Farm Belt, which is part of President Trump’s political base. Farm loan delinquencies and bankruptcies in the U.S. are at six-year highs.

China is the world’s biggest soybean importer, but it’s now subsidizing a big increase in the country’s domestic production of soybeans, in addition to buying this vital foodstuff from countries such as Russia. That leaves farmers in the American heartland out of luck.