I hope you enjoyed a peaceful Labor Day weekend. My holiday was purposely low-key, but on this first trading day of the month, the tranquility is over.

The three main U.S. stock market indices opened today in sharply negative territory, amid the latest escalation of the U.S.-China trade war. As of this writing on late Tuesday morning, the Dow Jones Industrial Average was down by more than 300 points. Crude oil prices were down by more than 2%.

September could be even worse. The U.S. on Sunday implemented 15% tariffs on $125 billion worth of Chinese goods; China retaliated with new duties targeting $75 billion of U.S. goods.

China on Monday filed a complaint against the U.S. with the World Trade Organization (WTO), arguing that the latest batch of tariffs from the Trump administration violated a consensus reached by Beijing and Washington in June at the G20 summit in Japan. China’s petition to the WTO sends a clear message: the country has no intention of backing down.

The long-running trade war is one of the most frequently expressed concerns of my readers. Let’s step back from the gyrating markets and take a look at your latest letters, with my responses. During volatile times like these, it helps to see what’s on the minds of individual investors like you.

The truth about tariffs…

Concerning my continuing coverage of the trade war:

“It’s really gratifying to see an investment newsletter adviser take Trump to task for something. They all either praise him or refrain from criticizing him. If Obama were doing these things, they would eviscerate him. It’s hard to have confidence in advisers who boast about keeping emotion out of investing, but show a definite political and ideological bias.” — Robert B.

History shows that tariffs damage the economy and markets, whether those tariffs are imposed by a Democratic or Republican administration. The overwhelming consensus of economists, on both the left and right of the political spectrum, is that tariffs are a terrible idea. Wall Street understands this, hence today’s stock market swoon.

“The correction that occurred on 24 December indiscriminately hit all sectors, including consumer staples and utilities. A recession would seem to be similar. In the 2008 recession the DJ Industrials dropped about 56%; the DJ Utilities were much better, dropping about 37% (in a dropping interest rate environment). Price recovery from the 2008 recession took about 6 years.

As a consequence, a future recession raises my concerns about a suitable defensive plan. In a retirement account it seems that stocks may not even be suitable, and there should be sufficient cash available to meet the requirements for the next 6 to 10 years.”— L.S.

A recession could be 12-18 months away. However, economic reports over the summer have reflected an economy that’s slowing.

Keep an eye on important data scheduled for release this week that will provide further clues as to the condition of the economy (see table). 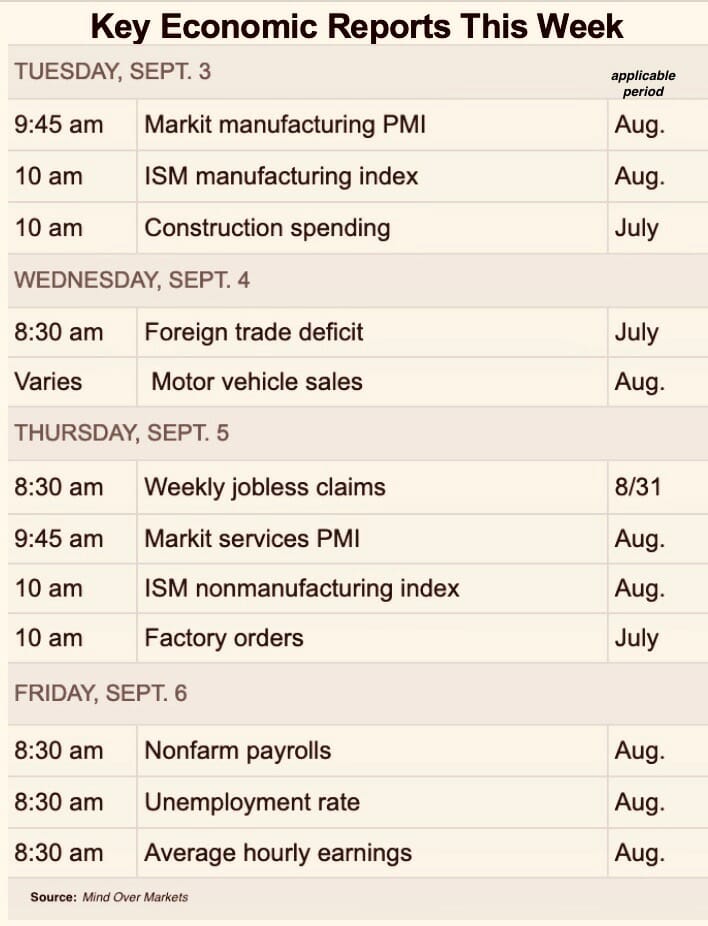 Under today’s investment conditions, here are the asset allocations that strike the right balance: 50% stocks, 25% hedges, 15% cash, and 10% bonds. Calibrate these percentages according to your stage in life. The older you are, the higher you should elevate cash levels and reduce growth stock holdings.

“I am a little confused about this stock market downturn. At present the economy here is good, the unemployment rate is very good, and consumer spending is at an all-time high.”— Ehtesham H.

The stock market is not the economy, although many people erroneously equate the two.

A crucial difference between the S&P 500 and U.S. gross domestic product is that most of the earnings in the S&P 500 stem from the manufacturing, energy, and goods-producing sectors. However, those sectors make up only 14% of total employment in the U.S. economy.

The stock market boils down to one thing: a daily wager on the future profitability of corporations. In this sense, the market and economy are linked, because corporate earnings tend to rise during economic expansions and decline during downturns. But the daily ups and downs of the stock market neither drive, nor necessarily represent, trends in the economy as a whole.

A dose of reality…

“I read your Mind over Markets email all the time. I enjoy it very much. Thank you. In your 8/27/2019 letter, Tilt The Odds in Your Favor, you consistently used the term ‘government officials’. It was my thought that you were trying to not anger those who favor the individual you clearly were referencing.

I wish you’d use his name. Folks who are angered by the truth need to be confronted by it repeatedly, and often. Only then will they clear the fog from their glasses and realize what’s really going on. A dose of this sort of reality — to view the world as it is, and not as they’d like it to be — is sorely needed. As I am certain you know, it is much more difficult for individual investors to make money in the unstable markets this government official has created.” — Bruce B.

Bruce, you’re correct in asserting that none of us should ignore how misguided public policy can hurt investors. That said, economic mismanagement is endemic to Washington and not the result of solely one party…or even one politician (e.g., Donald Trump).

In response to my August 30 column, A Very British Coup: Brexit’s Threat to Investors:

“Over the last 40 years, there has been, by stealth, a number of developments that morphed the European Union into the United States of Europe. Bit by bit, our own politicians were aiding and abetting a foreign power in dismantling our borders, changing our laws to allow anyone and all numbers of people, and granting unlimited access to our already overstretched services.

We noticed first, the odd number of illegals, walking the roads of the UK. Then we started to get encampments. The government was then forced, as a way of dealing with the issue, into giving homes to illegals (not returning them to where they came from) over the existing lists of British people who had been waiting for years for such homes. Our hospitals were the next to be over-run.

We are fighting for our lives and our way of life, just like any self-respecting American would do if faced with the same set of circumstances.” — Kevin G.

“You’re completely wrong re your reason for Brexit. The vote to leave had nothing to do with immigration. The main reason to leave was to regain full control of our country.” — Michael G.

“Your article on Brexit was balanced and as accurate as any I have seen. Living in the UK, I did vote for Brexit and am happy if it’s no deal. Main reason was not immigration issues but the fact that we as a sovereign state were being constantly undermined by a bunch of unelected money wasters in Brussels. Good article.” — Andy R.

Many pollsters and academics argue that detestation of immigrants was the major driver behind the “Leave” campaign. But more to the point, Brexit now threatens global economic growth and investors need to position their portfolios accordingly. It’s telling that several billion British pounds have been pulled out of UK equity funds since pro-Brexit Boris Johnson became Prime Minister.

Comments or questions? I (minimally) edit letters for the sake of clarity, concision and civility. Send your emails to: mailbag@investingdaily.com. Let’s keep the dialogue going.