3 Countries That Win From Trade War

Since President Trump fired the opening salvo with new tariffs in January 2018, the trade dispute between the U.S. and China has escalated into a trade war. The two sides are slapping more and more tariffs on each other. After many twists and turns, there’s still no resolution in sight.

The uncertainty and the threat of trade tensions getting even worse have certainly impacted markets lately.

Since September 2015, the S&P 500 has fallen 2.5% or worse in a single day 14 times. Eleven of those declines have occurred since the initial January 2018 tariff announcement, including three in the last six weeks. Often the fall has occurred because of deterioration in trade talks.

As an investor, should you sell everything and head for the hills?

As scary as the stock market can be sometimes, it’s important to remember that over time, the market goes up.

It’s very hard to consistently time the market correctly. It’s also hard to not let your emotions get the better of you. But experienced investors will tell you, over time it’s better to invest in quality and stay the course.

Dumping Stocks: Not the Best Strategy

Even during the Financial Crisis of 2008-2009, investors who hung tough made back their money and more. Those who got out of the market when the clouds looked the darkest and did not get back in until the market had recovered were the ones who lost the most money.

As the chances of a quick trade deal have fallen, safe havens that some investors have moved money into include utilities, consumer staples, and gold. The chart shows how those three havens have fared compared to the S&P 500 over the past year. 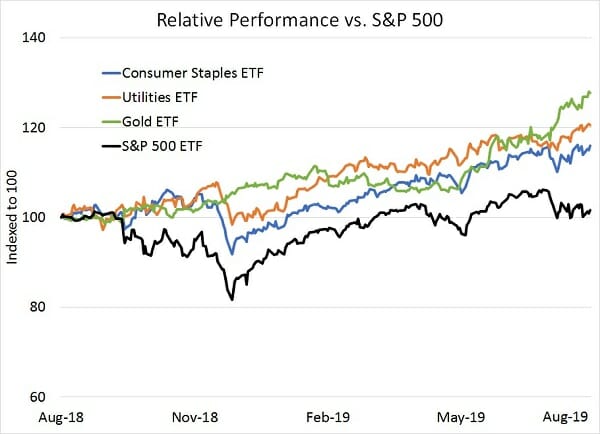 The demand for traditional safe-haven investments rise when fears grow because they are less sensitive to economic downturns. However, for bolder investors who see the trade war as an opportunity, it’s worthwhile to think about investing in some countries that stand to benefit from a breakdown in U.S.-China relations.

Here are three to consider: 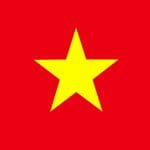 Over the past decade, as a result of rising wages in China and India, many companies have looked to other countries for cheap labor. Vietnam has greatly benefited. It has become an outsourcing powerhouse.

Since 2012, Vietnam’s gross domestic product (GDP) growth has accelerated in every year but one. The exception was 2016 when growth fell to 6.2% from 6.7% the year before, still not a bad mark.

Vietnam joined the World Trade Organization in 2007. Even though it’s communist in name, the government has worked hard to transform the country into a business-driven economy and welcomed foreign investment.

Vietnam has invested heavily in educating its young people in STEM (science, technology, engineering, and mathematics) and English, a sure sign that it intends to be a big player in globalization. 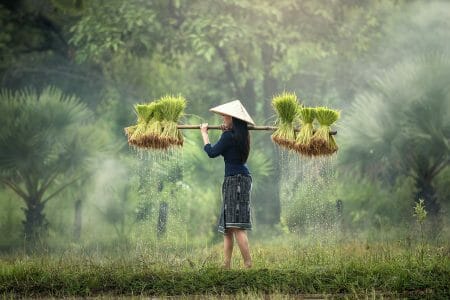 As the U.S. and China continue their bickering, this small, but fast-growing country is a prime candidate for companies seeking alternative suppliers and places of manufacturing.

As an example, through the first six months of 2019, Vietnamese exports to the U.S. have increased by a whopping 33%. The demand is so high that Vietnamese companies are reportedly turning down orders because they aren’t equipped to handle the scale of the work.

In fact, capacity constraint, as well as a still under-developed infrastructure, are a major challenge for Vietnam. These factors are keeping the economy from growing even faster. However, foreign companies see the opportunity in Vietnam and they are investing. Especially if the U.S.-China trade war drags on, the money will flow into Vietnam and help it to continue to develop and handle the growing demand. 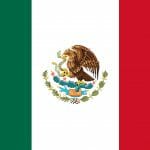 Our immediate neighbor to the south, Mexico, has replaced China as America’s largest trading partner in the first half of 2019.

U.S. companies that want to avoid the high tariffs of Chinese imports see Mexico as a natural alternative because it’s so close. Some Mexican products that have enjoyed a major jump in U.S. demand include electronic commodities like wires and fiber optic cables.

President Trump has threatened Mexico with additional tariffs as well, but Mexico has been far more willing than China to compromise. Mexico’s moves to appease Trump over the past year include signing a new trade agreement to replace NAFTA and pledging to do more to reduce the flow of illegal immigrants.

Despite some problems with corruption and organized crime, Mexico is one of the most business-friendly countries in Latin America. Look for Mexico to be another beneficiary of the trade war.

One way to invest in Mexico is via the ETF iShares MSCI Mexico ETF (EWW). 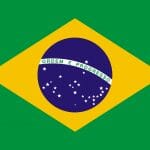 China has said that it will stop buying U.S. farm products entirely. But it has to get food from somewhere, and Brazil is one of those places.

Brazil is the largest exporter of soybeans to China, with the demand jumping 30% in 2018 and accounting for about 75% of China’s total soybean imports. Meanwhile, soybean imports from the U.S. fell by almost 50%.

Soybean, cotton, and maize account for about 70% of total Brazilian exports to China, but Brazil thinks that over time it will become more diversified. In about a dozen years, processed foods like packaged meat could make up half of Brazil’s exports to China. 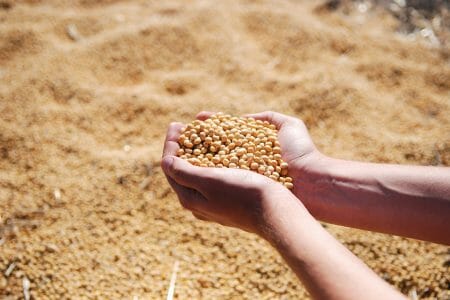 In recent years, China has poured money into Brazil. Most of that focused on food and energy, but China has also invested in telecom, auto, and renewable energies. Even if the current trade war between the U.S. and China ends soon, China will surely look to get even closer to Brazil.

Brazil is still emerging from a bad recession brought on by unwise government policies, and deepening ties with China would make a lot of sense.

The above three countries insulate your portfolio from the trade war. They also allow you to profit from it. But what if you’re looking for profits that are immune to the tariff fight and other sources of uncertainty? My colleague Jim Fink can help.

Jim has fine-tuned a proprietary but very simple investing technique that generates steady income, in up or down markets. Jim’s trading system couldn’t care less about the trade war or even the looming recession.

Jim’s returns are so reliable, they look just like a paycheck. With his system, you can get regular deposits of $2,950 or more, every Thursday.

We explain exactly how this simple moneymaking technique works, and what you need to do to earn your first “paycheck” using it. Click here for all the details.