Is Struggling Walgreens a Bargain Buy?

I have recommended many stocks to my readers over the years. Perhaps none has frustrated me more than Walgreens Boots Alliance (NYSE: WBA), which has missed expectations and under-performed the market.

Is it time to give Walgreens “the boot”? Actually, despite WBA’s recent woes, now may be the time to scoop up the stock if you don’t already own it.

I added Walgreens to the Personal Finance Growth Portfolio three years ago after the Brexit vote that sent shockwaves throughout Europe. My reasoning at the time was that Walgreens had become oversold due to its extensive network of pharmacies in Europe and would soon recover.

I also believed that its pending acquisition of Rite Aid would reduce the U.S. pharmacy market to a duopoly that Walgreens would eventually dominate. I felt it had several advantages over rival CVS Health (NYSE: CVS) that would ultimately tip the scales in its favor.

Admittedly, none of those assumptions came true. The Brexit saga has gone on far longer than I ever would have imagined. Also, Walgreens had to scrap its acquisition of Rite Aid due to antitrust concerns and purchase some of its assets instead.

Even still, Walgreens hung in there. As recently as last December, WBA traded above $80. That is only slightly above my $75 buy limit, but its 3%+ dividend yield made it a respectable holding.

However, over the past nine months WBA has dropped all the way down to $50. Some of that is due to Amazon’s (NSDQ: AMZN) emergence as a presence in the online prescription drug business. Some of it also stems from Europe’s deteriorating economy, which totters on the brink of recession.

However, Walgreens’ European sales comprise less than 10% of its total revenue. As for Amazon, it remains to be seen if it becomes an existential threat to Walgreens or ends up abandoning this sector just as it has many others.

The biggest threat to Walgreens may be political — as in presidential candidate Bernie Sanders (I-VT). Senator Sanders’ much-publicized “Medicare for All” proposal would effectively convert the U.S. health care system into a single-payer system.

Even if Sanders does not win the Democratic primaries, whoever does may still feel obliged to include some sort of single-payer health care plan as part of their platform. And if that person ends up becoming the next POTUS, getting such a costly program through Congress may prove impossible. 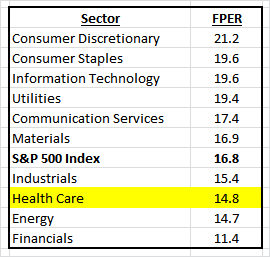 Regardless, the entire health care sector is under pressure. The sector’s forward price-to-earnings ratio (FPER) of 14.8 at the beginning of September made it one of the cheapest sectors in the S&P 500 Index.

Only energy and financial stocks are cheaper, and they are both dealing with enormous macroeconomic trends that may take several years to unwind.

However, Walgreens’ problems could all be solved within the next year. Boris Johnson, the newly elected Prime Minister of the United Kingdom, is pushing for a no-deal Brexit resolution that could end up driving Great Britain back into the arms of the European Union if he fails.

The Democratic Party may abandon a single-payer health care plan for something more palatable to swing votes prior to next year’s election. And Amazon, whose presumed infallibility in online retail marketing has been recently refuted by the likes of Target (NYSE: TGT) and Walmart (NYSE: WMT), may discover the online drug business is more trouble than it’s worth.

Of course, all of that is conjecture (or wishful thinking) and may not happen. What I do know for a fact is that Walgreens’ FPER of only 8.3 times next year’s earnings is about half the multiple for the overall stock market.

Also, Walgreens’ forward annual dividend yield of 3.6% is more than twice the yield of the 10-year Treasury note. And that’s at a payout ratio of less than 35%, meaning the company has room to raise the dividend if that’s what it takes to attract investors.

One thing Walgreens has been doing with its free cash flow is buying back its own stock to the tune of $10 billion. That obviously hasn’t prevented its share price from falling, but it should help it rise faster once it starts heading back up.

I don’t know exactly when that will be, but I’m going to hold WBA into next year to see if my hunch pays off.

Someone else who has a good feeling about Walgreens is my colleague Jim Fink.

Jim Fink is the chief investment strategist of Options For Income, Velocity Trader, and Jim Fink’s Inner Circle. Last week, he opened a position in WBA that has the potential to deliver a 100% gain in just eleven days!

How does Jim do it?

Jim has developed a proprietary investment method that consistently beats Wall Street at its own game, in markets that are going up, down or sideways.

Want to learn about Jim’s next trades? Click here now for all the details.