In addition to my duties as the managing editor of Investing Daily, I’m an aviation enthusiast who flies helicopters. Hence my wife Carole’s insistence that I carry ample life insurance.

It should come as no surprise that I revere the Wright brothers, who made the first controlled flight of a powered aircraft in 1903.

In a speech to the Aero Club of France in 1908, Wilbur Wright said: “I confess that in 1901, I said to my brother Orville that man would not fly for fifty years. Ever since, I have distrusted myself and avoided all predictions.”

As an investment strategist, it’s impossible for me to avoid making predictions. It’s my job. As autumn approaches and the end of 2019 comes into view, my colleague Jim Pearce thought it would be an opportune time to seek my “big picture” perspectives for the rest of this year and 2020.

Jim Pearce is the chief investment strategist of our flagship publication, Personal Finance. If anyone knows the right questions to ask, he does.

Is a recession brewing? If so, when do you think it will occur?

The odds are increasing that we’ll get a recession within the next 12-18 months. The inverted yield curve, in addition to negative economic data, don’t bode well.

Notably, this week the Institute for Supply Management reported that its index of national factory activity dropped to 49.1% in August, missing the consensus estimate of 51.1 and down from 51.2% in July. Any reading below 50% indicates a contraction in activity.

What’s more, the Bureau of Labor Statistics recently announced that half a million fewer jobs were created in 2018 and the first quarter of 2019 than had previously been stated. Job report numbers routinely get revised after the fact, but the sheer magnitude of this downward revision tells us the economy hasn’t been performing as strongly as advertised. A major headwind for the economy, of course, is the U.S.-China trade war.

That’s all bad news for stocks. A recession occurs when there’s a period of falling economic activity spread across the economy, lasting more than a few months. A bear market occurs when stocks are down 20% from their all-time high. Since 1950, the U.S. has witnessed 10 recessions and 9 bear markets. Nearly all of the recessions have overlapped with the bear markets.

Under the economic conditions you’ve just described, which sectors look most appropriate to you now?

As the late-stage economic expansion shows signs of turning toward contraction, investors should rotate toward defensive sectors such as energy, health care, consumer staples, utilities, and financials. The following chart is a handy guide. 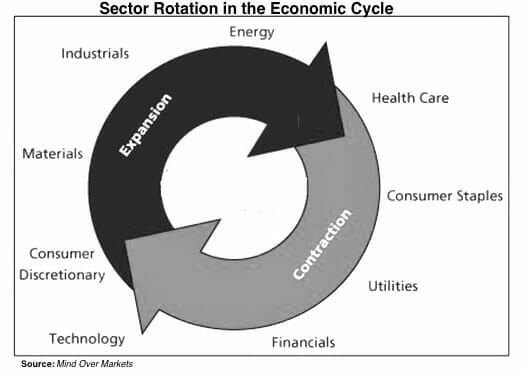 The energy sector is embattled. Do you see value plays in the oil and gas industry?

Absolutely. Energy should appeal to bargain hunters right now. The energy sector is undergoing upheaval, with crude oil prices volatile and on a downward trajectory. But the gyrating energy sector is home to value plays, as jittery investors abandon even quality equities. U.S.-based refiners stand out as compelling buys.

Refiners are often lumped in with chatter regarding energy prices. However, the products produced in refineries aren’t the same as the crude quoted in the market. Although the refining industry is affected by crude pricing, it’s more complicated than a simple rise or fall in the per-barrel price.

Because refiners must buy crude as feedstock, rising oil prices eat into profit margins. At the same time, refiners benefit from higher prices for their products.

Refiners make money on the spread between the cost of crude oil and the value of their refined products — aka, the “crack spread.” As U.S. shale oil output boomed, domestic crude production began to outstrip the capacity of refineries in some areas. Further, the light, sweet crude that is characteristic of shale isn’t a great match for refineries that have invested in heavy, sour processing.

The result has been discounted domestic crudes. Certain refiners can purchase these crudes, process them, and sell them into the export market at higher global market prices.

U.S. refiners are well-suited to leverage these economic realities. They all possess significant refining capacity in the mid-continent region of the U.S. They also have access to Gulf Coast export capacity. Investors should make energy stocks, especially refiners, a key part of their sector rotation strategy.

Do you expect a correction to hit the stock market sometime this year?

Yes, I do. Corporate earnings are officially in a “recession,” which is defined as back-to-back quarters of negative growth. And yet, stock valuations are at historic highs. Something has to give.

Many money managers and financial opinion leaders are calling for a stock market correction sometime this year. By definition, a correction occurs when the market falls 10% from its 52-week high.

For the last four decades, every bull market has experienced a correction, which is simply a healthy restoration of equilibrium. With stock valuations now at excessive levels, investors should welcome a correction. It’s hard to find value nowadays; a correction would put many appealing but overpriced stocks back on the bargain shelf.

From your point of view, what’s the most exciting investment opportunity out there right now?

In a word? Marijuana!

Marijuana, for years demonized as the “devil’s weed,” is becoming a mainstream multi-billion-dollar consumer products industry in both the recreational and medical sectors. Canna-business, as it’s sometimes called, represents one of the greatest investment opportunities that you’ll experience in your lifetime.

Statistics on the marijuana business vary, depending on who’s compiling them. According to the latest (and very credible) statistics from Arcview Market Research and its research partner BDS Analytics, spending on legal cannabis worldwide is expected to hit $22.8 billion by 2020. The adult-use (recreational) market will account for 67% of spending; medical marijuana will take up the remaining 33%. This chart tells the story:

Powerful, multi-year tailwinds are propelling marijuana companies. As an increasing number of countries and U.S. states legalize marijuana, pot companies are proliferating. However, you must remain wary of the micro-cap marijuana stocks that are exploiting investor fascination with this investment theme. Many of these companies are dubious penny stocks that will soon implode.

Without a doubt, there’s money to be made in the marijuana industry — big money. But investors should steer clear of thinly capitalized companies that lack significant products in the marketplace. A shakeout is brewing among the weaker players.

Investors are indiscriminately throwing their money at marijuana stocks with a lemming-like fervor that’s reminiscent of previous market frenzies — Dutch tulip mania and the dot-com bubble come to mind.