The Earnings Recession…and Why It Matters

Welcome to the corporate earnings recession. The big question now is, what does it mean for investors? A crucial pillar propping up this aging bull market has been growing earnings. That pillar is now gone.

According to data from research firm FactSet, the S&P 500 reported a year-over-year decline in earnings per share (EPS) growth for the second straight quarter. The actual number came in at -0.4% — not great, but admittedly better than the projected decline of -2.8%.

The growth trajectory isn’t expected to turn positive. For the third quarter, the consensus expects a 0.3% year-over-year decline in earnings for S&P 500 companies.

And yet, stock valuations remain historically high. The forward price-to-earnings ratio of the S&P 500 currently hovers at 17.6, higher than the 10-year average of 14.6. To justify significant stock price appreciation, we’ll need to see a big improvement in corporate earnings. We probably won’t get it.

Read This Story: Do The Math! The Numbers Don’t Add Up

With second-quarter corporate earnings reports now in for the S&P 500, here are the aggregate results for Q2 relative to recent quarters. As you can see, actual earnings and revenue have a consistent track record of beating expectations: 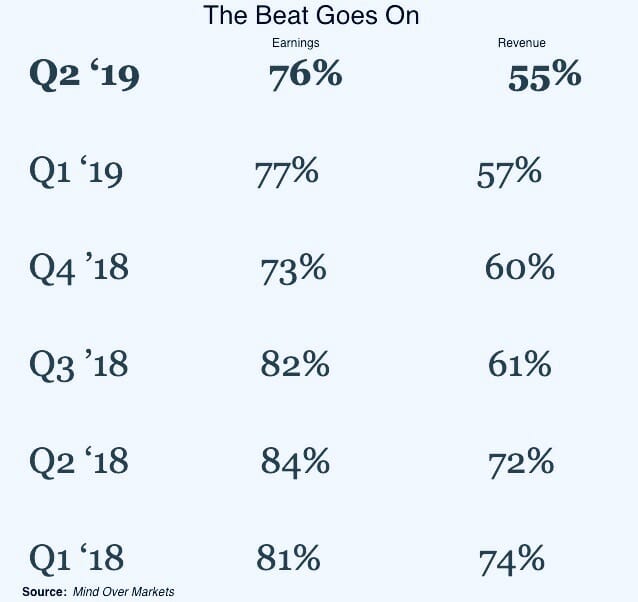 The high percentage of companies that beat quarterly expectations seems impressive, but there’s a dirty little secret that Wall Street doesn’t like to talk about. Corporate managers habitually “game the refs” by low-balling forecasts, so they can more easily beat estimates and get a lift in share prices.

After a blockbuster corporate earnings performance in 2018, expectations for earnings growth this year plummeted. Some of that pessimism was born of basic math. Year-over-year comparisons became more problematic, after the temporary boost provided to 2018’s earnings from the U.S. tax overhaul bill signed in December 2017.

Tariffs are hurting the earnings of companies with greater overseas exposure, by increasing costs, lowering demand and squeezing profit margins. The slowing global economy also weighs on both the top and bottom lines.

Europe’s woes are even worse. Analysts reported this week that the companies listed on the pan-European STOXX 600 index are likely to report a 1.9% decline in earnings for the July-September quarter. The trade war, Brexit chaos, instability in Italy, and falling demand from China are the major culprits.

The Institute for Supply Management (ISM) reported this week that its index of national factory activity dropped to 49.1% in August, missing the consensus estimate of 51.1 and down from 51.2% in July. Any reading below 50% indicates a contraction in activity.

President Donald Trump, self-proclaimed “Tariff Man,” asserts that the U.S. economy is strong enough to withstand a trade war. However, recent negative economic reports from the ISM and elsewhere undermine that assumption.

The negative effects of protectionism extend beyond the cost of tariffs. What’s under-reported in the media is how Trump’s weaponizing of trade policy is leaving scars on international relations and business confidence. Even if the trade war ended tomorrow (and it won’t), the psychological damage has been done and it will linger.

Case in point: Chief Executive magazine on August 19 published the latest monthly iteration of its survey “CEO Confidence Level in Business Conditions One Year From Now,” which fell 6% in August from July. The influential magazine considers this level a “weak” outlook.

From its August survey of top CEOs, the magazine draws the following conclusion:

“Adding to the disruptions and uncertainty [of the U.S.-China trade war] are a tight labor market and talk of a recession. CEOs say the intensifying trade war is precipitating the economic downturn and no amount of interest rate cuts can compensate. In fact, 72% are doubtful the Fed’s policy change will succeed in sustaining the current economic cycle much longer.”

Amid these conditions, how should you position your portfolio? Rotate toward defensive sectors, choose value over momentum, and keep plenty of cash on hand.

I’m especially bullish right now on utilities. As trade tensions clobber multinational export-dependent companies, it’s important to remember that utilities derive zero revenue from China, according to research firm Strategas. Two other sectors I currently recommend, consumer staples and health care, only get 3.9% and 4.6% of their revenue from China, respectively, compared to the average of 5.8% for the S&P 500.

In troubled economic and geopolitical times, investors should turn to the stocks of companies that provide essential services.

The world can do without another Starbucks or a faster smartphone. It can even do without Google and eBay. But even in the worst of times it can’t do without lights, heat or clean drinking water.

While investors worry about a recession, utility stocks have been soaring. As of the market’s close on Wednesday, the benchmark Utilities Select Sector SPDR (XLU), the largest utilities exchange-traded fund (ETF) by assets, had returned 21% year to date, compared to a YTD return of 18.2% for the SPDR S&P 500 ETF (SPY).

The XLU’s performance is all the more impressive, when you consider that utilities are dividend payers and less risky than the more growth-oriented broader market.

With interest rates still at low levels and growth stocks overvalued, high-dividend utilities are an attractive hedge. The utility sector has enjoyed a big run-up so far this year but it’s poised to continue outperforming.

Utilities ETFs can be accurate barometers regarding overall risk appetite in various market climates. As risks mount in the second half of 2019, investors have been rotating toward traditional safe havens. Make sure you do the same.