That type of extreme volatility is usually caused by a crisis that threatens to undermine the entire business. Something so unexpected that even the insiders on Wall Street didn’t see it coming.

Example: Four years ago, German automaker Volkswagen AG (OTC: VWAGY) fell 40% when news broke of an emissions testing scandal sanctioned by the company’s senior executives. To this day, its share price has still not recovered.

That’s why I was surprised when WDC plummeted to $36 three months ago. As far as I knew, there was no existential crisis embroiling Western Digital.

The stock also traded down to that level during last December’s correction, when panic enveloped the entire market. However, it had recovered all the way back to $55 by April before its second plunge commenced (see WDC stock price chart). 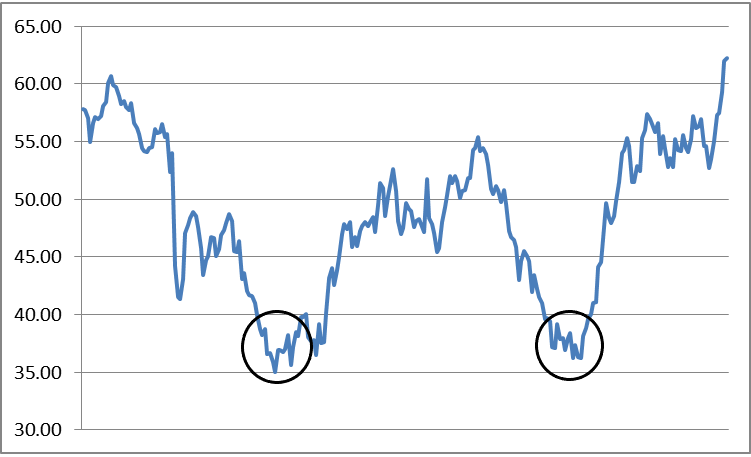 Yes, I understand the short-term risk the U.S.-China trade war poses to the tech sector. However, trade wars don’t last forever. Sooner or later the two countries will kiss and make up and suddenly the tech sector will be hot again.

That aside, the degree to which memory device makers were punished astounded me. A supply glut of flash drives was to blame, suggesting Western Digital’s profit margins would get squeezed down to nothing until the excess inventory was exhausted.

Of course, how quickly that glut would disappear is also a function of demand. And in that regard, Wall Street got it wrong.

Demand on the Rise

Demand for the type of memory devices made by Western Digital is on the rise. Company CEO Steve Milligan included this statement in the press release accompanying Western Digital’s fiscal Q4 results on July 31:

“We are seeing signs of improving conditions in the flash market and believe that it has reached a cyclical trough. With continuing expectations for a positive demand environment, a robust product portfolio and expanding customer engagements, we expect to deliver improving financial results as we move through fiscal 2020.”

The company’s management team is feeling good enough about its future growth prospects that on September 10 it announced it acquired Kazan Networks. Kazan designs products that enhance data center productivity.

Since Kazan is a privately held company, terms of the deal were not disclosed. However, it’s a safe bet that Western Digital would not be in acquisition mode if the market were contracting.

Despite its recent woes, Western Digital is still sitting on more than $3 billion in cash. That works out to nearly $12 per share in cash, about 20% of WDC’s current share price.

That gives Western Digital considerable leeway in how it allocates that capital. The company could repurchase more shares of its stock, or it could acquire additional businesses.

Regardless, the company has come roaring back to life after being abandoned by Wall Street a year ago.

Last year, Western Digital plunged when analysts reduced their revenue forecasts for flash drive sales. This year, WDC has soared back up the charts as that fear has proven overblown.

I’m not the least bit surprised. Six months ago, I explained how Wall Street insiders cash in on stocks like Western Digital. It’s a simple three-step process:

Sound like a good way of making money to you? It does to me, except it requires having access to information that only a select few on Wall Street are privileged to know.

You and I will never beat Wall Street at its own game. However, that doesn’t mean we can’t play a few games of our own.

In fact, my colleague Jim Fink has developed a system that even Wall Street can’t match.

Jim has fine-tuned a proprietary but very simple investing technique that generates steady income, in up or down markets.

Jim’s returns are so reliable, they look just like a paycheck. With his system, you can get regular deposits of $2,950 or more, every Thursday.

We explain exactly how this simple moneymaking technique works, and what you need to do to earn your first “paycheck” using it. Click here for all the details.