I traveled to Myrtle Beach last weekend to play in a pickleball tournament. Pickleball is a game mostly played by baby boomers, many of whom are retired and living on a fixed income.

One night, a group of us went out for dinner and eventually the conversation got around to the subject of investing. “If the Fed cuts rates again,” one of them exclaimed, “I won’t earn enough interest from bonds to cover my monthly expenses.”

I could only shake my head in disbelief. With the yield on the 30-year Treasury bond near 2%, you better have a lot of money saved up if you plan on living off of interest payments.

Most folks I know don’t have $3 million in cash lying around. If they’re lucky, they might be able to scrape together $1 million between their various retirement accounts and other financial assets by the time they are 65.

The good news is, they can still generate $5,000 of monthly income with only $1 million. How? By earning a robust 6% dividend yield from stocks instead of a measly 2% interest rate from bonds.

I’m the chief investment strategist of Investing Daily’s flagship publication, Personal Finance. At the moment, there are 10 holdings in the PF Income Portfolio that pay a dividend yield of at least 6% That list includes pharmaceutical giant AbbVie (NYSE: ABBV) at 6.0%, tobacco company Altria (NYSE: MO) at 8.3%, and midstream energy conglomerate Enbridge (NYSE: ENB) at 6.2%.

In fact, the 20 highest-yielding holdings in PF’s income portfolio pay an average annual dividend yield of 6.2%. Those stocks are spread across all but one of the 11 sectors that comprise the S&P 500 Index.

As you might expect, the only sector not represented in this high yield portfolio is information technology. Those stocks pay little or no yield due to their high growth prospects.

The absence of tech stocks in this portfolio has hurt its overall performance. During the past year, this score of 20 stocks declined 5% in value while the SPDR S&P 500 ETF (NYSE: SPY) gained 5%.

That doesn’t worry me, though. Recently, the stock market has been gravitating towards income stocks as recession fears have escalated.

During the month of August, the tech-heavy NASDAQ Composite index fell 2.6%. At the same time, the Vanguard Utilities Index ETF (NYSE: VPU) gained 4.5% as shown in the chart below. 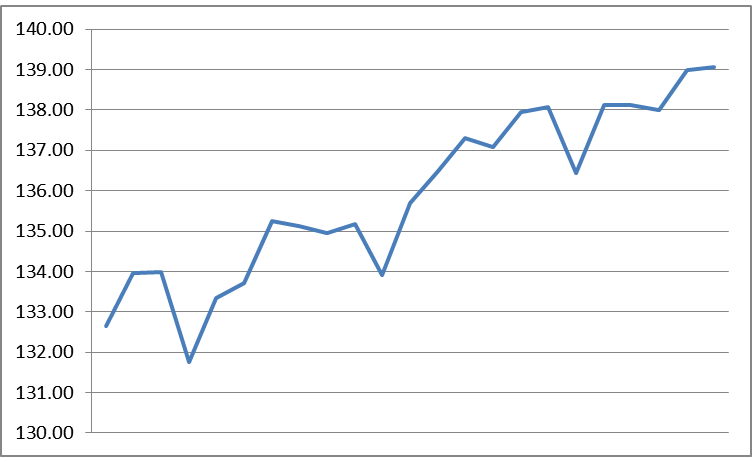 Unfortunately, that fund’s 2.8% dividend yield is less than half of the 6% threshold most of my pickleball buddies need to make ends meet.

The challenge, then, is in creating a portfolio that delivers both high yield and share price stability. After all, that’s why people buy bonds in the first place, right?

If the Fed does cut rates again, bond yields will go even lower. That means bond prices will go a bit higher, at least for a while.

But sooner or later, interest rates will bottom out and eventually reverse course. And when that happens, bond owners might begin to panic.

Two years ago, I postulated that a wave of money coming out of the bond market could drive high-dividend value stocks higher. That hasn’t happened yet, thanks to last year’s tax cut that fueled momentum stocks a bit longer than I expected.

Most of the benefits from the tax cut have been realized. Now, trade tariffs threaten to undo all that gain and then some.

I believe the stock market’s rotation from growth to income will accelerate next year as the federal deficit begins to widen. As that occurs, the Treasury will have to sell more debt to finance the budget. That will push bond prices lower.

In the United States, the bond market is nearly twice as big as the stock market. That means a 10% move out of bonds could increase demand for stocks by as much as 20%.

Since that money is coming out of bonds, it is not unreasonable to assume that most of it will be looking for income. High yield stocks with a history of raising dividends should be the primary beneficiaries.

As I explained this to my pickleball buddies in South Carolina, I could see the light slowly coming on in their heads. But for some, even an annual yield of 6% isn’t enough to get the job done.

For them, I suggest they check out what my colleague Amber Hestla has been up to lately.

Amber will be part of a special online event, scheduled for September 24, that will pinpoint money-making opportunities in one of the greatest investment opportunities you’ll ever see in your lifetime — marijuana. But here’s the snag: the industry is getting crowded and a shake-out is imminent. You need to pick the right marijuana stocks.

That’s where Amber’s special event comes in. If you act quickly, you can secure a spot at our exclusive cannabis trading event on September 24. We’ll show you how to make life-changing amounts of money, within a highly lucrative (but largely unknown) sliver of the marijuana market. Click here to sign up.