4 Steps to Correction Proof Your Portfolio

Could the stock market be headed for another correction this year?

I hope not, but it’s possible. Especially if a truce to the trade war with China is not achieved in time to save Q4 retail sales this year.

This year’s chart looks a lot like last year’s, only more extreme. In 2018, the index dropped 9% during the first quarter and then rallied 13% before its fourth-quarter collapse (first box in the chart below). 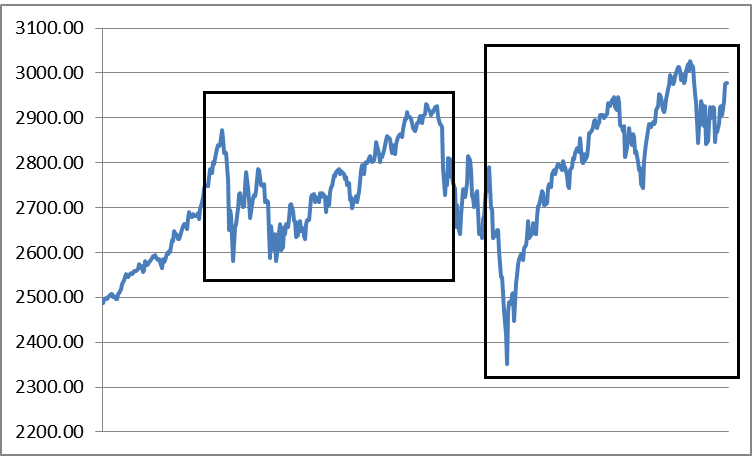 This time, the index rallied 25% from its December 2018 low to its July 2019 peak (second box in the chart above). Does that imply that a subsequent drop could also be nearly twice as severe?

Not necessarily. But the threat is real and is worth examining to determine how it may affect your investment portfolio.

Many retailers earn all of their annual profit during the fourth quarter due to holiday shopping. Take that away, and what you have are a lot of unprofitable companies waiting nine more months until the next holiday season.

In this case, that timing would also coincide with the next general election cycle. With massive federal spending programs such as “Medicare for All” and the “Green New Deal” potentially in play, investors may decide that it’s time to cash in their chips and sit this one out.

That’s the pessimistic view of how events may unfold over the next 12 months.

The optimistic view is that a new trade deal with China will get done soon and our elected officials will steer away from budget-busting programs regardless of which party is in power.

Historically, that’s the way it has usually turned out. Of course, there have been some notable exceptions such as the stock market crash 90 years ago that ushered in the Great Depression.

The 1929 crash was blamed on rampant stock market speculation against a backdrop of low wages, decreasing productivity, and rising debt. A sound argument can be made that all those factors are again at work today.

During the 1920s, the nation’s largest economic sector — agriculture — was contracting at an accelerating pace. That resulted in an escalating number of loan defaults by farmers that forced banks to rely more on stock market gains to offset those losses.

According to the U.S. Bureau of Economic Analysis, “Finance and insurance; retail trade; and health care and social assistance were the leading contributors to the increase in U.S. economic growth in the first quarter of 2019.” 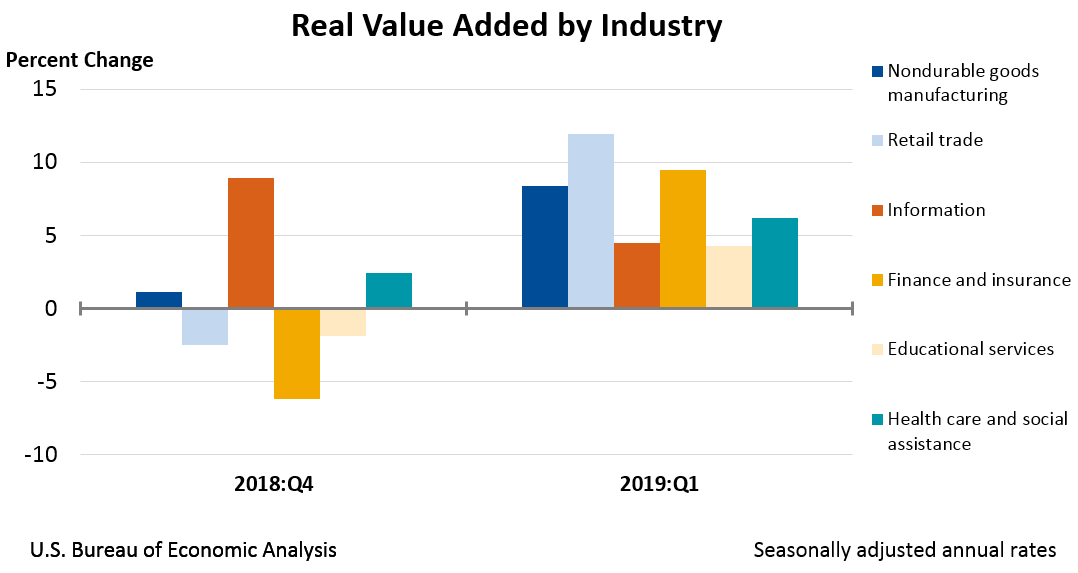 In fact, retail trade was the single biggest contributor to gross domestic product (GDP) growth during the first quarter of this year. Retails sales grew at an 11.9% rate during Q1, while finance and insurance increased by 9.5%.

The sector that is currently contributing the most economic growth, retail trade, is also the industry most at risk if the trade war with China goes on much longer. The second most critical sector — finance and insurance — will also suffer if consumer spending slows downs appreciably.

That means the second prerequisite for a major stock market correction is also in place. If American consumers stop spending, GDP growth could slow to a crawl.

Of course, the big difference this time is central banker policy. Ninety years ago, the Fed tightened credit by raising rates as the economy was stalling out.

Making money more expensive snuffed out what little chance there may have been for avoiding a recession. Also, it most likely caused the recession to morph into full-blown depression.

That mistake will not be made again. Two months ago, the Fed cut interest rates for the first time in more than 10 years.

Heading into this week’s Fed meeting, the conventional wisdom is that another quarter-point rate cut is on the way. That should keep consumers spending. It would also leave room for another rate cut in the fourth quarter if one is necessary.

However, if the trade war has not been resolved by then, even the Fed may not be able to stave off a stock market correction. In that case, we suggest the following:

Those four measures should help keep your portfolio intact. But if you’re looking to make money no matter how the trade war turns out, turn to a “mega-trend” with unstoppable momentum: the roll-out of 5G, the next generation of wireless technology.

The companies involved in 5G are tapped into a tech revolution that will pay off with big profits for early investors, regardless of changing public policy or even economic cycles. Click here for the latest 5G opportunities.