5G: The Fight for the Future

The automobile, airplane and telephone of the early 20th century revolutionized society, shrinking distances and speeding up life. The personal computer, smartphone and Internet represent another wave of profound change.

Welcome to the next wave: the Internet of Things (IoT).

IoT is a seamless system whereby everyday objects are integrated into a data-sharing network. If you’re looking for an unstoppable investment trend, you’ve found it with IoT.

Driving IoT will be 5G, the latest generation of wireless technology.

As an investor, you should keep an eye on 5G. The companies developing and leveraging 5G are huge money-making opportunities. As the U.S. and China jockey for advantage in rolling out 5G, we’re witnessing nothing less than a fight for the future.

5G also happens to be a pivotal battlefield in the trade war, which shows no sign of relenting.

The European Union’s incoming trade commissioner said Tuesday that the EU will strive to help President Trump see “the error of his ways” on trade policy, so he can abandon his “reckless” protectionism.

Those trade policies already are hurting the global economy and its growth engine, China. Beijing reported yesterday that the country’s producer price index fell 0.8% in August, the steepest rate of decline in three years. Companies in the world’s second-largest economy are cutting prices to offset sputtering demand caused by the long-running trade war with the U.S.

Trade tensions between the U.S. and China go beyond the Trump administration’s desire for the Chinese to import more goods from our country. Global hegemony is at stake.

At the heart of the titanic clash is 5G technology, the “fifth generation” of wireless capability that provides faster and broader bandwidth than 4G.

Think of current 5G efforts as a “moon shot.” In the space race of the middle 20th century, Russia in 1957 launched Sputnik, the first artificial earth satellite. The event shocked America and catalyzed the country’s resolve to invest in science and beat the Soviets.

The U.S. got to the moon first in 1969 and along the way, our scientists generated a variety of technological breakthroughs that boosted our military and filtered into the consumer sector. 5G is no less momentous — perhaps more so. The country that loses the 5G race will lose the future.

Under the “Made in China 2025” plan, the Middle Kingdom has pinpointed the key industries that it views as strategic and seeks to dominate. A linchpin of this march toward global dominance is 5G technology.

5G will facilitate IoT by allowing several interconnected electronic devices and machines to communicate with each other instantaneously at ultra-fast speeds.

IoT devices exchange information with each other via a central server, without a human being as intermediary. They use sensors to communicate actionable data, such as fuel levels, inventory capacities or room temperatures, through a wired or wireless network to a software application.

IoT is giving birth to driver-less cars, self-calibrating medical devices, and smart homes, among other things. IoT also automates the delivery of services and billing, supply chains, and warehouses.

5G will pave the way for a new wave of technological advancement, which explains why so many companies both large and small are jumping onto the 5G bandwagon. As the following chart shows, 5G adoption enjoys a multi-year upward trajectory: 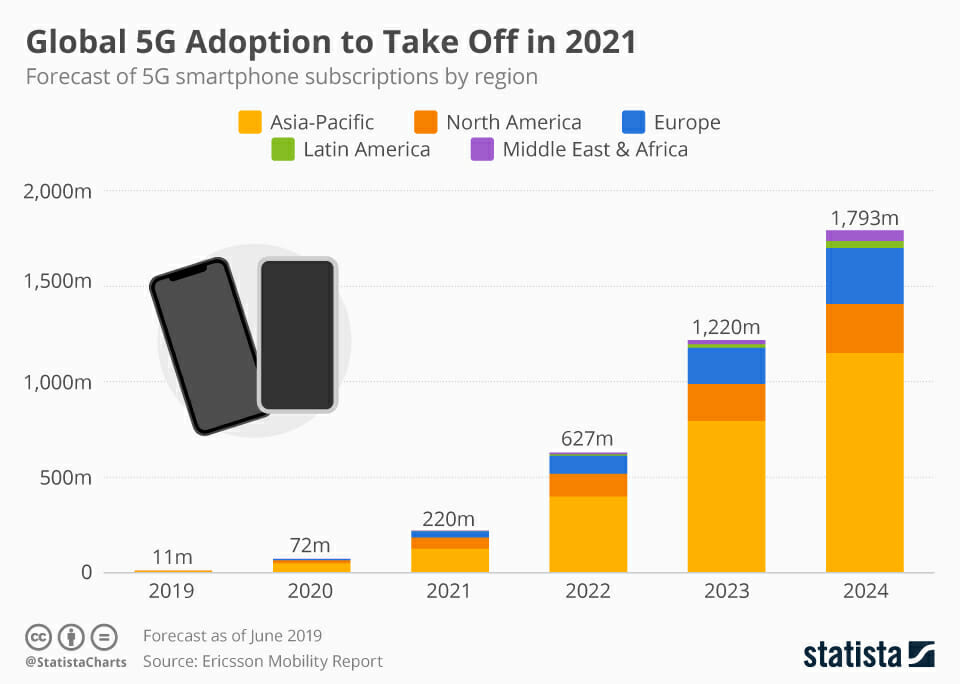 The race to deploy and control 5G around the world also entails a national security component, which has prompted the U.S. to initiate trade sanctions to protect proprietary intellectual property from acquisitions, offsets and outright theft. The White House has imposed sanctions or blocked mergers when it looked as if America’s interests in 5G were threatened.

Specifically, the Trump administration has argued that national security concerns compel it to prevent Huawei, the world’s largest manufacturer of broadband gear, from supplying 5G infrastructure.

China-based Huawei is a private company and the second-largest manufacturer of smartphones in the world, behind Samsung Electronics (OTC: SSNLF) and ahead of Apple (NSDQ: AAPL). China sees Huawei as an incubator for innovation. The Trump administration sees the tech giant as a de facto espionage operation.

The White House accuses Huawei of illicitly procuring proprietary Western technology, at the behest of Beijing. The U.S. Commerce Department has threatened (albeit, repeatedly delayed) strict rules banning U.S. companies from doing any business with Huawei, whether its buying or selling equipment. Those rules are currently in abeyance but could go into effect anytime President Trump gets an itchy twitter finger.

The U.S. development of 5G is occurring entirely within the private sector, whereas China’s state-run economy is devoting considerable government resources to the effort. Beijing already has budgeted $400 billion towards development of 5G, a commitment that puts the U.S. at a disadvantage.

The White House argues that its tariffs are designed to bring back American jobs that have been destroyed by globalization. The problem is, globalization has been a powerful trend since the end of World War II. Corporations rely on lower cost labor to continually boost earnings…which in turn raises the stock prices of companies that are owned in millions of retirement plans. I’m talking about your 401(k).

To be sure, the U.S. imports more than it exports, particularly manufactured goods. But the U.S. government’s trade numbers can be misleading, because they emphasize lower-skilled manufacturing jobs and underestimate the importance of value-added services.

In the services sector, which tends to generate higher-paying skilled jobs than in manufacturing, the U.S. ran a $244 billion trade surplus last year.

Regardless of trade policy, the momentum of 5G can’t be stopped. That spells opportunity for the shareholders of the chipmakers, telecoms, systems builders, and device makers that benefit from lightning quick connectivity.

Over the long haul, the biggest stock market winners are companies that defy the status-quo and introduce disruptive new technologies that create entirely new industries and products.

Imagine if you had been able to invest in Ford, Boeing, Ma Bell, Apple, or Google in their early days. The emergence of 5G represents a similar window of opportunity.

Want details on how to profit from 5G? Click here now for our latest report.