As a stock market analyst, I much prefer discussing my many winning trades rather than the occasional clunker. A few months ago, I booked a nice profit in Xerox (NYSE: XRX) after it ran up 75% this year.

Also, I now have an unrealized gain of better than 100% in Target (NYSE: TGT) thanks to its recent surge. And Best Buy (NYSE: BBY) is up nearly 80% since I bought it despite its recent pullback.

However, you can’t ignore your losers. Sooner or later, you have to decide what to do with them. Over the past month, I’ve chronicled a couple of trades of mine that did not work out as expected.

On September 5, I explained why Walgreens Boots Alliance (NYSE: WBA) has become oversold and likely to rebound soon. Over the next few days, WBA shot up 10% and was trading at its highest price since April.

One week later I profiled struggling automaker Tata Motors (NYSE: TTM) and declared that it had bottomed out. The very next day it jumped more than 5%.

Today I will feature yet one more under-performing stock of mine in hopes that it will double in value by the time you are finished reading this article!

All kidding aside, there are valuable lessons to be learned from stocks that do not initially behave as we expected. In some cases, the best course of action to take is to cut your losses and move on.

But other times, patience and guile can be quite rewarding.

A Lot of Green from Big Blue

That’s what it took for me to turn a profit on International Business Machines (NYSE: IBM). I bought IBM two years ago while it was trading at $145.

A month after I bought it, IBM briefly spiked above $160. I considered taking a quick 10% profit, but I bought IBM for the long haul and decided to let it ride.

A year later I was regretting that decision. IBM dropped all the way to $110 by January of this year, turning my 10% gain into a 25% loss.

That’s when I decided it was time to take action. Rather than simply wait for IBM to get back above $145, I figured I might as well make some fast money while that was happening. 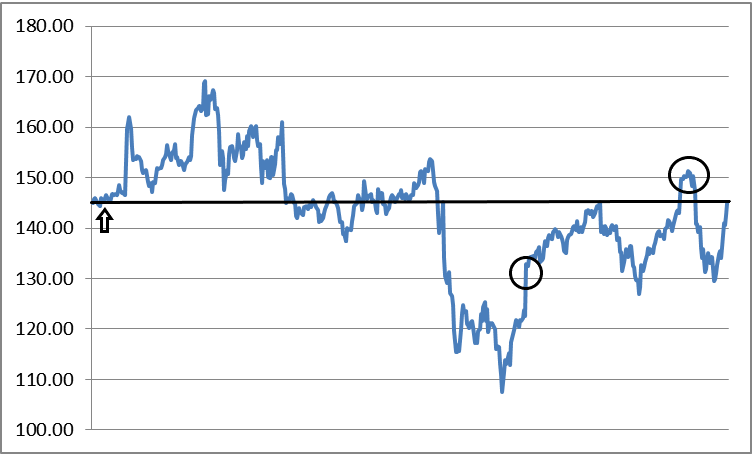 First, I waited until I felt certain that IBM had in fact bottomed out. Once IBM crossed above $130, that’s when I made my move.

I sold that same option for $21 two months ago when IBM’s share price rose above $150 (second circle in chart above). That works out to a profit of 90% in less than a year.

I still own IBM stock, which has since backtracked to my original cost basis of $145 (straight line in chart above). Even though its share price has gone nowhere during the two years I have owned it, IBM’s dividend yield of 4.5% is far higher than what a savings account would have paid me.

I am using the same strategy with General Electric (NYSE: GE), which I bought last fall after it fell below $10. A few months later I was regretting that move as well when GE fell below $7.

Once again, I decided to wait until I was sure that GE had bottomed out and then bought call options on it. This time, I went all the way out to January 2021 and chose the $10 strike price.

At first, I had a nice gain in that trade as GE’s share price rose back above $10. But that trade is back to breakeven for me after a short-seller accused GE of accounting malfeasance.

However, if you took my advice on GE a month ago, you should be sitting on a very nice profit. The call option discussed in that article has appreciated 25% since it was written.

As nice as that gain would have been, there are even better and faster ways to build wealth.

If you’re looking to make market-crushing gains in a short amount of time, tap into our exclusive cannabis trading workshop. We’ll show you how to make life-changing amounts of money, within a highly lucrative (but largely unknown) sliver of the marijuana market.

The legalization of marijuana is one of the greatest investment opportunities you’ll ever see in your lifetime. But here’s the snag: the industry is getting crowded and a shake-out is imminent. You need to pick the right marijuana stocks.