Is Global “Oilmegeddon” On the Way?

History shows that countries are willing to spill a lot of blood over crude oil. Are we on the brink of another oil war? As nuclear capabilities proliferate, it’s a question that involves the highest possible stakes.

We’ve been reminded in recent days that despite all the hoopla about electric cars and alternative energy, we still live in the Hydrocarbon Age. Crude oil remains the world’s most valuable commodity and significant supply disruptions wreak havoc politically, economically and financially.

The complex systems that produce, transport and process oil are among the most critical of all the “critical infrastructures.” When those infrastructures are attacked and damaged, investors typically run for the exits.

The Dow snapped its eight-day winning streak. Stocks probably would have fallen even further had it not been for the ample cushion of global oil supply.

U.S. stocks were poised to open lower Tuesday morning, with stock index futures in the red in pre-market trading. The Federal Reserve kicks off its two-day meeting today.

Houthi rebel groups in Yemen claimed responsibility for the weekend attacks, but it remains unclear where the drones originated and which countries were culpable. Analysts speculate that perhaps cruise missiles were involved as well. The U.S. promptly blamed Houthi ally Iran, which denied the allegations.

Washington and Tehran have been rattling sabers for months and the heated rhetoric over the attacks is boosting the chances of outright war. President Trump tweeted on Sunday that the U.S. military was “locked and loaded” to respond to the attack.

Nervous investors are wondering what it all means for their portfolios. Will this flareup in the Persian Gulf region prove the catalyst for the bull market’s demise?

Read This Story: Has The “Black Swan” Arrived…as a Drone?

For now, the Sino-American trade war has been sidelined by the Middle Eastern drama. Before I get to trading moves to make under these fraught conditions, let’s put the crisis in perspective.

The attacks crippled half the Saudi kingdom’s oil production, which amounts to 5% of the world’s output. It’s as if U.S. shale production were suddenly taken off-line.

But keep in mind, Saudi oil production and exports had been faltering even before the attack. Since November, the kingdom’s production has fallen, from 11 million barrels per day to under 10 (see chart). 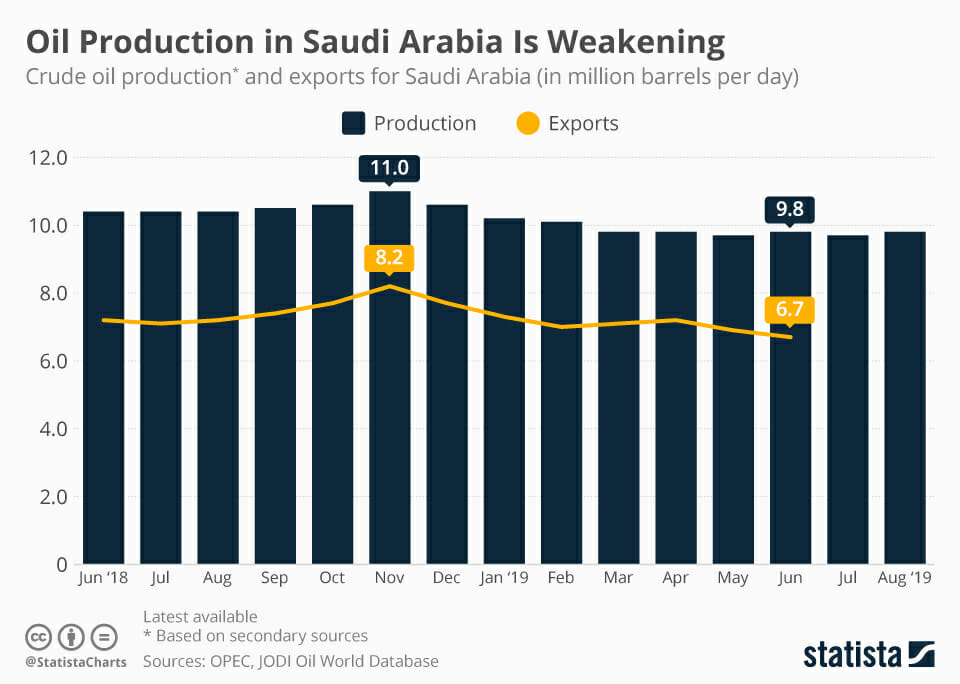 Existing stockpiles of oil could be used to offset the production losses from the attack, which in turn lessens the odds of a severe shock to the global economy. Saudi Arabia has about 27 days of supply stockpiled.

President Trump suggested via Twitter on Sunday that he could release supplies from the Strategic Petroleum Reserve, an assertion that partially calmed the oil markets. Indeed, it’s a stroke of good luck that the attacks occurred at a time when the world is awash in oil. Stockpiles of developed countries are at their highest levels since September 2017.

Can the Saudis defend themselves?

Problem is, the drone missile attacks on processing facilities in the heart of Saudi territory exposed the vulnerability of the kingdom’s oil infrastructure. It’s a threat that will always loom on investors’ minds, especially as geopolitical tensions rise. Who’s to say a drone (or cruise missile) strike couldn’t happen again? Even if production is quickly restored, the instability of the Middle East will be a lingering investment headwind.

Despite Saudi Arabia’s multi-billion-dollar purchases over the years of big-ticket weapons systems from the U.S., worries are emerging that the House of Saud can’t defend its territory. Pilot-less aircraft outfitted with ultra-sophisticated sensors and missiles are relatively easy for non-state actors to obtain.

It’s called “asymmetrical” warfare, by which a small group wields flexible technology combined with guerilla tactics to successfully fight a vastly bigger and better-funded rival. The Viet Cong insurgency of the Vietnam War comes to mind. The Saudi’s susceptibility to terrorism, as revealed over the weekend, could derail the planned initial public offering of the kingdom’s national oil company, Saudi Aramco.

The crucial unknown right now is how long it will take the Saudis to repair the damage and get their facilities back online.

About a decade ago, the attack would have pushed oil prices even higher, but that was before the Great American Shale Revolution. The U.S. now produces roughly 12.1 million barrels a day, twice the amount it produced in 2012.

Rising oil prices are bullish for the equities of many energy companies that have struggled this year because of crude’s previous slump. The shares of major energy producers bucked the overall downward trend yesterday and posted big gains. The benchmark exchange-traded fund iShares MSCI Global Energy Producers ETF (FILL) rose 4.04%.

Political missiles aimed at the Fed…

The energy sector’s extreme volatility is here to stay. The post-attack turmoil could tip the scales in favor of an interest rate cut, which the Fed could announce when it wraps up its meeting tomorrow. President Trump has been fiercely lobbying for a substantial cut.

In a pair of angry tweets Monday, the president renewed his attack — not on Iran, but on Federal Reserve Chief Jerome Powell:

“Producer prices in China shrank most in 3 years due to China’s big devaluation of their currency, coupled with monetary stimulus. Federal Reserve not watching? Will Fed ever get into the game? Dollar strongest EVER! Really bad for exports. No Inflation…Highest Interest Rates…”

Trump has in the past called Powell and his colleagues at the Federal Reserve “boneheads” and has even referred to Powell — a man Trump handpicked — as the “enemy.” Trump is clearly worried that a recession is coming to spoil his re-election bid.

“The United States, because of the Federal Reserve, is paying a MUCH higher Interest Rate than other competing countries. [China] can’t believe how lucky they are that Jay Powell & the Fed don’t have a clue. And now, on top of it all, the Oil hit. Big Interest Rate Drop, Stimulus!”

Drone strikes against vital Saudi oil installations, an out-of-control trade war, government by Twitter… it’s time for investors to get defensive. You should rotate toward safe havens, such as dividend payers in the utilities and real estate sectors. Small-cap stocks with limited overseas exposure are good bets, too.

Make sure your portfolio has exposure to gold, the classic hedge in times of crisis. Maybe there’s an investment message behind President Trump’s installation of gold curtains in the Oval Office.

Another shrewd move is to pinpoint “mega-trends” that will unfold regardless of terrorist attacks, oil supply disruptions, or interest rate policy. One such trend is the roll-out of 5G, the next generation of wireless technology.

For our new report on how to invest in 5G, click here.