The Next Investment Megatrend Has Arrived

When the stock market loses direction, keeping your eye on the horizon is usually the best way to make smart portfolio decisions. For that reason, keeping a short list of long term social and economic trends is critical to success.

In 1982, John Naisbitt released the first edition of his bestselling book Megatrends: Ten New Directions Transforming Our Lives. That was the year after I graduated from college, so it had a big influence on my career as a stockbroker which began the following year.

With the benefit of 37 years of hindsight, we now know that Naisbitt was correct on most of his expectations. He was particularly prescient in foreseeing the transformation of our society from an industrial base to one more dependent on information.

That prediction alone could have made a fortune for anyone willing to bet on it. Apple (NSDQ: AAPL) went public in December 1980 at a split/dividend-adjusted share price of 61 cents. Today, those same shares are worth more than 300 times that amount! 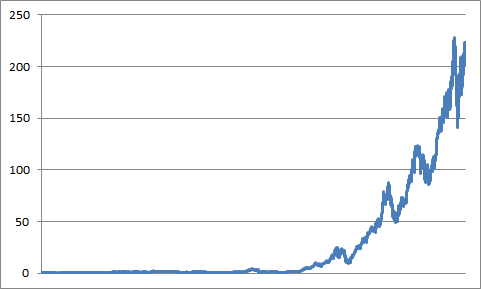 Although investing in Apple seems like a no-brainer today, back then it was considered a risky proposition. In fact, the state of Massachusetts barred the sale of Apple stock to its residents for being too speculative.

Ironically, one of Naisbitt’s other megatrend predictions, a shift from short term to long term perspectives, might have come in handy back then. Alas, that is one of the few predictions Naisbitt made that did not come true.

However, that is good news for investors since a new set of megatrends is sweeping through society. Just as back then, what seems speculative today may appear to be an obvious outcome in the future.

One of the critical drivers of Naisbitt’s original list of megatrends was the emergence of the baby boom generation as an unprecedented economic force. Born between 1946 and 1964, at its peak the baby boomer cohort comprised 40% of the U.S. population.

That is no longer the case. This year, the millennial generation (born from 1981 to 1996) will outnumber baby boomers for the first time. For that reason, marketers are shifting their focus away from aging baby boomers towards a new generation of consumers.

That makes sense, but it also ignores what I believe could be the greatest investment opportunity ever. That is, products that for different reasons appeal equally strongly to both baby boomers and millennials alike.

By the end of this year, 72 million baby boomers and 73 million millennials will comprise roughly 45% of the U.S. population. Although nearly equal in size, there is a huge disparity in their spending power.

That means the combined wealth of boomers and millennials will increase from 57% to 61% over the next decade. Identifying products that will appeal to them both should help narrow the search for the next generation of market-leading stocks.

A few weeks ago, my colleague John Persinos discussed the importance of 5G technology. As John explained, 5G (fifth generation) technology will enable the Internet of Things (IoT).

Simply put, the IoT will connect virtually every electronic device you use into an integrated network. The result will be increased productivity for manufacturers, improved efficiency for users, and reduced costs for consumers.

Millennials, the first generation raised on computers, prefer products that can be accessed and controlled remotely. Boomers, who grew up using analog devices, will benefit from appliances that do not require manual operation.

5G technology will also enable the proliferation of self-driving vehicles. What might be viewed as a social convenience to millennials may also be seen as a transportation necessity by aging boomers.

For that reason, we believe the social, cultural and business changes spawned by 5G technology will be one of the megatrends of the next decade and beyond. Understanding exactly how that dynamic will manifest itself in terms of consumer behavior will be critical to stock market success.

Next week, I’ll discuss two companies that are all but assured of being among the primary beneficiaries of the 5G revolution. But there will be many others, some with far greater growth potential.

That’s why our investment team has put together a new report on 5G opportunities. To learn more click here.