How to Profit from Reversion to the Mean

With so many crosscurrents battering the stock market, it can be difficult to determine which direction it may go next. For that reason, attempting to trade a broad market index such as the SPDR S&P 500 ETF (SPY) is little more than a guessing game.

The table below shows the year-to-date (YTD) performance of each index sector (through September 24) and its relative performance (RP) to the SPY in the far right column. 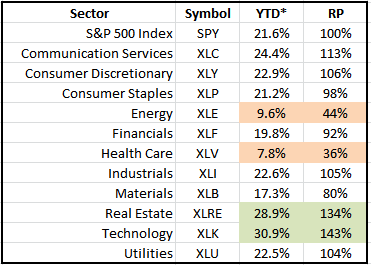 The worst performers were the Health Care Select SPDR Fund (XLV) and the Energy Select Sector SPDR Fund (XLE). In relative terms, both of these sectors delivered less than half the return of the overall index.

Next, let’s look at how this same group of funds has performed over the past 30 days. 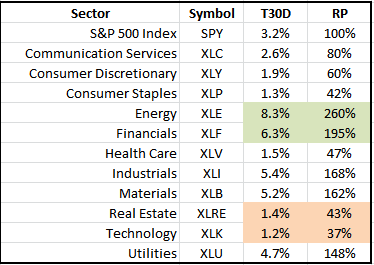 As you can see, a very different picture emerges. By far, the best performing sector groups were energy and the Financial Select Sector SPDR Fund (XLF).

Finally, let’s compare the recent return of each sector to its long-term performance as shown in the table below. 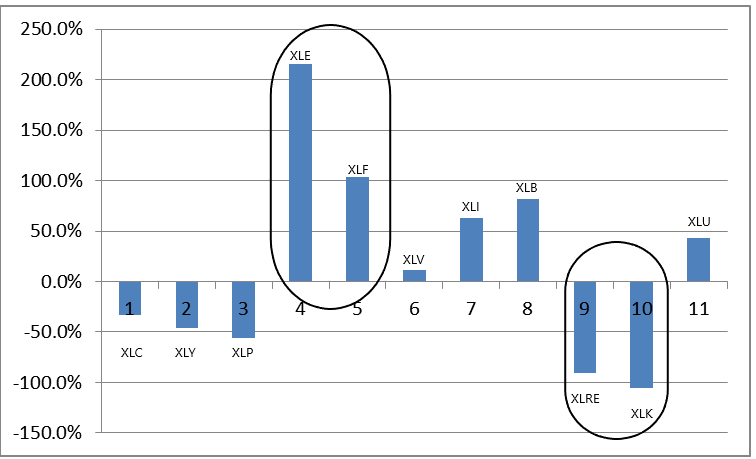 In essence, what we are seeing in this graphic is the potential for “reversion to the mean.” Over time, individual stocks tend to return to their long-term averages. The same principle holds true for sector funds.

However, rarely is an entire sector affected by an exogenous factor to the extent that the entire group does not revert to its long-term average value. The energy sector is most vulnerable to a long-term deviation from its mean. That’s due to the outsized impact the price of oil has on the economic underpinnings of the entire industry.

But other than that, most sectors usually resume their place in the pecking order fairly quickly. For that reason, there are short-term trading opportunities that can be exploited when a sector gets too far from its long-term average.

With the information above, some trading opportunities can be considered. Using the index as our baseline, four sectors stand out as being ripe for reversion to the mean in the near term.

Both the energy (XLE) and financials (XLF) sector funds are more than 100% above their YTD performance averages, while real estate (XLRE) and technology (XLK) are almost equally below their averages.

In the case of the energy sector, we know that a recent attack on Saudi Arabia’s oil facilities is why oil prices have spiked. However, crude oil prices quickly settled back down to the mid-$50s after briefly jumping above $60. So, buying a put option on the XLE might make sense.

There may be even more upside in betting against the financial sector. The Federal Reserve cut interest rates twice this summer, squeezing the yield spread that most banks rely on as their main source of profits. In addition, a decline in consumer spending as a result of import tariffs would also hurt the financial sector.

Conversely, buying call options on the XLRE and XLK has a good chance of paying off over the next 6 – 9 months. In particular, any progress on the U.S.-China trade war should send the tech sector soaring.

But if you aren’t sure how to take advantage of these short-term opportunities, you should tap long-term investment themes with sufficient momentum to withstand geopolitical surprises, monetary policy changes, trade conflict, and economic ups and downs. One such trend currently stands out: the legalization and commercialization of marijuana.

If you’re looking to reap market-crushing gains, tap into our exclusive cannabis trading event. We’ll show you how to make life-changing amounts of money, within a highly lucrative niche of the marijuana market.

Legal cannabis is a game-changer for investors. However, the industry is getting crowded and a shake-out is imminent. You need to pick the right marijuana stocks.

That’s why my colleagues put together a special workshop dedicated to marijuana investing. Click here for full access to our event.