What Matters Most for Stocks? (Hint: Not Impeachment)

Wall Street usually shrugs off the daily give-and-take of politics. You should, too. The performing seals on cable news like to bark and clap their flippers, but their top priority is to entertain the audience. Their goal is ratings, not your edification. You’re wise to keep partisan politics out of your portfolio.

To be sure, high-stakes drama currently dominates the headlines. Unless you live on a remote island without WiFi, you know that House Democrats last week announced the start of an impeachment inquiry into President Trump. Under such fraught conditions, it’s difficult to keep your emotions in check.

The House inquiry was triggered by revelations that Trump pressured the president of Ukraine during a recent phone call to dig up dirt on former Vice President Joe Biden. The incident came to light because of a whistleblower complaint.

The inquiry will almost certainly lead to Trump’s impeachment in the House, although conviction and removal from office by the required super-majority in the GOP-controlled Senate is unlikely.

How has Wall Street taken these political earthquakes? Despite choppy trading, the markets have mostly held firm.

Friday’s close marked the second down week in a row for stocks, but the markets didn’t fall off a cliff. The technology-heavy Nasdaq bore the brunt of the pain, largely because of rising tensions in the U.S.-China trade war. Certain tech sectors such as semiconductors depend on China for a large portion of their revenue. The chart tells the story. 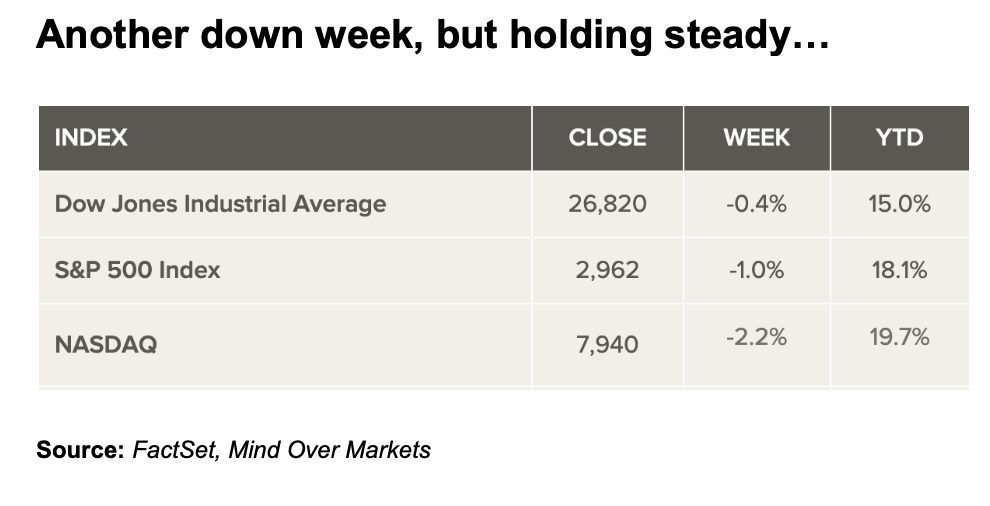 The fundamentals typically transcend political firestorms. Economic growth, corporate earnings and monetary policy matter more than passionate diatribes on Fox News or MSNBC. We may witness temporary market swoons because of new political bombshells, but over the long haul, this bull market will live or die on the hard data.

As of this writing on Monday morning, the three main U.S. stock indices were trading in positive territory, with political and trade fears taking a back seat to economic optimism.

From Nixon to Clinton to Trump…

President Trump last week warned that “markets would crash” if Democrats impeach him. You can relax. There is no basis for this assertion.

Let’s look at the record. Before Trump, our country has grappled with impeachment three times in its history. We’ll set aside the 1868 impeachment and acquittal of President Andrew Johnson, which occurred too far back to provide lessons for modern investors.

In 1974, stocks dropped 10% in the six months following the impeachment announcement against President Nixon. However, the economy already was mired in recession.

During Nixon’s Watergate travails, joblessness was on the rise, the Middle East oil embargo was pushing up energy prices, and the Federal Reserve was tightening.

Fighting the Vietnam War while simultaneously funding the Great Society’s social programs (all without tax increases) had provided stimulus for the go-go economy of the 1960s. But by the time Watergate came along, the stimulus was waning and the economy was finally paying the price. The 1970s downturn would eventually morph into “stagflation,” a period of stagnant economic growth combined with rising inflation.

Nixon’s political woes (he resigned in 1974 rather than face certain impeachment and conviction) had no causal link with the bear stock market of 1973-1974.

Fast forward to President Clinton’s impeachment. In 1998, following the vote in the House for impeachment proceedings against Clinton, the stock market rose 38% over the next six months. The Monica Lewinsky scandal was irrelevant to investors. The economy was strong, the technology sector was booming as the Internet gained traction, unemployment was falling, inflation was moderate, and interest rates were holding steady.

The economic backdrop for Trump’s looming impeachment is mixed. Consumer spending remains healthy, inflation is rising but only modestly, and unemployment is historically low. However, the Sino-American trade war is taking its toll on global economic growth and corporate earnings. Manufacturing activity around the world is declining.

Economic reports scheduled for the week ahead will give us a better picture as to whether stocks will get enough economic juice to break out on the upside (see the following table). 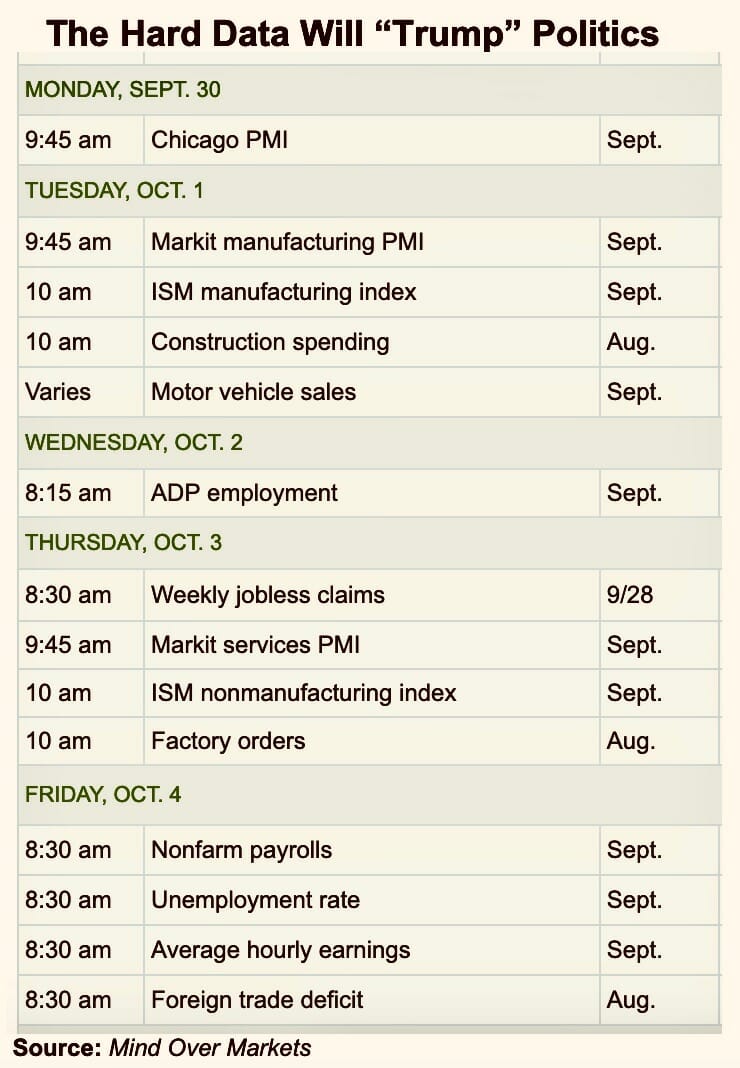 Signs are emerging that a downturn is around the corner. Although the consumer is hanging tough, we’re starting to see anxiety among shoppers and corporate leaders.

The long-running trade war is a major threat to economic growth. Another salvo in the tit-for-tat battle was launched last Friday, when the White House let it be known that it was considering de-listing Chinese stocks from U.S. markets.

In response, Asian stock markets wobbled and China-based companies that trade on U.S. exchanges took it on the chin. The U.S. Treasury Department seemed to back away from the idea on Saturday, saying it had no concrete plans to de-list Chinese companies, but the mere possibility is keeping investors on edge.

The U.S. and China are scheduled to conduct a new round of trade talks on October 10-11 in Washington. Here’s my take: these “talks” will come to nothing. Don’t make any investment moves based on supposed progress (or lack thereof) on trade next month.

Vows from both sides to reach accommodation on trade amount to little more than kabuki theater that’s designed to soothe the nerves of investors and perhaps provide a distraction from impeachment.

Why am I so sure? Consider Chinese history. Politicians should spend less time on Twitter and more time reading history books.

October 1 will mark the 70th anniversary of the founding of the People’s Republic of China. Beijing is planning to throw a prolonged and massive celebration. It’s unrealistic to think that President Xi Jinping, who has endured months of personal invective from the White House, will “blink” under these circumstances and meet America’s trade demands.

The Chinese harbor a sense of victimization because of their long history of exploitation at the hands of Western powers. When Mao Zedong seized power in 1949, Mao declared: “Ours will no longer be a nation subject to insult and humiliation. We have stood up.”

Anyone who expects trade concessions from China in October is deluded. Likewise, with Trump eager to shore up his base ahead of the 2020 election, meeting the Chinese boogeyman half-way would be interpreted by die-hard Trumpers as capitulation. As he faces impeachment, Trump needs his base now more than ever.

How to inoculate your portfolio…

In addition to increasing your exposure to defensive assets (e.g., utilities, real estate and consumer staples), you should also invest your money in long-term trends that will unfold regardless of recession, trade war and the impeachment circus. The legalization and commercialization of marijuana is one such trend. The growth of “canna-business” is virtually unstoppable.

Read This Story: Marijuana: The Rx for Recession Fears

Another mega-trend is the global implementation of 5G, the fifth generation of wireless technology. Companies tapped into 5G will reap a multi-year bonanza that’s immune to headline risk. Learn more about 5G here.

House Speaker Nancy Pelosi has vowed to take an impeachment vote by Thanksgiving. As a seasoned political player, Pelosi wouldn’t have initiated the impeachment process if she wasn’t absolutely sure that she had the necessary votes — and she does.

The impeachment drama will reach a noisy crescendo in coming weeks. So what should you focus on as an investor? Again, let’s hark back to the Bill Clinton era. When asked what mattered most in the upcoming election against George Herbert Walker Bush, Bill Clinton’s campaign strategist James Carville famously uttered three words: “The economy, stupid.”

Despite Bush’s high stature as a statesman due to the victorious Gulf War, the worsening economic recession paved the way for Clinton’s election in 1992. Investors (and President Trump) would do well to heed Carville’s dictum.