The Investor’s Holy Grail: Finding The Next Apple

In the emails that I get from Mind Over Markets readers, I see that many of you remain cheered by President Trump’s pro-business policies. However, with his impeachment on the horizon and a multitude of risks increasing, many of you are also wondering: What’s the next shoe to drop? There’s growing unease among you.

With today’s column, I’ll offer trading guidance that will enable you to not only survive but also thrive amid mounting market dangers. It could even help you find the Holy Grail of investing — i.e., “the next Apple.”

Indeed, Apple (NSDQ: AAPL) was in the news yesterday, as Wall Street officially wrapped up the third quarter. The three main U.S. stock indices closed higher Monday, on optimism over the trade war and economic growth.

The S&P 500 has risen 18.7% so far this year, its strongest performance in the first three quarters of a year since 1997. The third quarter was extremely volatile, but by the time it ended on Monday, the S&P was up 1.2% for the quarter.

U.S. stocks over the past year have been considerably stronger than European and Asian stock indices. Foreign equities have borne a heavier burden from geopolitical risks such as Brexit, while manufacturing activity has markedly contracted in key developed economies such as Germany.

The U.S. tech sector still has some mojo left. Apple jumped 2.4% yesterday, fueled by an increase in its 12-month price target by an analyst at JPMorgan Chase (NYSE: JPM). The new target implies a 20% surge over the next year for the Cupertino consumer giant. Year to date, Apple shares have risen 46.9%, trouncing the broader market. More about Apple in a minute.

From here to eternity…

Trying to process the daily news is downright exhausting. The latest headline-grabbing sensation is the House impeachment inquiry against President Trump, which is gaining steam and rattling markets.

And yet, this bull market just won’t quit, proving the adage that the market climbs a wall of worry. Investors still seem to regard the turmoil in Washington, DC as temporary stumbling blocks rather than lasting impediments. You should keep your sense of perspective, too. The hard data, not rage-tweets and cable news shout-fests, are what matter to your portfolio.

The bull market is in its tenth year, which is perilously long by historical standards. For the last four decades, every bull market has experienced a correction, which is simply a healthy restoration of equilibrium.

With stock valuations now at excessive levels, you should welcome a correction. It’s hard to find value nowadays; a correction would put overpriced stocks back on the bargain shelf. In the meantime, stick to the fundamentals.

Read This Story: What Matters Most for Stocks? (Hint: Not Impeachment)

Albert Einstein said: “Politics is for the present, but an equation is for eternity.” What do the numbers tell investors? Let’s look at corporate earnings. After all, that’s what the stock market comes down to — a collective bet on the future profitability of corporations.

We’re officially in an earnings recession, which is defined as two consecutive quarters of negative earnings growth. The first two quarters of 2019 were in the red. The third quarter isn’t looking much better. 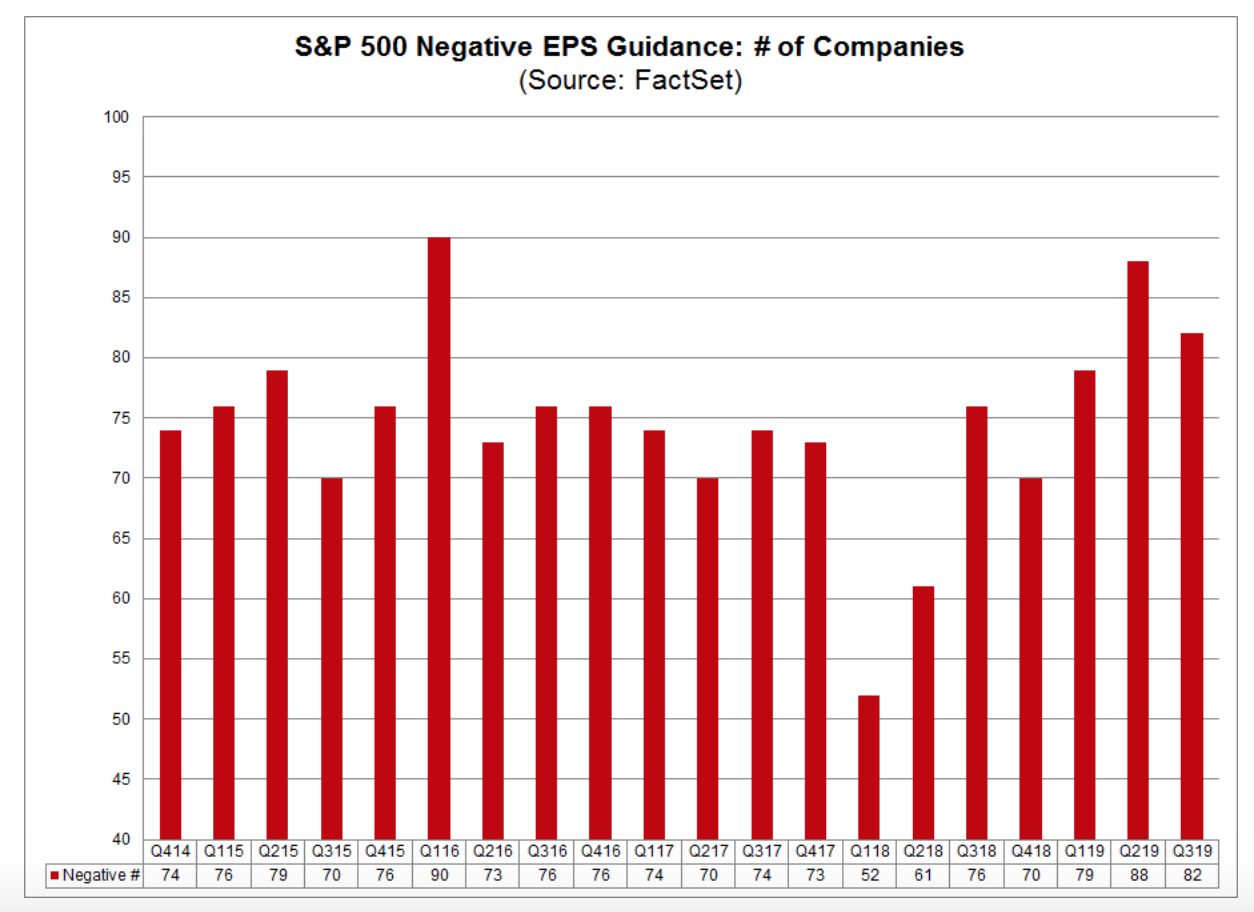 Among the 11 S&P 500 sectors, the worst projected laggard is information technology (IT). Within IT, 29 companies have issued negative EPS guidance for Q3, which is nearly 45% above the 5-year average for the sector of 20.1.

If 29 turns out to be the final number for the quarter, it will mark the highest number of companies issuing negative EPS guidance in this sector since FactSet began tracking this data in 2006.

Tech stocks had been leading the bull market but in recent months, growth stocks have ceded market leadership to defensive sectors and value plays. Certain tech stocks, particularly chipmakers, are vulnerable to the Sino-American trade war, because many of them derive substantial revenue from China.

A dent in the universe…

But as Apple’s recent resurgence shows, you shouldn’t abandon tech stocks altogether — not by a long shot.

Certain tech players are well-positioned to take advantage of trends that will generate profits, regardless of political or trade turmoil. When the markets face uncertainty, that’s the best time to invest your money in the tech “disruptors.”

Disruptive technological change pervades all aspects of our lives. In the business and financial worlds, it separates the winners from the losers.

Case in point: More than 3 billion people now carry smartphones, and each one of these pocket-sized devices packs more computing power than a room-sized supercomputer from the 1980s. Meanwhile, if you’re ever in need of a coin-operated public pay phone, well, good luck finding one.

That’s why one of the best ways to make money over the long haul is to invest in technologically innovative companies that have a head start over rivals in a certain product or service and own proprietary technology that’s upending the status quo.

The late Steve Jobs once said that he wanted to “make a dent in the universe.” The legendary co-founder and former CEO of Apple certainly left a mark on human society, by creating astonishing products that transformed our lives. In the process, he helped make a lot of people rich.

Apple is the quintessential capitalist success story. It’s among the most prominently covered stocks in the financial media and represents one of the “As” in the much-discussed quintet of FAANG technology stocks.

Founded in 1976, Apple started as a tiny firm — the proverbial garage start-up. Apple went public in 1980 and today it’s one of the world’s most valuable public companies, with a market cap of more than $1 trillion. A technology sector bellwether, Apple is a staple in many retirement portfolios.

One of the surest ways to build wealth is to pinpoint companies that are pursuing the same goal as Steve Jobs: making a dent in the universe. Maybe you think it’s too late to become a millionaire by investing in the market disruptors. But the fact is, technological innovation never sleeps and new bargains in fast-emerging tech niches always come along. You just need to know where to look.

One trend that fits the bill is the global roll-out of 5G wireless technology. The implementation of ultra-fast 5G will expedite the Internet of Things and help revolutionize the daily realities of people and businesses.

The telecoms, equipment providers, and chipmakers involved in 5G should enjoy greatly enhanced profitability, even as the broader markets wobble. You don’t have to abandon your love affair with tech stocks; you simply need to get more selective. We’ve done the homework for you. Click here for our latest report on 5G.