Aerospace/Defense: A Parade of Profits

Since Ike coined that term during his farewell address in 1960, the military-industrial complex has ballooned to mind-boggling proportions that would have made him blanch. And let’s not forget, Ike was not only Commander-in-Chief but also a five-star general who supervised D-Day in World War II.

If you’re looking for an investment theme with unstoppable momentum, it’s rising military expenditures around the world.

Don’t get me wrong. War is a horrible thing. We should pray that one day, all countries beat their swords into plowshares. But if history is any guide, wars will continue to happen. And that’s why aerospace/defense is one of the most enduring investment themes you can find.

For confirmation of aerospace/defense as a relentless source of growth, look no further than the celebrations this week in Beijing. America’s great rival for global hegemony is throwing itself a big birthday bash.

October 1 marked the 70th anniversary of the founding the People’s Republic of China. Among the stunning pageantry on display this week in Beijing was a massive military parade Tuesday in Tiananmen Square.

Violent street protests in Hong Kong yesterday cast a shadow over the anniversary celebrations, but China is nonetheless showing off its latest technological innovations in military might. In front of a slew of Chinese leaders and foreign dignitaries, more than 15,000 soldiers marched in the parade, accompanied by tanks, fighter jets, nuclear-tipped ballistic missiles, artillery pieces, and a wide array of ultra-sophisticated weapons systems.

China in recent years has vastly boosted its defense spending. The U.S. still comes in at number one in defense outlays, reaching $649 billion last year. China came in second at $250 billion. However, between 2009 and 2018, China posted defense spending growth of 83%, the highest rate of any country in the world. (see chart). 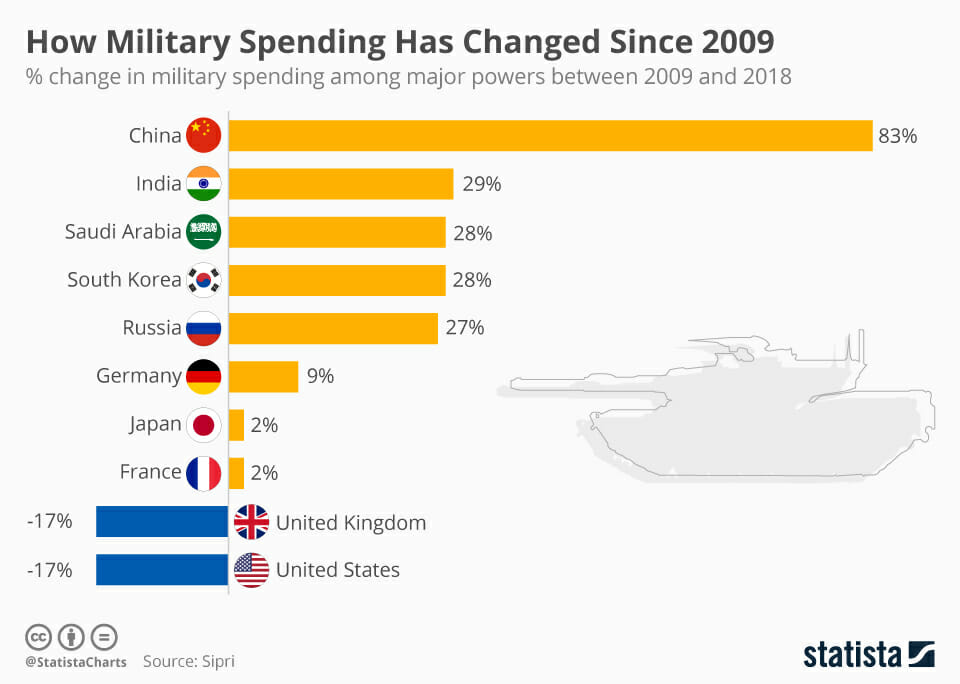 China’s public flexing of military might this week in central Beijing highlights defense spending as an investment theme that will unfold regardless of economic cycles. This trend is immune from even the Sino-American trade war. In fact, while geopolitical risk hurts many other asset classes, it actually helps the defense industry.

To be sure, as the above chart shows, defense spending in the U.S. declined between 2009-2018. However, that trend prompted the Trump administration to greatly increase Pentagon funding once it got into office.

President Trump signed a $1.3 trillion spending bill in 2018 that included a $160 billion boost in defense spending over two years.

Lined up for steady growth… 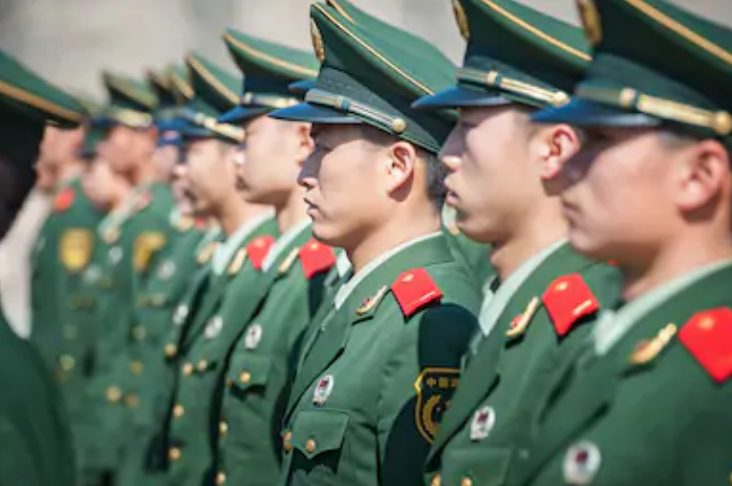 So you thought the collapse of the Soviet Union in 1991 would usher in a new era of peace and harmony? Sorry to disappoint you. In 2018, global defense spending reached its highest level since the Cold War.

Military research firm IHS Jane’s estimates that worldwide defense spending in 2018 came in at $1.67 trillion, exceeding the previous post–Cold War record of $1.63 trillion that was set in 2010. The $1.67 trillion represents a 3.3% increase over 2017 levels, the highest year-over-year growth in more than a decade (see chart below). 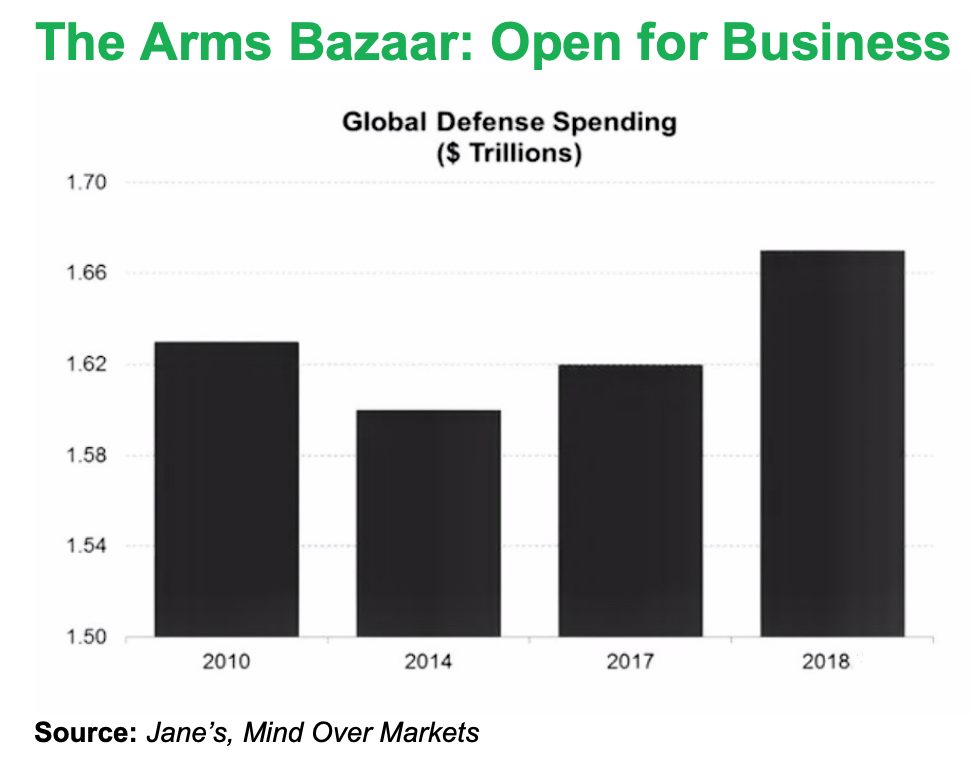 As an investment analyst, I cover all sectors and asset classes, but my specialty is aerospace/defense. In my youth, as the editor of a publication devoted to rotorcraft, I flew military helicopters and got to know a lot of military officers and corporate CEOs in the sector. My experience over the decades tells me that military needs are resistant to economic cycles. Pentagon officials will never have to rattle a tin cup for funding.

Whether this defense spending is efficient, effective or even moral does not fall under the purview of this column. As investors, we must take the world not as we want it to be, but as it is. Some investors refuse to put money into, say, tobacco stocks. So let your conscience be your guide.

But if you’re looking for market-beating growth, consider this: As of Tuesday’s market close, the benchmark iShares US Aerospace & Defense ETF (ITA) has generated a year-to-date total return of 31.1%, compared to 19.8 % for the SPDR S&P 500 ETF (SPY).

The stock market is poised for a fall. The recovery is due for a recession. You can play defense… with defense.

Sure, most analysts predicted a correction in the third quarter and it didn’t happen. Not yet, anyway. The S&P 500 closed out Q3 with a gain of 1.2%, but the fourth quarter yesterday posted an inauspicious start, with the three main U.S. stock indices closing substantially lower.

Markets opened higher Tuesday but abruptly reversed direction and fell deeply into the red in the wake of a bleak report on U.S. factory activity. The ISM manufacturing index dropped to 47.8 in September, missing the consensus forecast of 50.1. A reading above 50 marks growth; yesterday’s report reflected the worst reading since June 2009, the final month of the Great Recession.

Corrections wreak havoc on your portfolio, whether they’re delayed or not. With increasing signs of recession, rising tensions in the Middle East, and the long-running U.S.-China trade war, you need to pinpoint trends that are resistant to these risks. Defense spending actually thrives on them.

However, you shouldn’t pile into aerospace/defense indiscriminately. Many investors have assumed that military contractors as a whole are great “Trump plays” but you should focus on the fundamentals and inherent strengths of each stock.

As with any trend, aerospace/defense expansion will have its winners and losers. As investors focus on the leading mega-cap names in the sector, don’t ignore the smaller innovators that are setting the stage for multiyear growth.

The blue-chip industry leaders already have enjoyed a big run-up in share prices; bargains are hard to find. That’s why you should focus on the smaller-cap specialty companies that make the complex avionics, communications, electronics, and testing systems that the “big boys” can’t live without.

These pick-and-shovel plays fly under the radar, so to speak. They’re producing the breakthrough technologies for guidance systems, cockpit displays, pilot-less drones, hypersonic cruise missiles, and a host of technologies that are transforming the 21st century battlefield.

Along those lines, a technological niche with huge implications for national security is the global implementation of 5G, the “fifth generation” of wireless technology. Super-fast 5G provides the backbone for the Internet of Things.

Military 5G mobile networking capabilities will exert a huge influence on defense communications. The country that dominates 5G will obtain an edge in military competitiveness, which is why the Chinese government is subsidizing 5G development. Uncle Sam is leaving 5G to the private sector. The race is on.

The opportunities for investors in 5G wireless networks are enormous. That’s why our team of strategists recently put together a special report on 5G investment plays. Click here for our 5G presentation.

John Persinos is the managing editor of Investing Daily. He also serves as an analyst with the aerospace/defense consulting firm the Teal Group. You can reach him at: mailbag@investingdaily.com