The Next Big Thing: Hiding in Plain Sight

Through the end of September, the S&P 500 Index was up almost 19% in 2019. That’s the index’s best nine-month start to a year since Bill Clinton occupied the White House. Yes, the job market is strong and consumers are still spending.

But other than that, there isn’t much in the way of hard data to justify higher equity values. If anything, the facts suggest a flat stock market at best.

It is widely believed that the stock market is a leading indicator of future economic growth. If so, then something’s wrong. According to the Federal Reserve, gross domestic product (GDP) is expected to grow by only 2% next year.

That’s better than no growth at all. But it’s highly discordant with the stock market’s rapid rise over the past three quarters. If the Fed is correct, a stock market correction within the next 12 months would seem all but assured.

But what if the stock market is trying to tell us something else? Maybe there is a new wave of economic growth around the corner, but we can’t quite see it yet.

By the end of this year, there will be more millennials than baby boomers. This changing of the guard brings with it enormous societal and economic implications. The first generation raised in the age of the Internet is now the largest consumer segment in the United States.

As a parent of two millennials, I know this much. They are constantly connected to the Internet, and they value convenience. And for that, they (and the rest of their cohort) will need 5G technology.

Also Read: 5G: The Fight for the Future

When a new technology is rapidly evolving, it can be difficult to predict which company in that sector will emerge as the ultimate winner. For example, Apple (NSDQ: AAPL) is now the dominant player in the smartphone market even though Blackberry (NYSE: BB) pioneered that technology. 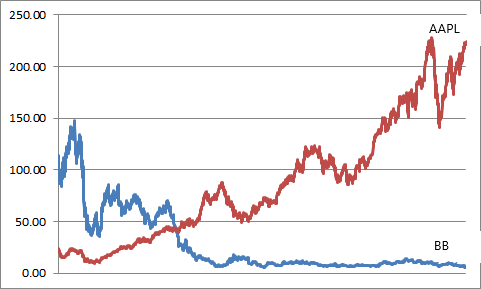 Had you bought stock only in Blackberry (formerly Research in Motion) in 2008 when it was trading near $150, you would have lost 97% of your money by now. However, had you bought AAPL it would now be worth roughly 20 times what you paid for it!

For that reason, sometimes the smartest move you can make is to invest in the top two market leaders to double your odds of success. When it comes to investing in 5G stocks, we believe owning both AT&T (NYSE: T) and Verizon (NYSE: VZ) is the safest way to assure yourself of participating in the enormous growth of that market.

To be clear, we don’t expect either one of these stocks to increase 20 times in value over the next 10 years. On the other hand, it is highly unlikely either stock will lose 97% of its value over the next decade, either. Instead, we believe the domestic data transmission segment of the 5G market will become an oligopoly dominated roughly equally by AT&T and Verizon.

The 5G Is Free

Of course, AT&T and Verizon are among the more obvious 5G plays in the market today. In theory, that means the potential lift from their 5G businesses should already be priced into their share prices.

If so, then it appears Wall Street has low expectations for these two companies. Verizon is priced at 12 times forward earnings compared to a multiple of nearly 18 for the S&P 500 Index. AT&T is even cheaper, trading at only 10 times next year’s profits.

At a recent share price of $60, Verizon has gained no ground over the past 12 months. That’s equal to the performance of the S&P 500 Index. However, the vast majority of its constituents will derive considerably less direct benefit from 5G commerce than should Verizon.

AT&T is up 10% from where it was a year ago but has gained no ground over the past two years. That means you can buy AT&T (and its 5.4% dividend yield) at the same price it was trading at before anyone started getting serious about the 5G market.

The upshot: You can buy stock in these two companies today and pay almost no premium for their future 5G profits. Keep in mind, that’s a market that is projected to grow at a compound annual growth rate of nearly 50% over the next six years!

Regardless of how accurate that prediction turns out to be, I don’t see much downside in buying either one of these stocks. If nothing else, they should continue to pay out huge dividends even if their share prices don’t appreciate much.

As I’ve just explained, the opportunities for investors in 5G wireless networks are enormous. That’s why our team of strategists recently put together a special report on 5G investment plays. Click here for our 5G presentation.