My daughter Jennifer is now married with kids of her own. But when she was a pre-teen and we lived in Massachusetts, she regularly dragged me onto a vintage roller coaster at a local amusement park. Built in 1930, this “thrill ride” was a rickety wooden contraption called The Yankee Cannonball. Jen loved it. I hated it.

I’ve been thinking of the Yankee Cannonball lately, as I watch stocks embark on gut-wrenching twists and turns. High volatility is paradise for options traders, but unnerving for almost everyone else. Below, I’ll show you a few ways to keep your portfolio on a steady course amid the market’s sharp ups and downs.

The month of October already has a bad reputation on Wall Street, because it has heralded the historic market crashes of 1929, 1987 and 2008. The facts tell us that over the long term, October’s performance has been about average. However, analysts can be a superstitious bunch and they’re on edge right now.

October this year certainly got off to a bumpy start. U.S. stocks declined for the second consecutive week with mixed economic data as the backdrop. Trading was choppy.

Jobs data was positive but the Purchasing Managers’ Index showed that manufacturing activity in the U.S. contracted in September for the second month in a row. The services index also declined, although it officially remained in expansion mode.

Factories are sputtering but the employment report for last month showed that the labor markets remain tight, with the headline unemployment rate actually dropping to 3.5% — the lowest since 1969. The good news/bad news economic scenario whipsawed investors with wild intraday swings.

This mixed picture boosts the odds of continued volatility. It’s also more likely that the Federal Reserve will cut rates before the year is out, although the central bank has signaled that it won’t acquiesce to President Trump’s emphatic demand for interest rate levels of zero or below.

By last Friday’s close, the Dow Jones Industrial Average and the S&P 500 index were down for the week. The tech-heavy Nasdaq eked out a gain. There were lots of twists and turns along the way (see table).

As of this writing on Monday morning, all three main indices were poised to open lower, in pre-market trading. A major reason is that over the weekend, Chinese officials indicated that they’re hesitant to make a trade deal with President Trump.

The White House is starting to suspect, probably correctly, that the Chinese are patiently waiting for better negotiating conditions under a new president. If the Chinese are stalling, the strategy makes increasing sense as Trump’s political survival gets shakier.

To be sure, the long-running trade war and Trump’s likely impeachment in the Democratic House are spooking investors, but it’s the hard economic data that should matter most to investors.

It was a positive jobs report last week that dampened anxieties and triggered a bounce back in equities. Pivotal reports scheduled for this week have the potential to similarly move markets (see table). 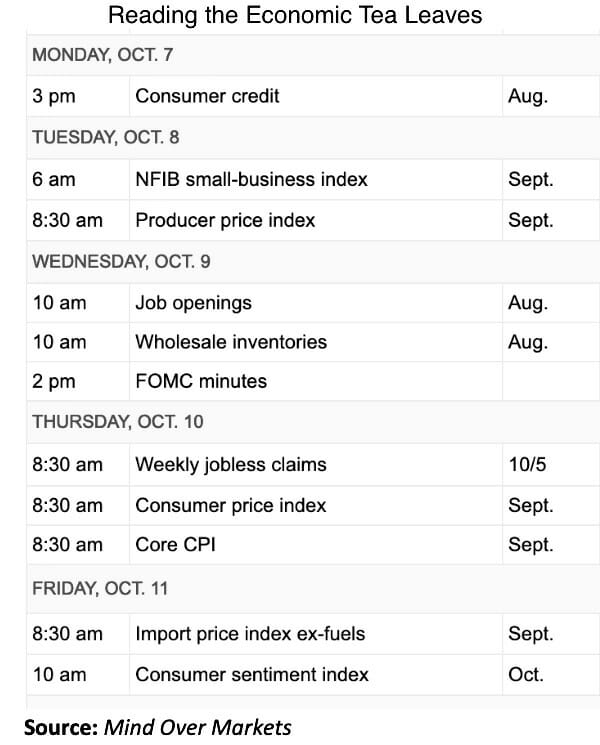 The crucial Producer Price and Consumer inflation reports are due on Tuesday and Thursday, respectively. The numbers could exert a huge influence on Fed policy in the coming weeks.

The White House plans to raise tariffs to 30% from 25% on $250 billion worth of Chinese goods on October 15. But it’s not just China. The Trump administration also implemented tariffs on $7.5 billion in European goods that will take effect October 18.

This Thursday and Friday, senior Chinese trade delegates will be in Washington, DC (yet again) for their 13th round of negotiations over the trade war. I don’t expect a deal. Neither Trump nor Chinese President Xi Jinping can afford to look weak with their domestic constituencies.

It’s possible, though, that the U.S. will announce a postponement of the next round of tariff increases scheduled to take effect October 15. That modest move would be bullish for stocks, at least temporarily.

There’s a lot of theater surrounding the on-again, off-again Sino-American trade war. For theater of the absurd, turn to Britain.

“Brexit” is a hot mess and unlikely to get resolved before the UK’s deadline to exit the European Union by October 31.

Tory Prime Minister Boris Johnson, often referred to as the “British Trump,” is a confrontational populist who has vowed to crash the country out of the EU, with or without a plan. Parliamentary debate over Brexit has often lapsed into colorful insults. (My personal favorite, recently uttered by the House speaker: “I couldn’t give a flying flamingo what your view is.”)

EU officials last weekend rejected a new package of Brexit proposals from the British government, placing the blame squarely at Johnson’s feet. As the two sides bicker in their attempts to hammer out a plan, a summit of EU countries is scheduled for October 17-18. The confab promises to be contentious.

The ramifications of a “no deal” Brexit are expected to be disastrous for the British economy, with ruinous effects that cascade throughout the global economy.

To prepare for the prolonged volatility ahead, you should pare back your growth stock holdings and elevate cash levels. Pocket at least partial gains from your biggest winners, as the market leaders of this bull market become the laggards.

Over the past several months, as the tit-for-tat tariff spat heats up, certain defensive sectors—notably utilities and real estate—have outperformed the S&P 500. Sectors vulnerable to trade sanctions, such as industrials, have underperformed. As the trade war drags on, export-dependent companies with greater overseas exposure will continue to get hit the worst.

Utility stocks are appealing now. Protected from competitors, utilities can become entrenched as a dominant economic force in an entire community. Everyone needs heat and power, regardless of economic cycles. That helps make utilities recession-resistant.

For many mega-cap Silicon Valley companies, China is hugely important as a consumer market and source of components. However, utilities are buffers against the global trade war, because they derive zero revenue from China.

Periodic panics in the markets are inevitable, especially amid today’s economic and political volatility. In the next global contagion, several overvalued Wall Street darlings will likely collapse.

Buckle up and get defensive. October’s thrill ride is just getting started.