I SPY a Trading Opportunity

Last fall was a particularly volatile period for the stock market. For several weeks, stocks took a series of quick dives followed by short-lived rallies.

Eventually, the pressure became too much. The stock market finally gave way in December, resulting in a 14% decline during the fourth quarter.

There is no way of knowing if the same thing will happen this year. But if it does, we do have a clue as to exactly when it may happen. And that could prove quite valuable if you’re trying to trade the market using index funds.

In October and November last year, the SPDR S&P 500 ETF (SPY) fell by more than 7% during the three trading days following the options expiration date in each month. That means those six days accounted for nearly half of the stock market’s net decline during the fourth quarter of 2018 as shown in the chart below. 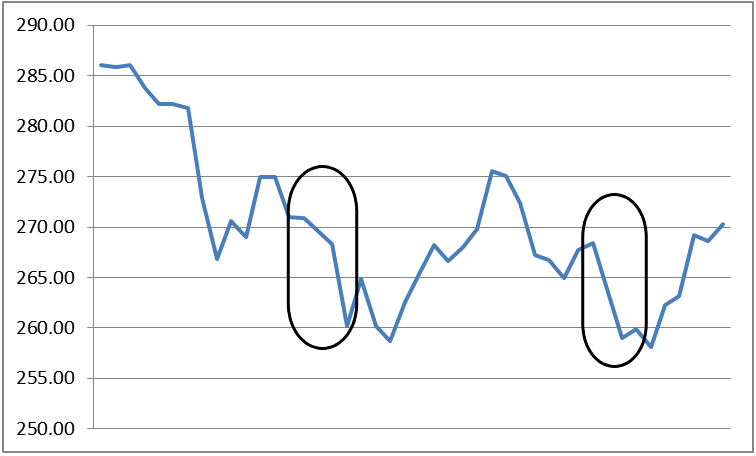 A statistician might say that the timing of those two declines was random, but I think otherwise. A lot of institutional money managers trade options on the SPY to manage risk.

In fact, that is the basis for the CBOE Volatility Index (VIX), or “fear index.” The VIX measures the ratio of short-term put option contracts on the SPY to call options.

When the VIX increases in value, that means more people are buying put options on the SPY to protect against a loss. If the stock market tanks, the profit in the put options can offset some or all of the loss in the stock portfolio.

If you are an options index trader, here is where things get interesting. During those same two three-day periods last October and November, the VIX increased by 27% and 15% as shown below. 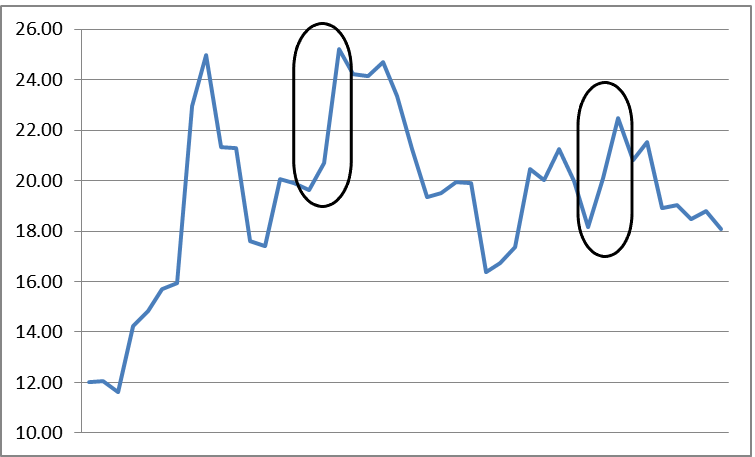 In theory, increased trading activity in index options should have no direct impact on the value of the index. Just because more people are afraid the stock market may crash doesn’t mean that it will.

In fact, by using options to guard against a crash, they don’t have to sell their stocks. If anything, that should alleviate downward pressure on the stock market.

However, as any experienced trader will tell you, there is a self-fulfilling nature to the stock market. Part of that is psychological. If enough people act on their fears by selling stocks, the market will go down.

The opposite also is true. As we have witnessed this year, the stock market can go up on optimism even if the underlying fundamentals are deteriorating.

In addition to market psychology, there are trading strategies that link a wide variety of investment products to one another. In some cases, a big rise (or drop) in stocks can trigger an equally strong move in bonds, currencies, commodities and their corresponding options contracts.

I believe the increased trading activity in put options on the SPY last fall contributed to the stock market’s decline late last year. If so, will something similar occur this year?

This month, the options expiration date is October 18. If last year’s pattern carries over to this year, the week of October 21-25 could be particularly volatile.

November 15 is next month’s options expiration date, so November 18-22 could also be more volatile than usual.

If you are not an options index trader, there isn’t much you can do about it. Sit back and enjoy the show!

If you really want to be daring, you can trade weekly options on the SPY or the VIX that expire on October 23. That is one week after the monthly options expire.

For example, on October 7 the SPY was valued near $295. At that time, a put option that expires on October 23 with a strike price of $295 could be purchased for $4.

If the SPY drops below $291 by October 23, these put options would be “in the money,” meaning you would make a profit. For that to happen, the SPY would have to decline by roughly 1.4%.

If the stock market repeats last year’s pattern, you could triple your money before the end of this month using this simple strategy.

Of course, it’s possible that the SPY may not decline at all. In that case, you’d lose all of your initial investment. That may be more risk than you’re willing to take.

If you are looking for a trading strategy that works in all types of stock market environments, considering following the advice of my colleague, Jim Fink. As chief investment strategist of Options for Income, Jim has been using seasonality to trade options very successfully.

In fact, Jim has developed a “profit calendar” trading system that allows you to collect payments every Thursday, similar to a paycheck.

It’s like getting an extra paycheck, week in and week out. The gain is so reliable, you can schedule it on your calendar. Jim made himself a wealthy man with his system. Now he wants to share his secrets with our readers.

How does Jim Fink do it? Click here for his presentation.