In 1961, the chairman of the Federal Communications Commission, Newton Minow, stunned Americans by declaring commercial television programming to be a “vast wasteland.”

Minow’s observation occurred to me today, as I sipped my morning coffee and flipped through the financial news channels. Nothing has changed in the 58 years since Minow uttered those famous words.

This morning (against my better judgment) I decided to see what the talking heads on cable TV had to say about current trade talks. My worst suspicions were confirmed. I was subjected to a torrent of government disinformation and ignorant punditry.

High-level Chinese trade negotiators are preparing to meet with their U.S. counterparts in Washington, DC from October 10-11, which means the Sino-American trade war is dominating the headlines. Deputy-level meetings already occurred in Washington yesterday, with no progress.

Now’s a good time to debunk the most common myths about the long-running trade war. Consider today’s Mind Over Markets column as a public service for investors.

Myth #1: Tariffs motivate companies to return to the U.S.

Fact: Most corporations can’t afford to relocate their factories and supply chains to the higher-cost United States. Also keep in mind, tariffs don’t magically create new demand for certain products (e.g., U.S.-made steel) when demand was weak to begin with.

Data reveal that when companies leave China, they’re relocating to even cheaper countries such as Vietnam, India, Pakistan, or Bangladesh. They’re shunning the U.S., where wages, operating overhead, environmental rules, and worker expectations are higher.

Read This Story: U.S. vs China: Battle of the Century

President Trump’s “America First” policy could result in America Last, with dire consequences for many of the multinational blue chips commonly found in retirement portfolios.

Myth #2: American farmers will be the big winners.

President Trump tweeted in May: “Our great Patriot Farmers will be one of the biggest beneficiaries” of the trade war with China. Putting aside the tweet’s Stalinist tone, it’s simply not true.

It’s not just corporations that are hurting from the trade war. China has responded to tariffs by shifting its acquisition of key agricultural commodities, notably soybeans, from America to alternate sources such as Russia.

Yep, so far, there’s only one winner from this trade war, and it’s Russia.

The big loser? It’s not China. It’s the U.S. Farm Belt, which is part of President Trump’s political base. Farm loan delinquencies and bankruptcies in the U.S. are at six-year highs.

China is the world’s biggest soybean importer, but it’s now subsidizing a big increase in the country’s domestic production of soybeans, in addition to buying this vital foodstuff from countries such as Russia. That leaves farmers in the American heartland out of luck.

President Trump on May 5 posted these two successive tweets:

For 10 months, China has been paying Tariffs to the USA of 25% on 50 Billion Dollars of High Tech, and 10% on 200 Billion Dollars of other goods. These payments are partially responsible for our great economic results. The 10% will go up to 25% on Friday. 325 Billions Dollars….

….of additional goods sent to us by China remain untaxed, but will be shortly, at a rate of 25%. The Tariffs paid to the USA have had little impact on product cost, mostly borne by China. The Trade Deal with China continues, but too slowly, as they attempt to renegotiate. No!

Tariffs are paid by companies (or their intermediaries) to the customs authority of the country imposing the tariff.

Tariffs on imports coming into the United States, for example, are collected by Customs and Border Protection, acting on behalf of the Commerce Department.

Companies usually pass along the added costs to consumers, which makes tariffs a form of taxation. Tariffs have been pushing up costs and they’re actually dampening, not fueling, U.S. economic performance.

Anyone who says tariffs are necessary because of the trade deficit simply doesn’t understand trade, or is being purposely dishonest.

It should dismay you to learn that the United States is now the second most protectionist country in the world. In tariff-fueled 2019, the U.S. application of tariffs has gone from under 2% on all products imported into the country to 7.5% (see chart). 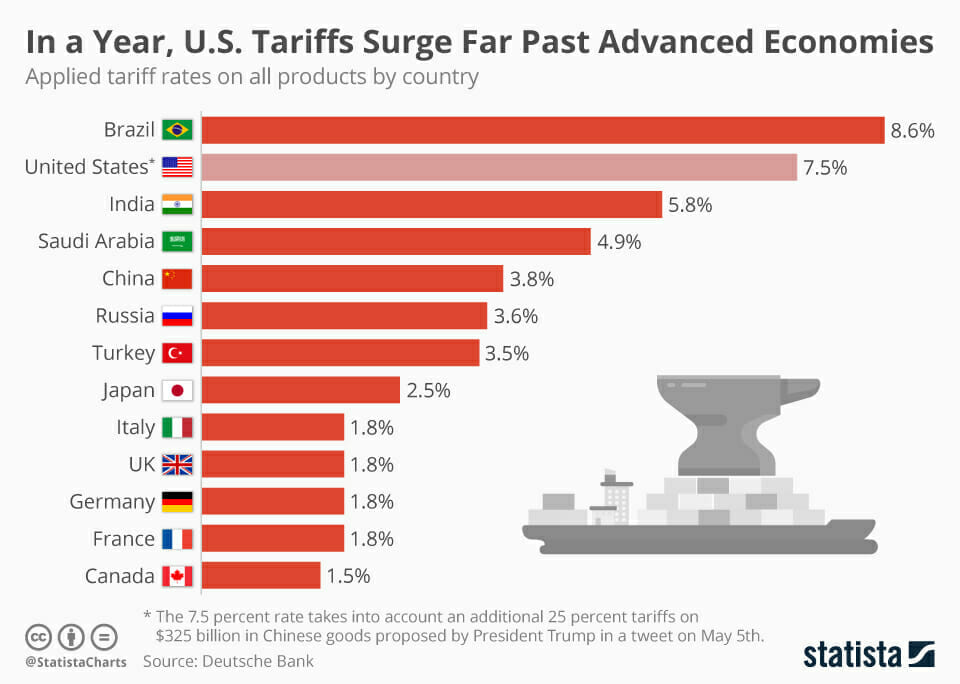 How to Position Your Portfolio Now

The stock market has gotten off to a rocky start this month.

Read This Story: October’s Thrill Ride Is Just Getting Started

Because of the conditions and trends that I’ve just laid out for you, further sell-offs probably lie ahead. I advise these specific steps for investors:

Trump has concluded that the trade war is a political winner with his base. By the same token, Chinese President Xi Jinping can’t afford to appear weak to the public and his colleagues in the party leadership.

If a pseudo-expert in the media tells you that trade war resolution is near… well, don’t believe it. You should expect trade-induced volatility to continue into next year, if not beyond.

Editor’s Note: I’ve tried to shed some honest and objective light on the long-running trade war. A key battlefield in the escalating Sino-American rivalry is 5G, the fifth generation of wireless technology that will revolutionize our daily lives.

With 5G, trillions of dollars and the control of the future are at stake. We’ve put together a new report on specific investment opportunities in 5G. Click here for the full presentation.