I was watching a DVD of Peanuts with my toddler grandsons last weekend when we got to the famous bit about Lucy repeatedly snatching the football away from Charlie Brown. She promises to hold it steady on the ground, he runs to kick the ball, she snatches it away at the last moment, he trips and wipes out. The pattern repeats.

I think of that scene, whenever Washington and Beijing dash the unrealistic hopes of investors for a trade deal. Wall Street yesterday was riding high on promises of trade progress but stocks fell to earth when trade peace was suddenly snatched away. It’s been a recurring pattern all year.

Sometimes the investment herd behaves in such a cartoonish manner, you can only shake your head. The Sino-American trade war is a prime example. The fluctuating fortunes of trade negotiations are whipsawing investors.

The three main stock indices closed deeply in the red Tuesday, after optimism over a trade deal was shot down.

As of this writing on Wednesday morning, the three indices were trading in the green, on cautious optimism ahead of a planned speech today by Federal Reserve Chair Jerome Powell. If Powell signals that another interest rate cut isn’t off the table, stocks could surge.

But the biggest concern remains trade policy. Ever since the Trump administration launched the U.S.-China trade war in January 2018 with tariffs on solar panels and washing machines, I’ve been warning you to reduce your exposure to companies most affected by the trade war, such as export-dependent manufacturers. Indeed, these stocks have been under the worst pressure. The pain won’t end anytime soon.

The Continuing Adventures of Tariff Man…

Donald Trump views China as a serious violator of trade rules and he has surrounded himself with protectionists who feel the same. Trump in a recent tweet even called himself “a Tariff Man” (which of course gave birth to an Internet meme).

To be sure, China is guilty of flouting trade rules, but Trump has another agenda besides getting China to act more responsibly. His political base gets fired up when the president bashes “Gina.” Consequently, don’t expect any resolution to the trade conflict until after the 2020 election.

Likewise, Chinese President Xi Jinping is grappling with a slowing economy and other domestic pressures, such as worsening protests in Hong Kong. Xi is in no position to make trade compromises that might be construed by his citizenry and colleagues as weakness. What’s more, the U.S. is losing trade leverage, as President Trump’s impeachment looms and his poll numbers sink.

Sure enough, the escalation of trade tensions was the culprit for Tuesday’s stock market swoon. U.S. stocks headed south after the White House expanded its list of blacklisted Chinese firms, throwing a monkey wrench in U.S.-China trade negotiations this week in Washington.

The U.S. Commerce Department on Monday added 28 Chinese companies to an export blacklist, because of their role in Beijing’s repression of Muslim minorities in the country. The action prevents the firms from buying components from U.S. companies without U.S. government approval, a potentially crippling restriction.

The stakes of this blacklist are particularly high because some of the designated companies are strategically important high-tech companies involved in artificial intelligence, facial recognition, data recovery, and surveillance. China’s response was resolute, with Beijing insisting that the U.S. stay out of its internal affairs.

In my mind, this pattern in the stock market begs the question: are certain insiders profiting from advance knowledge of trade announcements?

For example, if you knew ahead of time that the Commerce Department would make that statement on Monday about a Chinese blacklist, you could have made a killing from the predictable plunge in share prices. If you think the swamp creatures in Washington aren’t capable of such brazen corruption, regardless of political party, you’re not paying attention.

Unpredictable trade policy is hurting the economy. Goldman Sachs (NYSE: GS) recently asserted that the U.S.-China trade war is increasing the risk that a recession will occur before next year’s presidential election.

We’re already witnessing a pronounced slowdown in manufacturing activity in the U.S. and around the world. For specific trading advice in this environment, read my story: Late-Cycle Investing (Before It’s Too Late)

According to research firm Statista, the gap between imports to and exports from the U.S. climbed to a 10-year high in the first half of 2019. This widening of the trade deficit occurred, despite this year’s flurry of tariffs. Meanwhile, imports from China dropped by more than $30 billion (see chart). 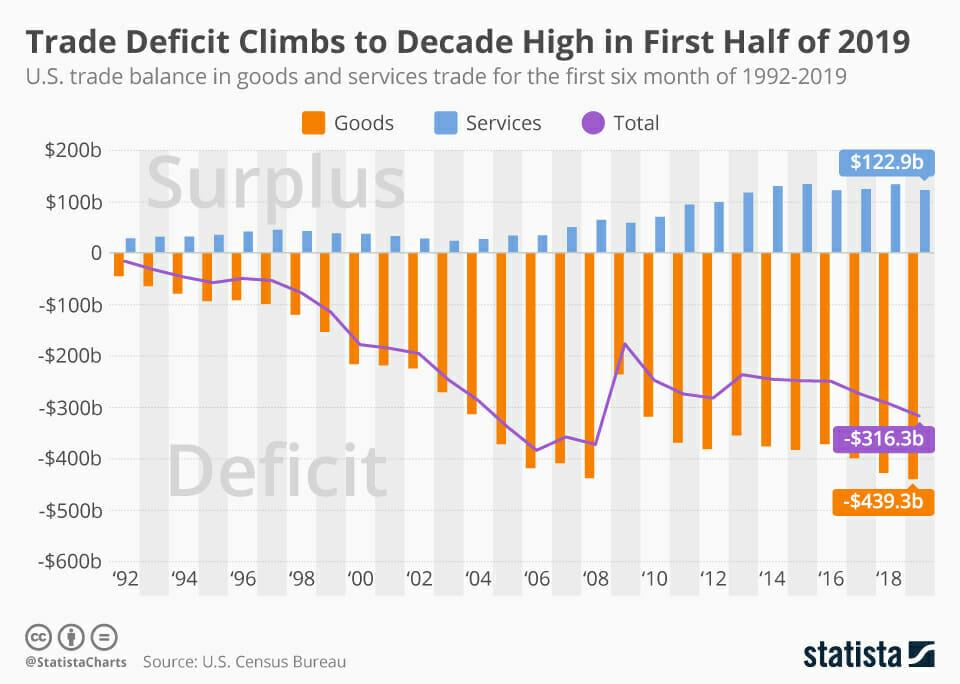 One way to beat trade war fears is to invest in an investment theme that will thrive, regardless of trade policy or economic cycles. One such theme is the global implementation of ultra-fast 5G (“fifth generation”) wireless networks.

We’ve put together a new report on specific investment opportunities in 5G technology. Click here for the full presentation.

Meanwhile, Europe also has been a source of investor anxiety. The head of the European Parliament said on Tuesday after meeting British Prime Minister Boris Johnson that “there has been no progress” in Brexit talks.

Collectively, the EU is the world’s second-largest economy, in nominal terms, after the United States. In addition to tariff relief, the EU allows free movement among its 28 member countries for employment and commerce.

Plan or no plan, the UK must depart the EU by October 31, more than three years after the country voted in a referendum to end its five-decade membership of the bloc.

The two sides are farther apart than ever and compromise appears highly unlikely. If Britain exits the EU without a plan that’s acceptable to EU leaders—aka “hard” Brexit—the projected consequences are dire for the British economy and by extension the EU. Experts predict horrendous bottlenecks at borders, shortages of food and essential medicines, a sharp blow to economic activity, and perhaps even civil unrest.

Trying to time a recession is foolhardy, but one is probably coming within the next 12-18 months. When the downturn finally hits, many overvalued stocks will fall hard. Stay cautious.