Bed Bath & Beyond: The Next Target? 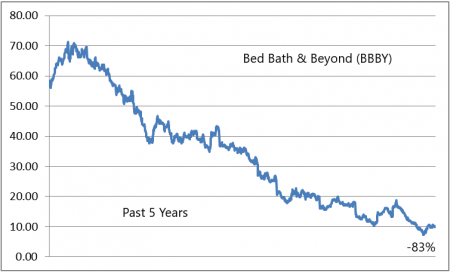 That news came as relief to the company’s weary shareholders. Over the past five years, BBBY has lost more than 80% of its value.

That huge drop was primarily due to concerns that Amazon.com (NSDQ: AMZN) would eventually drive Bed Bath & Beyond out of business. It’s easy to see why. Most of the goods sold by the company can more easily be bought online.

I confess that I do not often venture into a Bed Bath & Beyond store. The dizzying array of eclectic merchandise stacked floor-to-ceiling is a bit overwhelming.

I suspect a lot of other shoppers feel the same way, too. That’s why hiring Target’s chief merchandising officer makes a lot of sense.

If he can do for Bed Bath & Beyond what he did for Target, the company may be able to reverse its recent misfortunes. But he’ll need to act fast, so we should know by the end of next year if he can pull it off.

In a moment, I’ll show you how you may be able to profit from this unexpected turn of events. But first, a little history is in order.

Until the beginning of this year, shares of Target had been flat for the previous four years. It too was regarded as Amazon roadkill, until recent results proved otherwise. 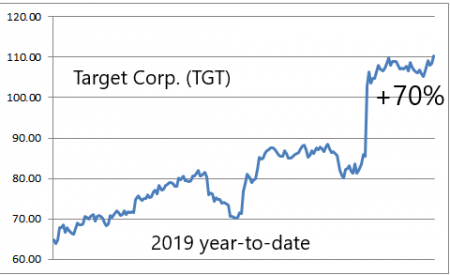 This year, TGT is up 70% on the strength of much stronger than expected quarterly financial results.

Instead of losing ground to Amazon, Target was able to grow its online sales by 42% during the first quarter of this year. Much of that growth is credited to Target’s decision to offer same-day pickup at its store locations.

And that’s where Target, as well as Bed Bath & Beyond, has a leg up on Amazon. They each have over a thousand stores all over the country, while Amazon has only a few.

Sure, Amazon offers same-day delivery for many of its products to consumers living in urban locations. But that’s not nearly as satisfying to customers that demand instant gratification.

There are three Target stores within a few miles of my house. The nearest one is only a five-minute drive away. For that matter, there are just as many Bed Bath & Beyond locations that are equally close.

I doubt I would ever venture into a Bed Bath & Beyond store to figure out what I want. But I would be willing to drive to one to pick up something I purchased online if I needed it right away.

Essentially, that’s the bet the company is making with this new hire. If Mr. Tritton can grow Bed Bath & Beyond’s online sales at anything close to Target’s rate, BBBY’s share price could go through the roof.

Even after its recent jump, Bed Bath & Beyond stock is still cheap. At a share price of $12, BBBY is back to where it was at the start of this year.

That being the case, you could simply buy the stock and wait. If it gets back to $18, where it was trading only 13 months ago, you’d have a 50% profit.

That’s a nice gain in anyone’s book, but you could do a lot better. Instead of buying the stock, consider buying a call option on the stock.

A few days ago, a call option that expires in January 2021 with a $10 strike price could be bought for $4. If BBBY rises to $18 by that date, you would double your money.

Of course, there is always the risk that BBBY might drop below $10, in which case this option would be worthless. That’s the risk you take when you buy an option to open a position.

Another way to play it is to sell a “naked put” on BBBY. In that case, you could have received an option premium of $2.50 for the same strike price and expiration date.

If BBBY continues to rise, eventually you could close out this position by buying back the same put option for considerably less than what you paid for it.

Either way, you would be betting on Bed Bath & Beyond to follow in Target’s footsteps under the guidance of its new CEO. Apparently, Wall Street believes that may be a bet worth making.

But if you prefer a safer way to rack up big gains using options, I suggest you take a look at what my colleague Jim Fink has been able to accomplish.

As chief investment strategist of Options for Income, Jim has been using seasonality to trade options very successfully.

In fact, Jim has developed a “profit calendar” trading system that allows you to collect payments every Thursday, similar to a paycheck. These payouts can range in value from $1,150 to $2,800, but average out to $1,692.50.

It’s like getting an extra paycheck, week in and week out. The gain is so reliable, you can schedule it on your calendar. Jim made himself a wealthy man with his system. Now he wants to share his secrets with you. Click here to get started.