Some analysts say the stock market needs a vacation. Private equity funds appear to be taking that advice literally.

To see why, just take a look at the past week’s trading activity in Hilton Grand Vacations (NYSE: HGV), a timeshare company that develops, markets, and operates vacation ownership resorts. 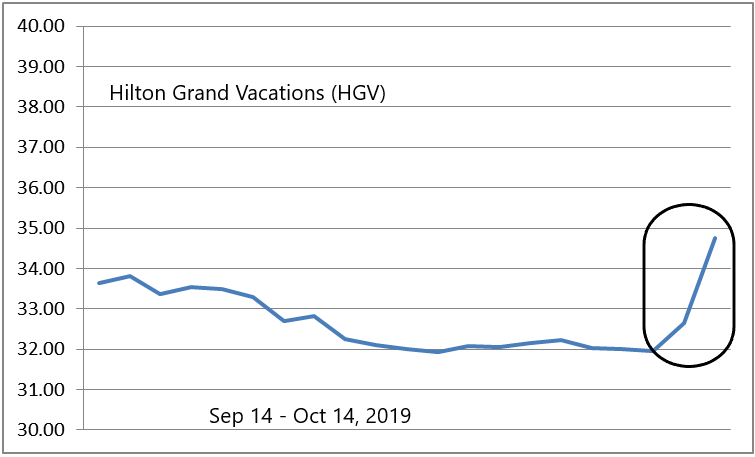 On October 14, Apollo Global Management made an opening offer to buy Hilton Grand Vacations for $40. That’s about a 25% premium to where it closed the day before.

However, Hilton Grand Vacations only traded up to $35 on the news. That suggests not many people on Wall Street believe it will happen.

That’s surprising since The Blackstone Group (NYSE: BX) reportedly also made a competing offer for Hilton Grand Vacations. Usually, when two buyers are bidding on the same property that will drive its price above the initial offer.

Also, this isn’t the first time that Apollo has shown interest in a timeshare operator. Three years ago, it bought Diamond Resorts International for $2.2 billion.

To add further credence to the odds of this deal getting done, a third private equity firm is involved. Elliot Management owns a large minority position in Hilton Grand Vacations and is openly pushing for it to be acquired.

Elliot is famous for buying large stakes in small companies that it believes are undervalued. Then, Elliot uses its clout to force the company into agreeing to a restructuring to its advantage.

Needless to say, if Elliot is looking to maximize the return on its investment, it will push for the highest buyout offer Hilton Grand Vacations can fetch. So, Blackstone will need to outbid Apollo’s $40 per share offer if it wants to acquire the business.

Doubling in with Dart Group

At the time, Dart Group’s sudden jump was attributed to an increase in holiday travel. In hindsight, it appears more likely word leaked out in advance of Apollo’s offer and some Wall Street insiders decided to buy it before a private equity fund does. 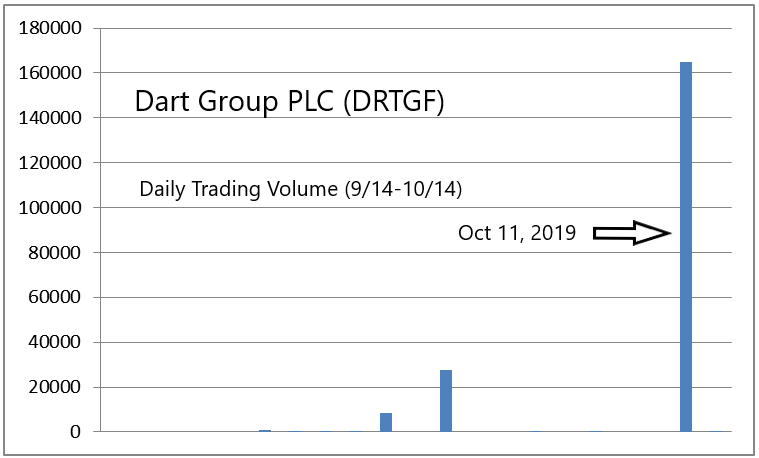 Dart Group has American Depository Receipts (ADRs) that trade over-the-counter (OTC) here in the United States. Until last week, there had been very little interest in Dart Group. In fact, during the two days leading up to Dart Group’s big jump there was no trading volume at all.

The next day, Dart Group jumped 20% on volume of nearly 165,000 shares. That’s about 40 times its average daily trading volume.

This sudden interest in timeshare operators may seem contrary to the slowing global economy. If anything, vacation spending might be expected to decline as nervous consumers cut back on discretionary spending.

However, what this may really be is a real estate play. The stock market is near record highs and at risk of taking a big dive.

Since bond yields are near record lows, some investors may feel that owning income-producing real estate is the best place to park their cash and earn a reliable stream of income at the same time.

The real estate investment trust (REIT) sector is hot. As my colleague Robert Rapier noted a few days ago, 19 REITs have posted all-time highs this year while only one has reached a new low.

TINA gets dumped for REBA

For the past couple of years, the stock market has pushed higher on the theory that “there is no alternative” (TINA) to stocks. According to TINA, stocks may be overvalued but they are still more attractive than bonds or cash.

Now, it looks like Wall Street has a new girlfriend and her name is REBA (“Real Estate is a Better Alternative”). Look out TINA; you may be getting dumped soon!

Professional investors have made a lot of money in the stock market over the past 10 years. Now, they may just want to preserve it until after the next major stock market correction.

If that happens, there may be a rush into equity REITs that own property and pass through most of the rental income to their shareholders. By law, a REIT must pay out at least 90% of its net income as dividends to avoid taxation.

For that reason, you can obtain dividend yields in the mid-to-high single digits from many equity REITs. That’s far higher than the sub-2% yields available on Treasury notes.

As an investor, you should keep an eye on 5G (“fifth generation”) technology. The companies developing and leveraging 5G are huge money-making opportunities.

Ultra-fast 5G wireless infrastructure also is a pivotal battlefield in the trade war. As the U.S. and China jockey for advantage in rolling out 5G, we’re witnessing nothing less than a fight for the future.

For details on the compelling investment opportunities in 5G, click here for our latest white paper.