The tit-for-tat trade war, the chaos of Brexit, the impeachment circus in Washington…it can all wait for another day.

Today, I want to conduct a deep dive into a single business — cannabusiness, to be precise. The legalization of marijuana represents your greatest chance right now to exponentially boost your wealth.

Just last week, California Governor Gavin Newsom signed a slew of bills that benefit the cannabis industry. Chief among the new laws is a change in the state’s tax code that allows cannabis companies to claim tax deductions, a huge break for marijuana entrepreneurs. The Golden State is the largest legal cannabis market in the world and it sets the pace for other states.

In the U.S., 10 states and the District of Columbia have full marijuana legalization, and another 23 states permit medicinal uses with permission from a doctor.

This “green rush” is feeding an investor frenzy, reminiscent of the 19th century gold rush. We’re witnessing enormous investor excitement over a multitude of marijuana plays.

Problem is, many of these plays are tiny penny stocks that generate neither earnings nor revenue. Gullible investors who indiscriminately pile into the pot sector will see their money go up in smoke.

Below, I’ll point you in the direction of the right marijuana investments. Investors who jump aboard quality pot companies in their formative stages could reap life-changing profits. But you need guidance.

For the counterculture of the 1960s and 1970s, smoking pot was an illegal act of rebellion.

And today? In many cities throughout America and Canada, it’s as easy to get marijuana delivered to your front door as pizza. As Bob Dylan sang: The Times They Are a-Changin’.

The legalization of cannabis is one of the greatest investment opportunities in a generation. “Mary Jane” has moved from Woodstock to Wall Street, representing a disruptive force for a slew of industries, including pharmaceutical, tobacco and beverage companies.

A leader in the marijuana revolution is Canada. In October 2018, the Great White North legalized on the federal level the possession and use of recreational marijuana. Canada was the first G7 nation to take this bold step and it triggered a seismic shift in the worldwide marijuana industry.

According to a recent study by Grand View Research, the global legal marijuana market should reach $66.3 billion in sales by 2025, up from $10 billion in 2018. That’s a whopping increase during the projected time frame of nearly 600%. The result has been a proliferation of marijuana stocks that are captivating investors who seek fast riches.

Public sentiment continues to shift in favor of marijuana. About 62% of Americans think marijuana should be legalized.

Parents used to warn their kids about marijuana. Now mom and dad are using pot themselves. Among patients in the U.S. who use medical marijuana, 45% are parents. Lawmakers are aware of this cultural shift and they’re jumping on the bandwagon.

The 2018 U.S. midterm elections were kind to the marijuana industry, as many lawmakers who oppose marijuana legalization lost their bids for reelection and were replaced by marijuana-friendly challengers.

The marijuana industry got a big boost in late September, when the House of Representatives passed a standalone marijuana banking reform bill, an historic first. The House advanced a bill that would protect banks that service the cannabis industry from being penalized by federal regulators.

Called the Secure And Fair Enforcement (SAFE) Banking Act, the legislation seeks to expedite the provision of financial services to cannabis companies by removing the fear of potential federal action against lenders.

Many banks are reluctant to lend to marijuana businesses because of uncertainty over the industry’s legal status. The bill moved to the Senate, where chances of passage are good. President Trump has not indicated whether he would sign it, but the trend is clear. The marijuana industry is here to stay.

The next catalyst for growth…

Marijuana remains illegal at the federal level in the U.S., but it’s probably only a matter of time before federal prohibition is lifted. And when it is, the industry will experience a new wave of explosive growth.

None other than Attorney General William Barr, a social conservative, signaled at a recent Senate appropriations hearing that he is open to the approach outlined in legislation such as the STATES (Strengthening the Tenth Amendment Through Entrusting States) Act. Barr has circulated the legislation to the U.S. Department of Justice for review and comment.

The STATES Act, which was reintroduced this year in both chambers of Congress, would create an exemption in the federal Controlled Substances Act for state-legal marijuana programs.

Barr’s surprisingly flexible attitude toward marijuana is yet another sign that the days of the federal ban are numbered. Meanwhile, on the state level, governments that have legalized marijuana have gotten addicted to the tax revenue, which means there’s no going back (see chart). 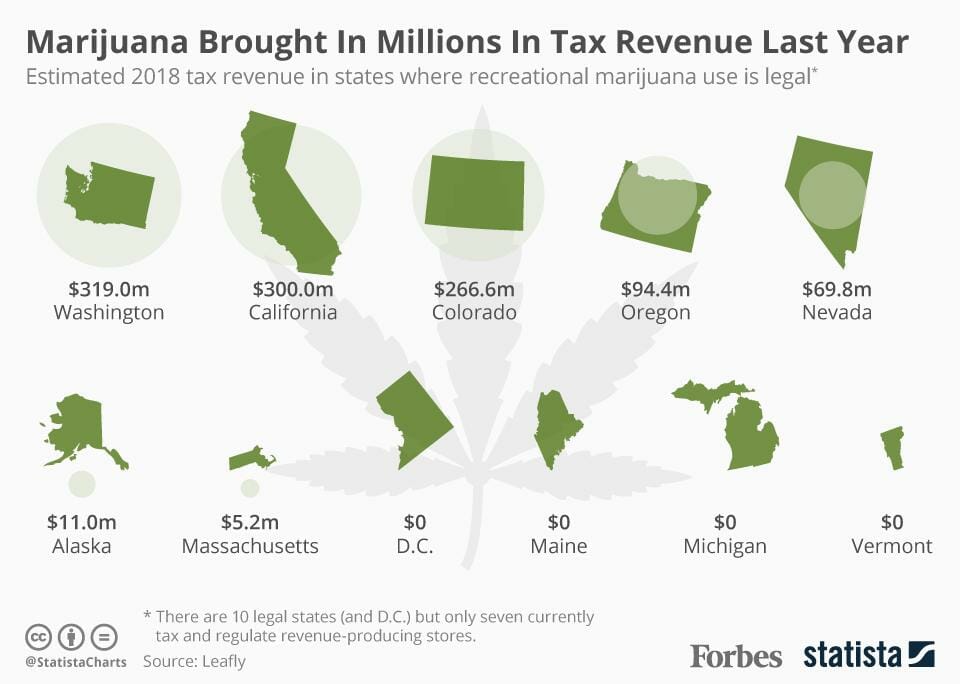 Want to predict the behavior of politicians? Follow the money. Many financially strapped states are now considering the legalization of marijuana, because the industry has proven a cash cow for government coffers.

Weeding out the bad players…

It’s also worth remembering that marijuana itself is only a plant. It’s an agricultural commodity. Once the bad players are weeded out (pun intended), there will be a struggle over market share. We’re already seeing ruthless consolidation, as marijuana companies merge for vertical integration and economies of scale. Commoditized businesses eventually witness price wars, which weighs on earnings.

When looking for suitable marijuana investments, my strategy is to find companies that apply a unique value-add, whether in the recreational or medicinal sector.

I look for pot companies with patents, proprietary technology or special managerial know-how. I also prefer companies with solid balance sheets, branded products and extensive supply chains. These are the marijuana investments that will survive and thrive, whereas it’s no great feat to simply grow a plant or squeeze oil out of a leaf.

Some cannabis stocks are stellar investments. Many others are not. You need to conduct due diligence. The good news is, we’ve done the homework for you. My team has unearthed hidden gems in cannabusiness that most investors don’t even know about.

To learn the details of the best marijuana plays now, click here for a free report.

John Persinos is the managing editor of Investing Daily. Questions about marijuana investing? You can reach John at: mailbag@investingdaily.com