Climbing the Wall of Worry…Brick by Brick

I’m a big fan of British humor. The resilience of this bull market reminds me of a scene in the darkly comedic movie “Monty Python and the Holy Grail” (1975). A Medieval family tries to toss a sick member onto a cart of corpses for disposal. The old man protests, yelling: “I’m not dead yet!”

This bull market isn’t dead…yet. Despite the bull’s periodic obituaries in the financial press, the benchmark SPDR S&P 500 ETF (SPY) has generated a total return year-to-date of 21.2%, as of Thursday’s market close.

For several months, many analysts have persistently called for a stock market correction to occur sometime this year. I’ve been one of them. The correction hasn’t happened. But eventually, it will. Below, I’ll show you how to simultaneously prepare and still make money.

Stocks have risen in defiance of the Sino-American trade war, the bitter battle over President Trump’s impeachment, excessive valuations, sputtering global growth, recession fears, military strife in the Middle East, alarmingly high public and private debt levels, and weakening corporate earnings. But all and all, they’re just bricks in the wall (apologies to Pink Floyd).

The wall of worry…

However, stocks this year have continued to climb a wall of worry and currently hover at record highs. The Dow Jones Industrial Average, the S&P 500, and the tech-heavy Nasdaq all closed modestly higher yesterday.

To be sure, the stock market has been volatile. This morning in pre-market futures trading, the three main U.S. stock indices were all trading in the red, due to renewed concerns that the global growth engine of China is sputtering.

China released third-quarter gross domestic product (GDP) data on Friday showing the economy grew 6.0% on a year-over-year basis. The consensus expectation was for China’s Q3 GDP to grow 6.1% from a year ago. China’s GDP has declined dramatically since the first quarter of 2018 when it grew 6.8%. Analysts cited the trade war as the major headwind for the world’s second-largest economy.

But for the longer term horizon, the stock market bulls remain in charge. Wall Street analysts in aggregate predict the S&P 500 will see a 13% increase in price over the next 12 months, according to research firm FactSet. The following chart tells the story: 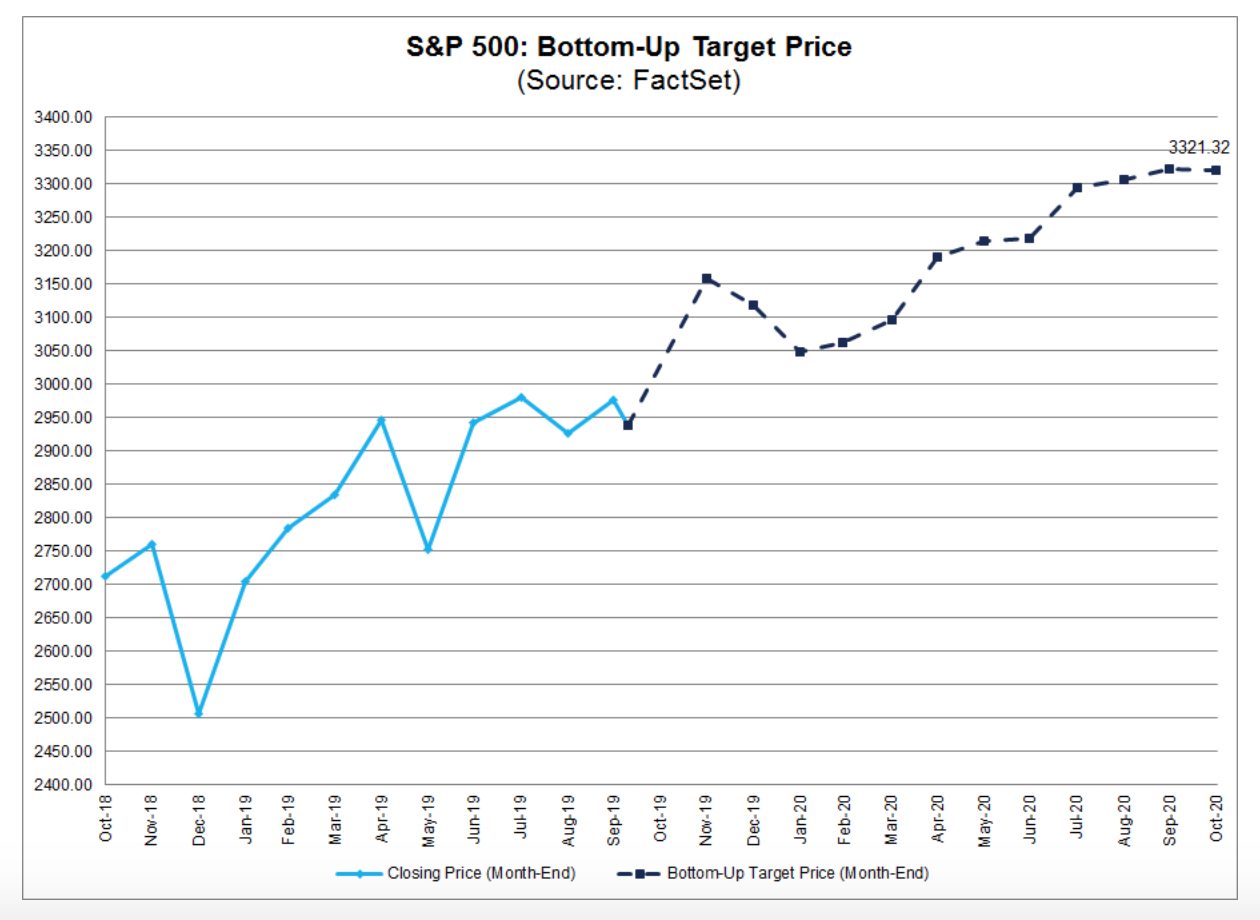 Fueling investor optimism this week has been a surprisingly strong earnings season. The consensus for Q3 corporate earnings is for negative growth, for the third quarter in a row. You’d never know it, though, by operating results so far. Sector stalwarts have been beating expectations on the top and bottom lines.

This earnings outperformance is occurring even as recession indicators flash warning signs. Factory activity around the world is slowing, tariffs are causing uncertainty and weighing on demand, and retail sales recently took a dive.

Read This Story: Bull Market at Risk as Consumers Get Stingy

So why are stocks rising? There’s still plenty of positive news to go around. U.S. unemployment is at a 50-year low, inflation is muted, interest rates are low, the Federal Reserve has turned dovish, businesses are reaping the benefits of de-regulation, and companies (especially in the technology sector) are flush with cash. The economic expansion is frayed around the edges, but it’s still intact.

It also helps soothe investor nerves that a Brexit deal appears to be in the offing. What’s more, Turkey agreed with the U.S. to pause its military attacks in Syria to give the Kurds time to withdraw.

But don’t get complacent. The situation overseas could quickly sour again, the economy is still overdue for a recession, and stock prices are high relative to projected earnings growth.

As we’ve recently witnessed with outbreaks of violence in the Middle East, a geopolitical shock could send already nervous investors into a panic. All it would take is a drone missile launched from a terrorist’s laptop.

And although I usually advise investors to tune out politics, the worsening rancor and disarray in Washington, DC should give pause to even the most cynical observer.

Defensive sectors such as health care exhibit plenty of appeal right now. Investors have been snapping up defensive plays and bidding up their prices, but several top quality health stocks are on the bargain shelf.

The health care sector boasts long-term tailwinds due to demographic factors. Inherently strong health stocks have suffered, though, as politicians running for president tout single-payer proposals that would be toxic for the for-profit health services sector.

Health stocks are well-timed plays for the late stage of the economic cycle and the robust earnings results this week of several industry bellwethers have been encouraging.

Another source of value is the beleaguered energy sector. FactSet projects that energy stocks will rack up the largest price increase over the next 12 months, at 23.4%.

Oil and gas stocks have been battered so far this year, with extreme volatility and downward momentum, due to swooning energy prices. The U.S. benchmark West Texas Intermediate (WTI) and its international counterpart Brent North Sea crude have been on a roller coaster during the past 12 months, frustrating energy investors who yearn for equilibrium in the energy patch (see chart). 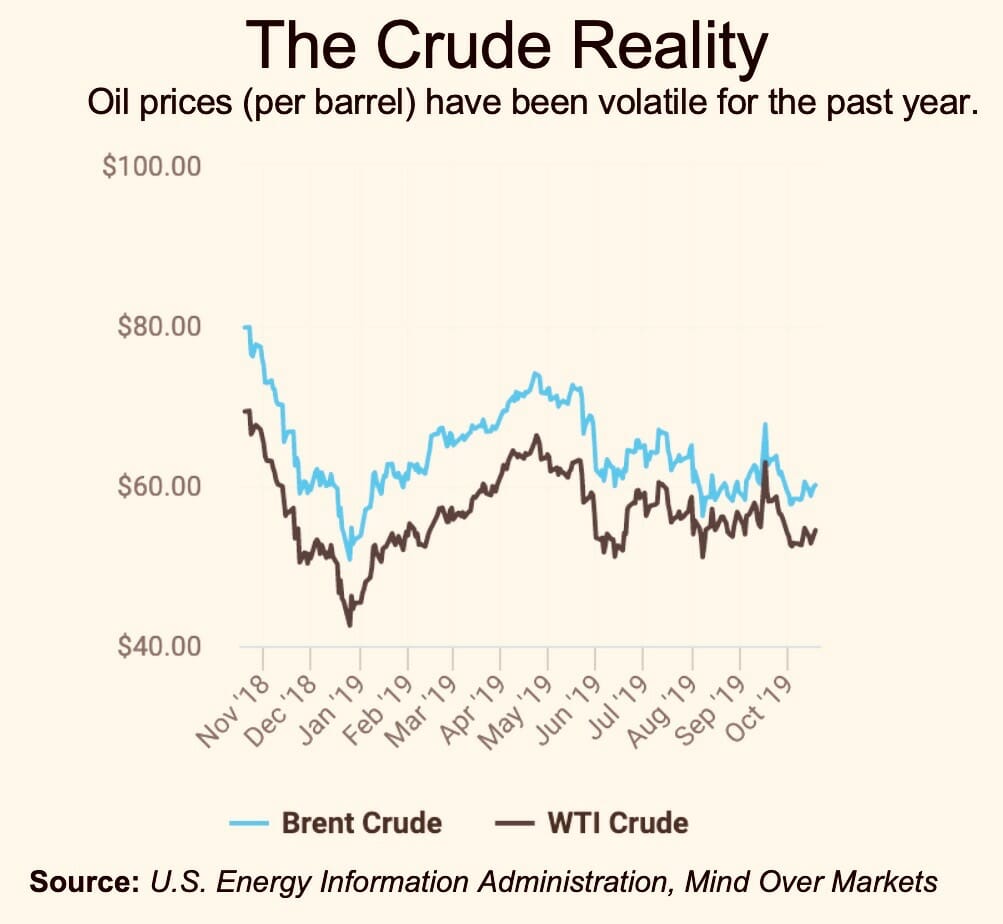 Also consider companies involved in the global roll-out of 5G wireless technology. Ultra-fast 5G will provide the infrastructure necessary for the Internet of Things. As such, 5G is a multi-year investment opportunity. For details on the best plays in 5G, click here.

Partake of growth opportunities such as health care, energy and 5G stocks, but also elevate cash levels and stay vigilant. Corrections seem inevitable in hindsight, but they usually come as a surprise when they actually hit.

According to investment firm Deutsche Bank (NYSE: DB), the stock market on average undergoes a correction about once a year. The last significant downturn was in the fourth quarter of 2018, when the S&P 500 came within a whisker of an official correction.

Don’t exit the market, but keep your powder dry for the bargains to come. Generally speaking, reasonable portfolio allocations under current conditions are 50% stocks, 25% hedges, 15% cash, and 10% bonds. Tailor these percentages to your stage of life and appetite for risk.

For the stock portion of your portfolio, consider exposure to the burgeoning marijuana industry. Many pot stocks are risky but we’ve pinpointed the future winners. To learn the details of the best marijuana plays now, click here for a free report.

John Persinos is the managing editor of Investing Daily. You can reach him at mailbag@investingdaily.com