Why You Shouldn’t Fight the Fed

There’s an old expression on Wall Street: “Don’t fight the Fed.” It means that investors should invest in a manner that aligns with the current monetary policies of the Federal Reserve, rather than against them. Let’s explore this idea further.

For good reason, many stock market participants closely monitor the Federal Reserve’s every move. As the U.S. central bank, the Fed has control over short-term interest rates and money supply.

When the Fed wants to stimulate the economy, it is said to be “dovish.” It can lower short-term interest rates and increase the money supply.

When the Fed wants to fight inflation and prevent over-heating, it is said to be “hawkish.” In this case, it can raise short-term interest rates and decrease the money supply.

This is why when Fed officials were implying at the end of last year that they would keep raising interest rates even though there were signs of an economic slowdown, it sent the stock market into a tailspin. Early this year, they changed their minds, and stocks immediately started to rise again. 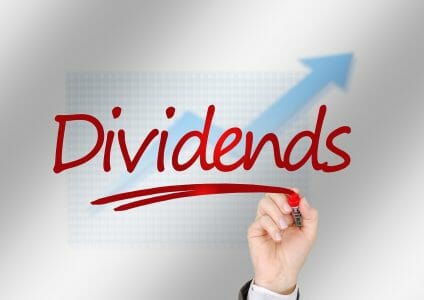 In the third quarter the Fed cut interest rates twice, and economic worries lingered. It comes as no surprise that best performing S&P 500 sectors in the third quarter were utilities and real estate. Both sectors are known for being conservative and dividend-rich investments.

You’ve probably heard on the news about the Fed rate cuts, but the Fed has also started buying Treasury securities this month. It will keep buying Treasury bills (maturity of one year or less) until at least the second quarter next year. The initiate purchase target is $60 billion per month.

Technically, the Fed is doing this to respond to a brief liquidity squeeze in the banking system. The Treasury bill purchases will help to increase reserves banks have on hand. However, it’s also had the secondary effect of pushing down short-term yields. 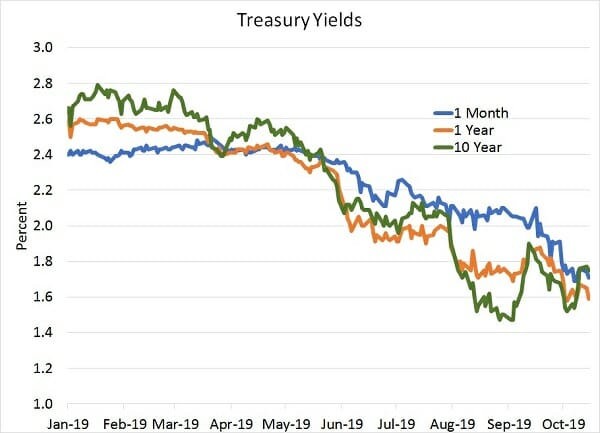 Many stock investors have been worried because historically an inverted Treasury yield curve has been a good recession predictor. However, inverted yield curves themselves don’t cause recession.

In the past, they tended to predict liquidity problems caused by Fed tightening monetary policy, which can hurt the economy. But as we’ve discussed, the Fed is now easing. Its latest move to buy Treasury bills has helped to close the gap between the 1-month and 10-year Treasury yields.

To be fair, the gap has also closed because in recent days, hopes for a resolution of the trade war between the U.S. and China have risen, but there’s no denying that the Fed has helped.

Previously, the inverted yield curve gave investors a chance to earn a higher return without locking up cash for a long time by buying short-term fixed income instruments. Now, even short-term yields are dropping.

We have long favored stocks for income compared to fixed income because stock dividends offer the potential for growth. The latest development in Treasury yields makes quality companies with steady revenues, cash flow, and growing dividend even better.

Editor’s Note: Regardless of monetary policy, one mega-trend is poised to generate profits for investors: the global roll-out of 5G wireless technology. 5G (“fifth generation”) tech will serve as the backbone for the Internet of Things, an interconnected system of computers and devices that will revolutionize our daily lives.

With 5G, trillions of dollars and the control of the future are at stake. We’ve put together a new report on specific investment opportunities in 5G. Click here for the full presentation.