Pot Stocks: Rising Out of the Ashes?

A year ago I asked, “Are Pot Stocks Ready for Prime Time?” I concluded that article with a warning: “That’s my concern now with “pot stocks” and the medical cannabis industry. They all look very much alike to me, and I don’t know what factor(s) will ultimately separate the winners from the losers.”

Based on what’s transpired since then, it appears that the stock market is having trouble separating the winners from the losers, too. Let’s take a quick look at how some of the most popular pot stocks from last year are doing now. 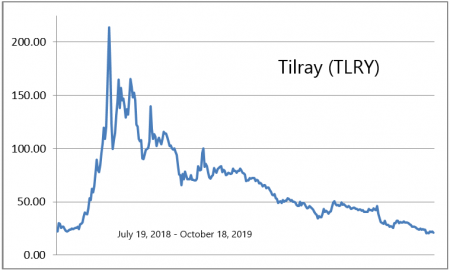 One of the companies mentioned in that article is Canadian marijuana grower Tilray (NSDQ: TLRY). Tilray’s share price briefly peaked above $200 in September 2018. This week, you could buy it for less than $22. That’s a 90% decline in just 13 months.

Another Canadian pot grower featured in that article, Canopy Growth (NYSE: CGC), is down 60% over the same span. Even Cronos Group (NSDQ: CRON), which more than doubled in value three months after that article was written, is worth less now than it was then.

All three of these stocks soared last year in anticipation of the legalization of marijuana in Canada for recreational use. As is often the case, the reality of that event has fallen short of overly optimistic expectations.

They’re beat up, and Wall Street no longer views them as the next generation of “can’t miss” growth stocks. That’s the bad news.

Here’s the good news. If you do not own any of those stocks, now may be a good time to buy them.

After the Bubble Bursts

So why buy pot stocks now? Think back 20 years (if you are old enough) to 1999, when the Internet bubble was reaching its peak.

At that time, it was widely believed that future revenue from Internet-based businesses would soon be enormous. The initial public offering (IPO) market was red hot. Any company with a concept that sounded even remotely viable was able to raise money from eager investors.

Unfortunately, we all know how that turned out. The following year, the bubble burst. Many of those unprofitable companies quickly went out of business.

However, some of the tech companies that survived that crash eventually went on to post stellar returns. In 2001, you could have bought one share of Amazon.com (NSDQ: AMZN) for less than $10. Now, that same share of stock will set you back nearly $1,800.

An even bigger winner was Apple (NSDQ: AAPL), which fell below $1 on a split/dividend-adjusted basis. This week, AAPL crossed above $240 to hit a new all-time high.

I don’t know how many present-day pot stocks will appreciate 2,000% over the next 20 years. But I do believe that some of them will, and they may be bottoming out now.

In addition, there are companies not currently thought of as pot stocks that might end up being among the biggest winners. Just as Yahoo bought dozens of small Internet businesses to create a giant Internet portal, some large consumer product companies are getting involved in the marijuana industry.

An acquisitive approach to building a vertically integrated marijuana company is already underway at Altria (NYSE: MO), Philip Morris (NYSE: PM), and Constellation Brands (NYSE: STZ). Each of them has recently bought large minority interests in a variety of much smaller pot stocks.

However, none of them have anything to show for those purchases… yet.

Before the Next Wave Hits the Beach

Currently, some form of medical marijuana is legal in 33 states and the District of Columbia. However, recreational use is legal in only 11 states and DC. Next year’s general election could prove to be a turning point in the evolution of the legal marijuana industry.

The result may be a liberal backlash that sweeps Democratic candidates into office with a more progressive stance towards marijuana use. If it happens here, the repercussions may carry across the Atlantic Ocean.

Surprisingly, most of Europe is behind the U.S. when it comes to legalizing marijuana for recreational use. Europe’s four most populous countries – Germany, France, Italy, and Spain – still prohibit the recreational consumption of marijuana (oddly, Italy allows low-TCH pot to be sold, but it is illegal to consume marijuana there regardless of its THC level).

As for the United Kingdom, with a population roughly equal to that of France, the recreational use of marijuana is still a criminal offense. Believe it or not, that’s more severe than in Russia where possession of small amounts of pot is only an administrative offense.

I doubt that Russia will soon legalize recreational marijuana use. However, I would not be surprised if most of Europe does so soon along with the United States. If and when that happens, the optimism that drove pot stocks higher last year could pale in comparison to the euphoria that may propel some of them to new highs in the future.

As I’ve just explained, the marijuana boom is a once-in-a-lifetime investment opportunity. But you must be selective. Some pot stocks will thrive and enrich investors; others will go bust. Our team has sorted through the marijuana industry to pinpoint the future winners. Click here for details.