How to Profit from Nokia’s Woes

Five months ago, a reader asked if I considered Nokia (NYSE: NOK) “a major 5G contender.” I replied, “I would classify Nokia as a 5G beneficiary, but I don’t think it will get as much lift from 5G as the major U.S. players in the near term.”

At that time, Nokia was trading near $5. As recently as March, it was above $6, so the stock was already down more than 20% this year. Turns out, things were about to get worse.

On October 24, Nokia fell below $4 after releasing Q3 results that were in line with expectations. However, the company reduced its earnings guidance for 2019 and 2020. In addition, it temporarily suspended its dividend for the next six months. 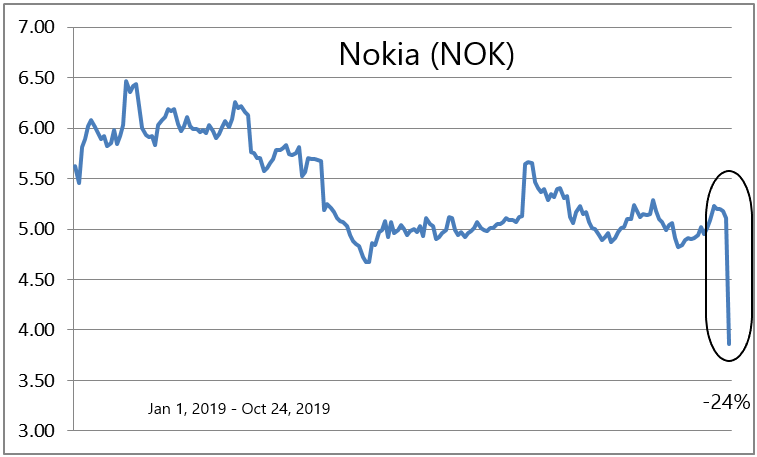 For existing Nokia shareholders, this report hit like a bombshell. It also caught Wall Street off guard, resulting in a quick 24% sell-off that morning.

Over the past five years, the stock has lost more than half its value. But for opportunistic investors looking for a quick profit, Nokia’s current troubles may provide the perfect entry point.

To be clear, Nokia is not at risk of going out of business anytime soon. In fact, it is still profitable. Nokia’s reduced estimate for earnings per share (EPS) for next year is roughly 0.25 euros (about 28 cents).

If the company is able to hit that goal, the stock is valued at only 14 times next year’s earnings. That’s a 25% discount to the same multiple for the S&P 500 Index.

Bear in mind, Nokia is a global leader in the 5G market. Building out that infrastructure is costing Nokia a lot of money in the near term. But within the next few years, it should grow to be immensely profitable.

Also read: “5G: The Fight for the Future”

Better than a Dividend

As a rule, I don’t like trying to catch a falling knife. However, I do like taking advantage of what might be an overreaction to bad news.

That being the case, I do not recommend simply buying NOK and waiting for it to rebound. For all we know, it may drop even further in the weeks and months ahead, especially if the overall market goes through a correction.

Instead, I like the idea of selling a put on Nokia at an exercise price of $4 that expires in January. Last week, that option could be sold for 30 cents or roughly 8% of Nokia’s share price at the time.

I get to keep that money no matter what happens to Nokia’s share price. If it does not rise above $4 by the time this option expires, I will have the stock put to me at that price.

However, the options premium of 30 cents I received reduces my adjusted cost basis to $3.70. I’d be fine with owning NOK at that price if that’s what ends up happening.

If Nokia rises above $4 by this option’s expiration date, then that’s the end of it. I get to keep the 30 cents and the stock will not be put to me.

To my way of thinking, the options premium I received for selling a naked put has effectively replaced Nokia’s cash dividend. However, it works out to a far greater amount since I am earning 8% in less than three months instead of an entire year.

If the stock is put to me in January, then I will be entitled to receive any dividends paid by Nokia when it is reinstated. And if that happens, I expect NOK would rise well above $4 giving me some capital appreciation, too.

No Time to be Passive

Some of the smartest people I know on Wall Street do not buy stock. Instead, they sell naked put options on stocks that they would be happy to own if they end being put to them.

Over time, the combined value of the options premiums, dividends, and eventual capital appreciation can work out to a very big number. Recently, I explained how I earned 9% on Best Buy (NYSE: BBY) in less than two months using a similar strategy.

Given the headwinds currently buffeting the financial markets, I believe many stocks will at best trade sideways over the next three months. For passive index investors used to the stock market constantly going up that means no net gains for the rest of this year.

But for active options traders, this type of environment can be quite lucrative. That’s because options premiums go up when there is more fear in the market.

If you are an options buyer, then higher premiums will cut into your profits. But for options sellers, that equates to more income now for the same amount of capital at risk.

If you have never engaged in this type of investing before, I do not advise doing it on your own. It’s risky, especially if you don’t know which stocks to trade and which to avoid.

In that case, I suggest you take a look at how my colleague Jim Fink can help you.

Jim Fink, chief investment strategist of Options For Income, is a seasoned investor who has devised an options trading system that made him rich. Now, he wants to share his secrets. Jim can show you a fast, easy trade that pays off in a big way, every Thursday. It’s sort of like getting an extra paycheck.

Jim can point to scores of satisfied readers who made big money following his advice…and he can show you how to follow in their footsteps.

Want to learn more? Click here for our presentation.