Tiffany: Is Louis Vuitton Paying Too Much?

The proposed purchase price works out to $120 per share. However, TIF ran up to $130 that day on hopes that another bidder might emerge.

I doubt that will happen. The global economy appears to be on the verge of recession. The downturn could be even worse in Europe, where Louis Vuitton is headquartered in Paris, France.

Tiffany is headquartered on Fifth Avenue in New York City. That’s the closest thing we have to the Avenue des Champs-Elysees on this side of the Atlantic.

In that respect, combining these two companies makes a lot of sense. They both sell high-end fashion items to wealthy consumers that don’t bother to ask about price.

In this case, it is Louis Vuitton that needs to think hard about how high of a price it is willing to pay for Tiffany. Three months ago, Tiffany released its Q2 results that included a 3% decline in net sales.

Tiffany’s CEO, Alessandro Bogliolo, said this about the company’s performance during the first half of 2019:

“With the tough comparison to last year’s strong performance in the first half behind us, and in spite of the headwinds of weak demand from foreign tourists, currency exchange rate pressures and continuing business disruptions in Hong Kong, we are actively managing what is in our control and positioning our Brand to win — accelerating new product introductions and keeping a visible profile.”

In other words, Tiffany’s strategy to offset weakening demand for its goods is to introduce even more products and spend heavily on advertising.

I don’t know why Louis Vuitton decided to make this move now. If it waited a few more months until Tiffany reported its holiday sales, it may have been able to buy the company at a cheaper price. 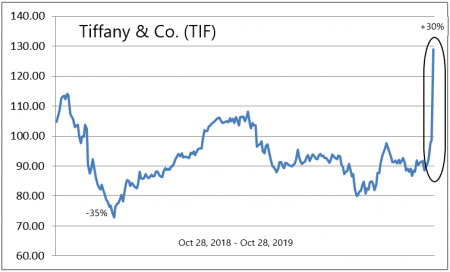 At this time last year, TIF was trading above $115. By the third week of December, it had fallen below $75. That’s a decline of 35% in only seven weeks! As recently as two weeks ago, it was still below $90.

At the moment, retail spending is the single biggest contributor to economic growth in the United States. Unemployment is low, as is inflation.

But a change for the worse in either one (or both) of those factors could send the economy into a tailspin. If that happens, a stock market correction is all but assured.

That’s why I find the timing of this offer so odd. It’s not as if Tiffany stock were grossly undervalued. At a share price of $130, TIF is valued at roughly 25 times next year’s earnings.

That is a substantial premium to the 18 multiple for the S&P 500 Index and is more than the 23 multiple for Alphabet (NSDQ: GOOGL). Since when does a 182-year-old jewelry retailer qualify as a hot growth stock?

Both the timing and the price of this offer have one big thing going for them. Louis Vuitton’s Chairman and CEO, Bernard Arnault, is the third-richest person in the world.

Like Warren Buffett, Arnault is a self-made billionaire who became wealthy by making shrewd investments. He knows a good deal when he sees one, so he presumably believes now is the right time to buy Tiffany.

I hope Arnault turns out to be right about making this acquisition. If so, that means the global economy is about to take a big turn for the better.

However, if Arnault turns out to be wrong, this deal may come back to haunt him. He won’t be able to sell Tiffany to another buyer, at least not at a reasonable price.

That’s one reason why I think the stock market has overreacted to news of this deal. I don’t believe Arnault will allow himself to get caught up in a bidding war if another suitor emerges.

Tiffany’s board already has announced that it will reject the initial offer. It never hurts to negotiate in good faith, but it would be a mistake for Tiffany to take a hostile stance towards this deal.

If Tiffany’s holiday sales come in on the low end, the company may change its tune. However, if that happens, Arnault may change the price he is willing to pay for Tiffany, too.

That’s what makes trading deals like this so difficult. A lot of very smart money believes this deal will get done, and I don’t like betting against Wall Street’s well-informed insiders.

But I know one expert who has consistently beaten Wall Street at its own game, and you can play along with him. I’m referring to my colleague Jim Fink, chief investment strategist of Options For Income.

Jim is a seasoned investor who has devised a trading system that made him rich. Now, he wants to share his secrets. Jim can show you a fast, easy trade that pays off in a big way, every Thursday. It’s sort of like getting an extra paycheck.