Millennials and Marijuana: Agents of Change

Forget Woodstock! Enough already. It’s time for baby boomers (like me) to get over ourselves and to stop fetishizing the 1960s.

It’s a different demographic, the millennials, who are an even greater force behind marijuana legalization and commercialization. And therein lies an important but largely ignored investment theme, as I’ll explain below.

Research shows that companies that connect with their customers on an emotional level tend to outperform their competitors. This truism applies to marijuana companies that target millennials.

The millennial generation, born between 1982-2000, is now the largest generation at over 77 million and already outnumbers baby boomers. They’re often referred to as self-entitled and coddled, because they’ve been praised too often by their baby boomer parents (I plead guilty).

But as an investor, here’s how you should look at it: Millennials are the most diverse and promising generation in the U.S. They have the largest buying power and the most social and political power.

Millennials are one of the most educated generations; 61% of adult millennials have attended college. Millennials grew up with the Internet and helped shape how the 2019 world dates, eats, socializes, shops, communicates, speaks, and protests (e.g. social media hash tags).

The increasing legalization of recreational and medicinal marijuana is one of the biggest business trends unfolding today. Pot is becoming a multi-billion dollar industry, with profound implications for consumer society. Millennials are a major change agent in the mainstreaming of marijuana.

It’s not just revenue from recreational and medicinal pot products. The legalization of cannabis and hemp has the potential to revitalize farming communities, create jobs in economically depressed urban centers, foster new innovations for pharmaceuticals and nutraceuticals, and ignite a manufacturing boom.

A time-proven way to make money over the long haul is to invest in companies with disruptive technologies that are transforming business models. The rise of e-commerce pioneer Amazon (NSDQ: AMZN) epitomizes this truism.

The advent of online shopping has upended the retail industry and turned many once-dominant retail names into dinosaurs, much the same way web-based publishing has decimated many famous magazine and newspaper titles in the print world.

However, this “creative destruction” poses enormous opportunity for investors. One investment opportunity right now is the nexus between the rising economic power of millennials and the marijuana boom.

Millennials are notoriously resistant to investing and saving. However, growing numbers of this demographic group are grasping the potential for marijuana and they’re pouring money into marijuana-related stocks and exchange-traded funds, whereas before they largely ignored Wall Street.

Millennials also increasingly prefer cannabis to booze and they’re more likely to buy marijuana products if they’re marketed as a “lifestyle” brand. High-income millennials are spending almost a third of their discretionary income on entertainment.

Much is made about how aging baby boomers and even their parents are turning to medical marijuana to address their aches, pains and illnesses. This trend is very real.

However, now flying under the radar of the financial press is a mega-trend occurring in plain sight, which is the growing role of millennials in creating marijuana companies, investing in pot stocks, buying pot products, and working to make laws more marijuana friendly.

It’s an investment angle that gets short shrift. You should look for companies that understand and exploit this dynamic. In the marijuana industry shake-out to come, these companies will be among the survivors.

Cannabidoil (CBD) for graying boomers is all fine and good, but the big money over the long haul will be in marijuana “lifestyle” products for increasingly affluent millennials: marijuana tourism, branded pot products with hipster appeal, marijuana-themed clothing, high-end marijuana vaping parlors…you name it.

As the following chart shows, the legalization of cannabis in the U.S. continues apace. Marijuana remains outlawed at the federal level but a growing number of states are legalizing weed to varying degrees: 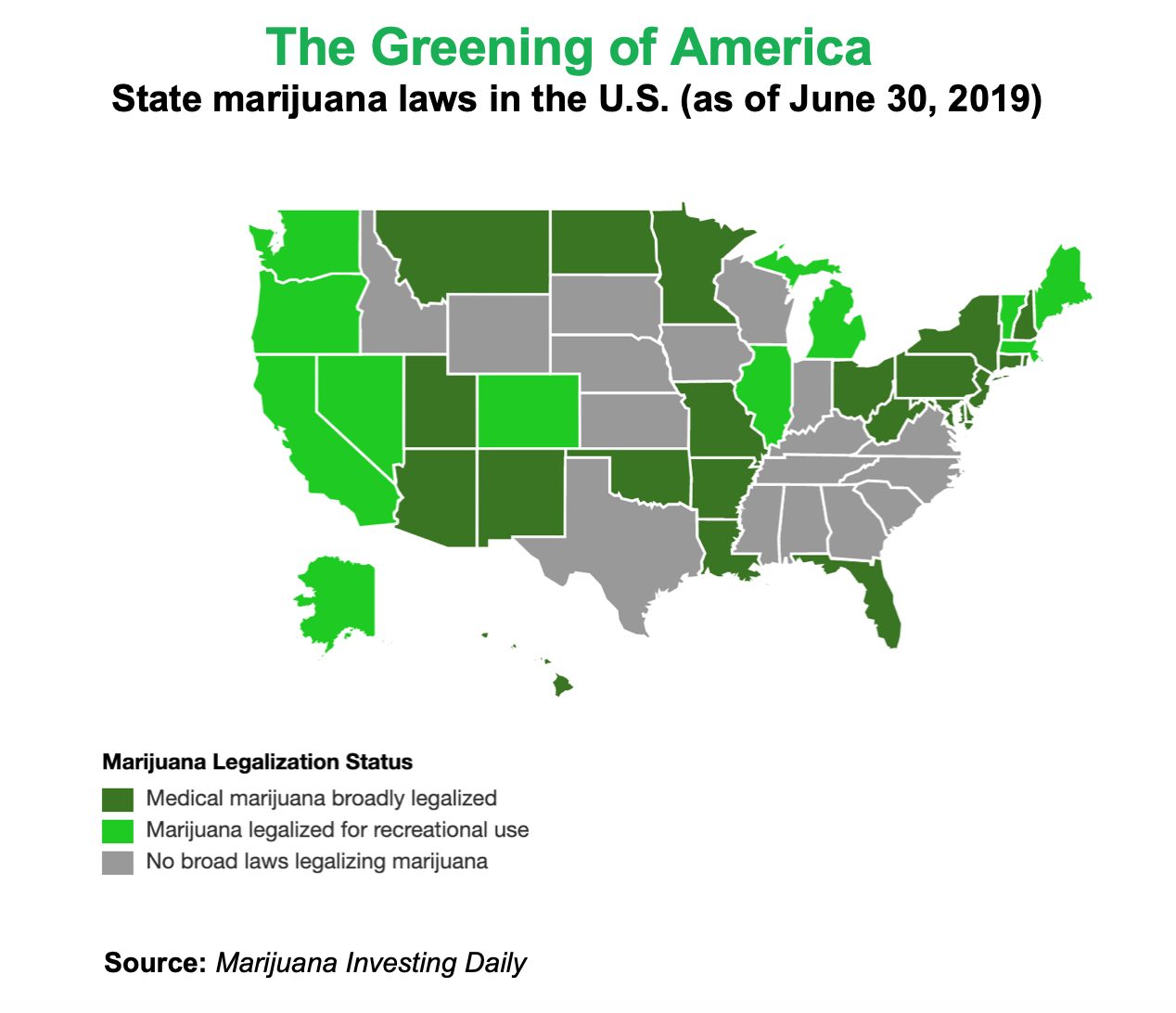 “The illegality of cannabis is outrageous, an impediment to full utilization of a drug which helps produce the serenity and insight, sensitivity and fellowship so desperately needed in this increasingly mad and dangerous world.” Most millennials would agree.

Many millennials came of age during the Great Recession of 2008-2009, and while they are not the first generation to experience an economic downturn, they came out of it reinventing the job market, as a wave of bloggers, freelancers and social media influencers helped rethink the meaning of education and work.

The recession and related financial crisis marked the worst economic downturn since the Great Depression of the 1930s. It crushed the economic identity of an entire generation, forcing twenty-somethings into debt-financed education and low-paying jobs, with little reprieve.

Yet these laid-off young adults returned to school, entered new industries and built startups. They were shaken but still committed to shaping and being part of the global economy. They are now applying this entrepreneurial attitude to the emerging cannabis industry.

The cannabis industry will help shape the political landscape by decriminalizing cannabis use, possession, cultivation and sales not only in the U.S., but also around the world. Although millennials were raised on D.A.R.E (Drug Abuse Resistance Education) and fearmongering This is Your Brain on Drugs public service announcements, 73% of the generation support full legalization and consider the war on drugs a complete and utter failure.

According to political data, millennials came out in force during the 2018 midterm elections to help send marijuana-friendly politicians to Congress, resulting in the Democrats gaining control of the House. Those newly minted lawmakers are now introducing a raft of bills to normalize marijuana laws.

As the marijuana industry grows, it will revitalize communities and ancillary businesses, by creating more jobs for citizens of varied educational levels and skill sets. As legalization spreads throughout the U.S., it will spawn new industries, a need for product innovation and force existing companies to rethink their products and services.

Millennials are already fueling innovation, through social media and other digital activities that force companies to keep up with the young consumer.

The growth of the marijuana industry also means a shift in how society views drug use and the use of cannabis. As more millennials become parents, there will be a drastic shift in how their children view cannabis consumption and hemp.

Baby boomers and Generation X are involved in shaping and funding the marijuana industry, while simultaneously reaping the benefits, but their role will be relatively short lived. The oldest millennials are only in their early 30s and they have the power and time to change the cannabis industry for the next 60 years.

If you seek an investment theme with multiyear momentum, the link between millennials and marijuana is the place to look. I’ll elaborate on this money-making angle, in future issues.

John Persinos is the editor-in-chief of Marijuana Investing Daily. For the record, he was born during the Eisenhower era. You can reach John at: mailbag@investingdaily.com