Powell Speaks! So…What Did He Mean?

My wife Carole is from South Dakota. She uses what I call “Great Plains speak.” If she says something is “interesting,” it means she hates it. If I ask her how she’s doing and she says in a flat voice “I’m okay,” it means something is terribly wrong.

Which brings me to “Fed speak.” Those who interpret Federal Reserve statements require the parsing skills of Talmudic scholars.

At the end of its two-day Federal Open Market Committee (FOMC) meeting today, the Federal Reserve announced a one-quarter-point interest rate cut, its third (and probably final) cut this year.

Signs of moderating economic growth, combined with uncertainty caused by the Sino-American trade war, prompted the Fed to make this additional “insurance cut.” The 0.25% cut brings the fed funds rate to 1.50%-1.75%, an expected change that was fully priced into the stock market.

Along with the latest interest rate cut came new language from the FOMC indicating that further cuts this year face a higher bar:

“The Committee will continue to monitor the implications of incoming information for the economic outlook as it assesses the appropriate path of the target range for the federal funds rate.” Wall Street seized on this phrase as a hint that the Fed was turning slightly hawkish, because it replaced language used in previous announcements this year that said the Fed was committed to “act as appropriate to sustain the expansion.” Got the distinction?

After the rate cut was announced, Fed Chair Jerome Powell held the traditional late afternoon press conference. As is the custom with Fed chairs, Powell was purposely vague. He said the central bank’s current monetary policy is “likely to remain appropriate.” He also said “we are not thinking about raising rates right now” and the Fed would need to see a “really significant” rise in inflation before hiking rates. He noted that inflation pressures remain muted.

Translation: You should expect the status quo on monetary policy for the rest of the year. The Fed’s final 2019 meeting is December 10-11.

The Federal Reserve operates under a mandate from Congress to “promote effectively the goals of maximum employment, stable prices, and moderate long term interest rates.” It’s often referred to as the Fed’s “dual mandate.”

Powell and his colleagues have been walking a fine line. They don’t want to ignore recessionary signals but they also don’t want to overstimulate the economy. In other words, they’re just trying to do their jobs. That hasn’t stopped political partisans from putting enormous pressure on the Fed to goose the economy ahead of the 2020 election.

The economic expansion remains on track, albeit at a slowing pace. The Commerce Department reported today that U.S. gross domestic product (GDP) grew by 1.9% in the third quarter, surpassing consensus estimates of 1.6%. The better-than-expected GDP growth rate was largely fueled by continued consumer spending and greater federal government expenditures.

Regardless, there isn’t much the Fed can do about certain threats to growth. Business investment has been declining, but as Powell pointed out today, interest rates are not main factors in business investment.

Nor can interest rate levels significantly affect the Sino-American trade war, which is hurting third-quarter 2019 earnings. 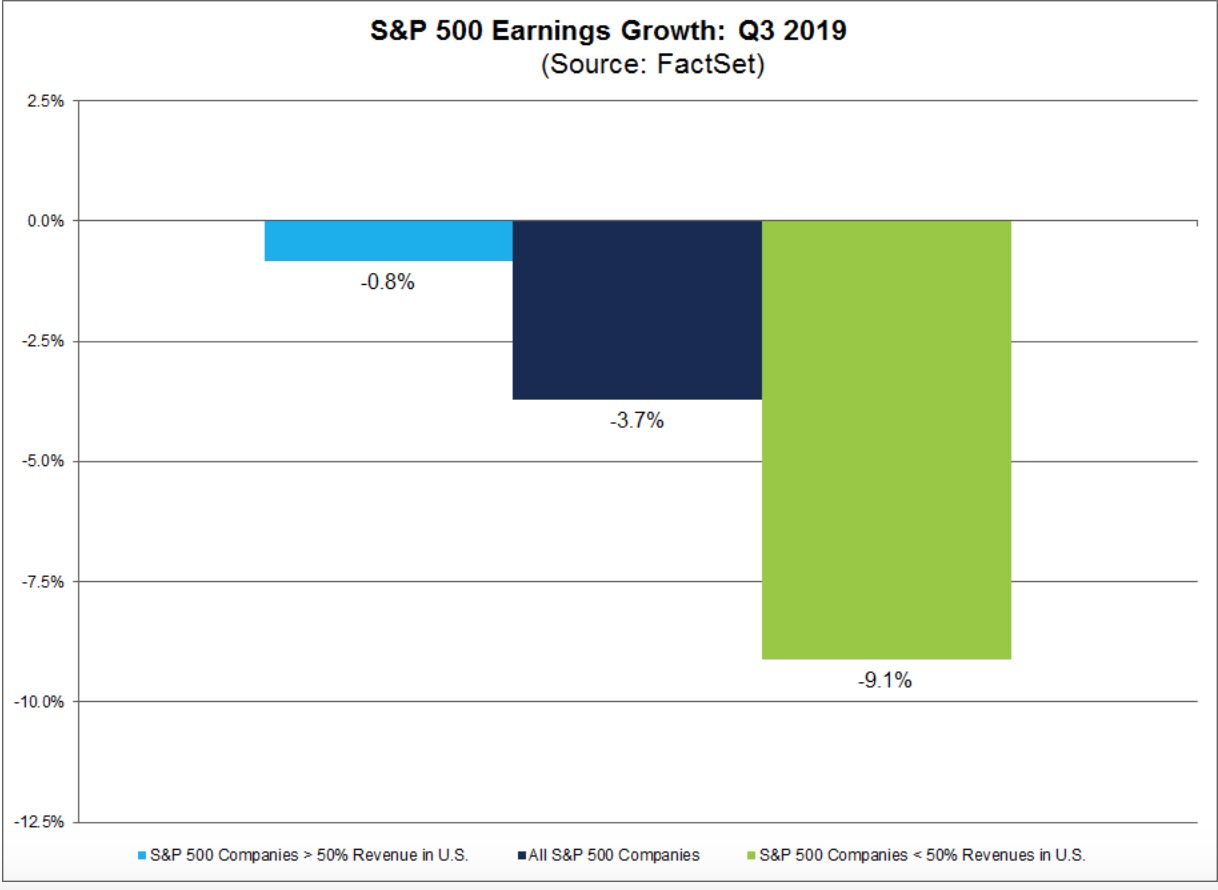 The negative effects of protectionism extend beyond the cost of tariffs. What’s under-reported in the media is how the weaponizing of trade policy is leaving scars on international relations and business confidence. Even if the trade war ended tomorrow (and it won’t), the psychological damage has been done and it will linger.

History tells us that trade wars often lead to shooting wars. The implementation of tariffs in the early 1930s worsened the Great Depression, strained international relations, and helped pave the way for the cataclysm of World War II. To protect your portfolio, reduce exposure to export-dependent multinational firms in the industrials sector.

The Fed and its counterparts…

Foreign central banks, such as the Bank of Japan and European Central Bank, have put interest rates in negative territory as a means to stimulate economic growth. Negative rates motivate banks to lend money, rather than sit on the cash and pay for the privilege.

Global debt with a negative yield now totals more than $13 trillion, with most of these bonds in Europe and Japan, both of which are struggling with sclerotic economies. By comparison, the U.S. bond market totals $42 trillion and the 10-year Treasury rate is 1.8%.

The White House has fiercely pressured the Federal Reserve to mimic foreign central banks and bring rates to zero or below, but the overseas and domestic economic situations are dissimilar. The concern in Europe and Japan is deflation, whereas inflation is rising (albeit modestly) in the U.S.

Unemployment in the U.S. stands at a 50-year low. Reducing interest rates probably wouldn’t accomplish much. Indeed, it would limit the Fed’s ability to mitigate the much-anticipated recession when it finally hits.

Read This Story: Want a Rate Cut? Careful What You Wish For

Demanding zero-or-below rates in America presumes that interest rates (which already are low) are holding back consumers and businesses from borrowing. Fact is, confidence is waning among shoppers and managers because of other factors, especially the trade war. Ultra-low rates wouldn’t magically produce demand.

From zero to hero…

To cope with current uncertainties, you should tap into powerful trends that transcend trade or monetary policies. One clear “mega-trend” is the worldwide implementation of 5G wireless technology.

The accelerating development of the Internet of Things (IoT) requires ever-faster speeds, made possible by 5G (“fifth generation”) technology.

The existing standard of 4G facilitated the smartphone boom, but 5G’s reach will extend even further. 5G will serve as the backbone of IoT by allowing several interconnected electronic devices and machines to communicate with each other instantaneously at super-fast bandwidths.

The chipmakers, equipment developers, systems integrators, and telecoms that dominate 5G won’t require zero interest rates to make big profits. These companies will be the investment heroes of the future. Click here for our special report on 5G.

Meanwhile, investors were disappointed today when supposed progress on a U.S.-China trade deal fell through. Once again, Lucy has snatched away the football from Charlie Brown. The simplest way to decipher what’s going on with the trade war is not to believe a single word that any politician says.

Print out this sentence and tape it to the wall near your computer: The trade war won’t end before the 2020 election.

But here’s the good news: rhetoric from Washington or Beijing can’t stall the advancement of trends such as 5G. Technological innovation has a way of overcoming obstacles, whereas political promises have a way of getting broken. Stay focused on the long term, not the news cycle.

John Persinos is the managing editor of Investing Daily. Send your comments and questions to: mailbag@investingdaily.com