Two months ago, I noted that Tata Motors (NYSE: TTM) had recently fallen below $9, its lowest share price in nearly 10 years. My conclusion: “I’m calling the bottom on Tata. I believe it has bottomed out and will soon be heading back up the charts.”

I ended that article by suggesting an options trade. Specifically, buying the $8 call option that expires in January 2021 for a $2 premium. I liked that idea so much that I executed that trade a few days later in my personal account. 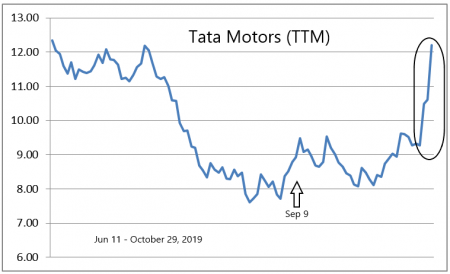 I hope you did, too. During the past week, TTM zoomed above $12 after releasing stronger than expected quarterly results. As I posited back in September, Chinese consumers are buying more luxury vehicles made by Tata Motors due to higher tariffs on vehicles made in the United States.

Tata Motors owns the Jaguar and Land Rover brands, both of which appeal strongly to status-minded consumers. Sales of those vehicles were up 8% during the quarter. And that’s before a new set of tariffs raised prices of American made cars by another 25% in December.

To be clear, Tata Motors still lost money during the quarter. However, the size of the loss was considerably less than expected. Also, the company could return to profitability early next year if the tariffs remain in effect.

That creates a dilemma for me and everyone else currently holding call options on Tata. That option I bought two months ago for $2 is now selling for $5. I could cash it in today and more than double my money.

On the other hand, that option doesn’t expire for another 15 months. I could be leaving a lot of money on the table if TTM keeps moving up the charts.

Rather than sell my option, I could elect instead to buy a put option on TTM to protect some of my gain. For example, a few days ago the $10 put option that expires on the same day as my call option could be bought for $1.50.

If I go that route, there are three possible outcomes that will determine how profitable this trade is for me:

The biggest threat to making money on this trade is a sudden end to the U.S.-China trade war. If that happens, I could lose all of my profit before I have a chance to cash it in.

Of course, that is the one outcome that I’d like to avoid. As an investor, nothing hurts worse than seeing a big profit suddenly slip away before you have a chance to grab it.

Locking in a Profit

Another choice is to sell enough of my call options to recoup all of my initial investment. That way, I would only be gambling with “house money” on how soon the trade war will end.

Even if the trade war ends tomorrow, I don’t think TTM would fall below $6.50. Tata Motors has retooled its product line and cut costs. Next year’s results should be an improvement over this year regardless of how the trade war turns out.

At the same time, a downturn in the global economy could put a crimp in Tata Motor’s sales in China even if the trade war abates. During the most recent quarter, China’s gross domestic product grew at its slowest rate since 1992.

If that trend continues into 2020, Chinese consumers may not buy as many luxury automobiles. That is already the case in India, Tata Motor’s other major market.

In September, sales of new passenger vehicles in India were 23.7% less than during the same month last year. Of all the vehicle manufacturers, Tata Motors fared the worst with a 49.9% drop in unit sales.

If something similar happens in China next year, Tata Motors would feel the pinch. For that reason, I don’t feel comfortable leaving my entire call option positon in Tata open.

I’m going to sell two-thirds of my position to lock-in a 50% gain in just seven weeks. I’ll let the other third ride, and hope that the Chinese economy does not go off the rails.

As you can see, trading options can be a tricky business. The potential profits are huge, as are the risks.

Maybe options aren’t for you. One way to make outsized profits is to buy the stocks of companies that are riding unstoppable investment trends. One such trend? The commercialization of marijuana.

That’s why we launched a new investment advisory that provides the latest, most promising marijuana plays available. This publication is called Precision Pot Trader.

We’re so confident about the money-making potential of this publication, we’re offering you a bold promise: if you don’t get 52 “turbo” pot trades from Precision Pot Trader in the next year, which averages out to a triple or quadruple-digit profit opportunity once a week, let us know and we’ll give you another year of the publication, on the house.

Want to find the best pot stocks, for market-crushing gains? Click here to get started.