The three branches of government in Washington, DC increasingly resemble a three-ring circus. The same description applies to our squabbling cousins across the pond in London.

I ordinarily downplay the significance of political shenanigans on the markets. But chaos (that’s not too strong a word) among the political classes in Washington and London is getting worse and currently poses a genuine threat to stocks. Below, I’ll pinpoint an appealing growth sector that’s largely immune to the political ruckus.

But first, for context, let’s turn our weary gaze to the endless bickering in Washington.

The full House of Representatives today is expected to hold its first floor vote related to its impeachment inquiry into President Donald Trump by voting on a resolution to formalize the proceedings. These proceedings will be televised, so brace yourself for a cable TV clown show.

Congress and the White House, mired in the acrimony of Trump’s impeachment, still have not passed legislation to fund most of the government after November 21. Political gridlock could lead to another government shutdown. We’ve seen this movie before. Growing numbers of analysts and investors are warning that a U.S. government shutdown would hurt stocks.

The S&P 500 currently hovers at record highs, but the bullishness is precarious. Another dangerous variable is the trade war. Neither political party in Congress likes the trade war, but the executive branch pursues it nonetheless.

The White House is attempting to finalize a partial trade agreement with China for Trump and Chinese President Xi Jinping to sign later this month. However, as of this writing on Thursday, plans are in a shambles.

China has thrown cold water on the idea of a trade truce, a development that’s weighing on stocks. In pre-market futures trading today, the three main U.S. stock indices were poised to open lower, amid a report today that Beijing doesn’t think a long-term trade deal can be struck with the U.S. (I don’t think so, either.)

Meanwhile, global economic growth is cooling and the damage of tariffs is showing up on Q3 earnings results.

The biggest political variable at work right now is the 2020 election. Policy pronouncements come and go, especially with the unpredictable Trump regime. But the president seems intent to pursue protectionism, to appeal to his base, all the way up to the election.

The election is still a long way off, which means a lasting resolution of the trade war remains a long way off, too. You should expect the markets to get whipsawed by trade tensions for at least another 12 months.

But there’s good news on display, too. A pillar of this bull market has been low unemployment, which currently stands at 3.5%. A robust job market has kept consumer spending buoyant.

Read This Story: Powell Speaks! So…What Did He Mean?

The Fed’s final 2019 meeting is December 10-11, at which time another interest rate cut is unlikely. But low interest rates and ultra-low joblessness are propping up the expansion (for now).

And then there’s Britain’s planned departure from the European Union, aka “Brexit.” Send in the clowns.

Britain is a major European economy and as such, damage to its economy washes onto our shores.

Collectively, the European Union is the world’s second-largest economy, in nominal terms, after the United States. In addition to tariff relief, the EU allows free movement among its 28 member countries for employment and commerce.

The June 2016 referendum for Britain to leave the EU, combined with London’s fumbling response, continues to generate uncertainty around the world.

The UK will hold an early election on December 12, but there’s no guarantee that the results will break the Brexit deadlock.

Brexit is weighing on the minds of the UK’s corporate managers. The research firm FactSet searched for the term “Brexit” in the conference call transcripts of the 67 FTSE 100 companies that conducted mid-year earnings conference calls between June 15 and September 14. 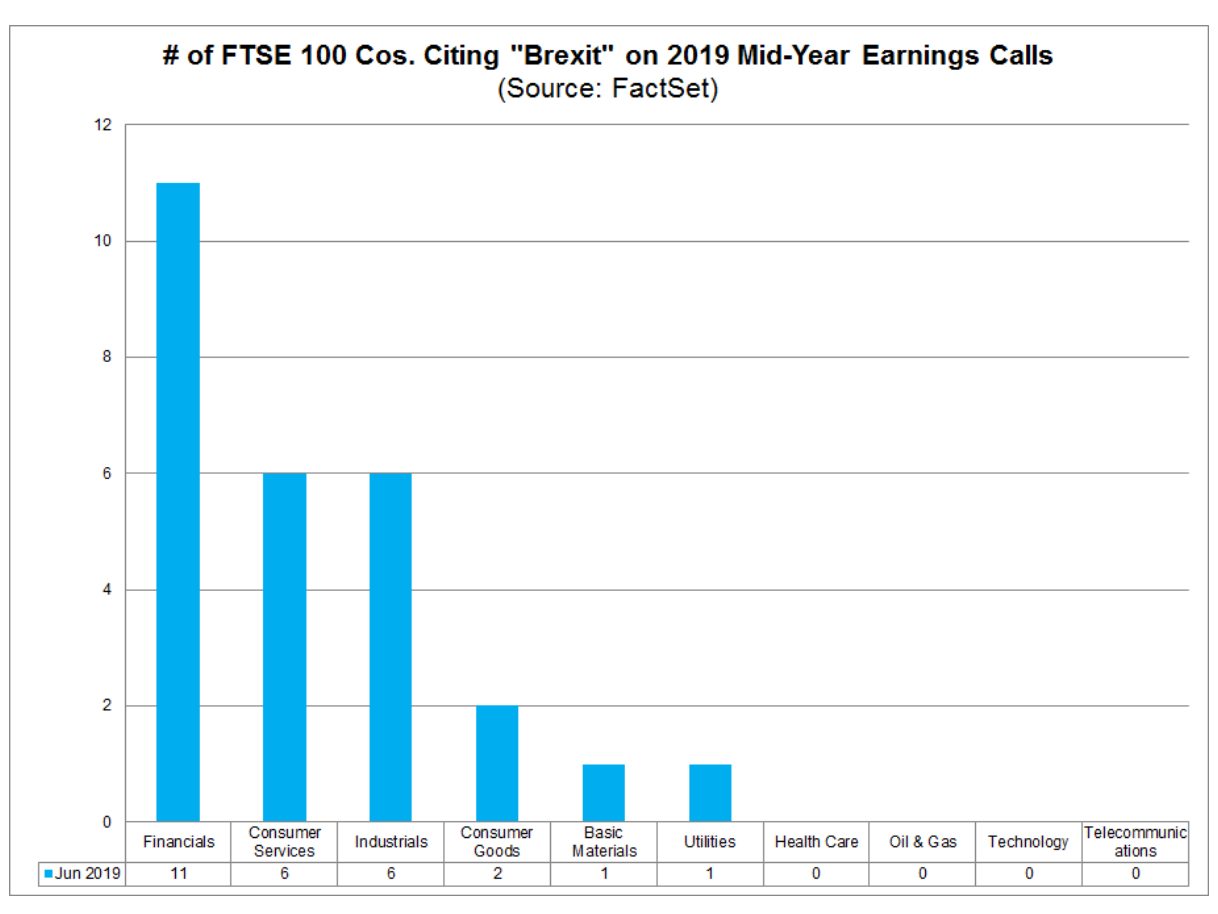 EU’s big banks now face serious trouble that will spill into the global economy. Deeply indebted and economically troubled countries such as Italy could be the first dominoes to fall, with European banks unable to act as backstops.

As Britain’s government flails and expectations for an orderly Brexit wane, look for the European financial services sector to hit a bad patch of turbulence. It’s a particularly pressing concern for London, the financial services hub for the Continent. Big banks already are fleeing to competing cities, such as Paris and Berlin. This anxiety in the financial sector is reflected in the above chart.

The EU this week granted Britain’s request for yet another extension to the Brexit deadline, until February of next year. EU negotiators are expressing impatience (if not contempt) with Britain’s paralysis on Brexit. Europe’s attitude toward Britain right now seems to be: just go, already.

A coping mechanism for investors…

So how can you cope with these political headwinds? Turn to marijuana.

No, I’m not suggesting you actually imbibe marijuana (although as John Lennon sang: whatever gets you through the night). Rather, I strongly suggest that you consider investing in marijuana stocks.

As with the gold rush of that bygone era, some green rush investors will get rich and others will go bust. But the fact remains, marijuana commercialization is one of the most exciting investment opportunities that you will witness in your lifetime.

Problem is, many marijuana investments are risky penny stocks destined to go bust. To discover the right way to invest in marijuana, click here for a free presentation.

John Persinos is the managing editor of Investing Daily. He also serves as editor-in-chief of Marijuana Investing Daily. Questions about pot stocks? You can reach John at: mailbag@investingdaily.com